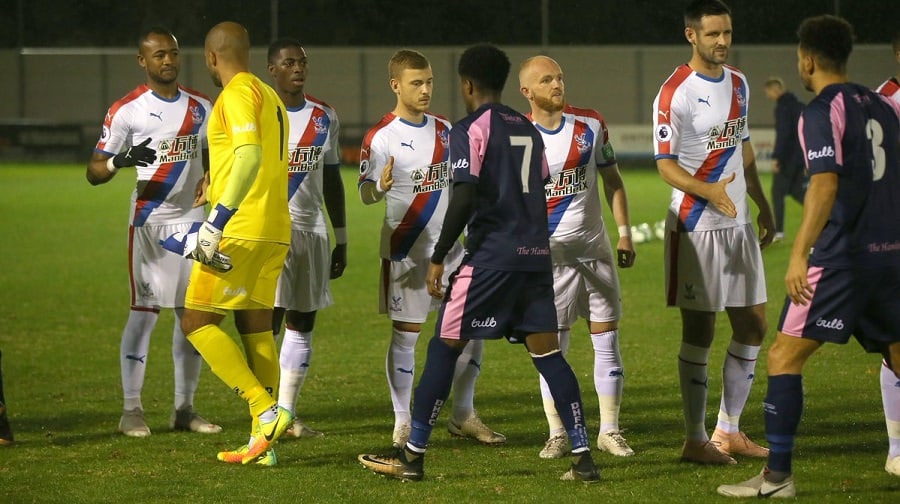 VENTURE BEYOND the bobbling rows of knitted pink and blue scarves, past the lingering alleyways and peach terraced houses, and you’ll find the sleepy turnstiles of a stadium that is home to London’s alternative football culture.

Dulwich Hamlet is both a time capsule from the lost terrace culture of the 1980s, when burly men would stand by the pitch and drink Buckfast in the stands, and an advert for what the football of tomorrow could look like.

The club is an enclave of reasonableness and moderation in a Premier League era that has long since out-priced families and showed distrust toward its own fans. Hamlet may not be currently playing in gentrified East Dulwich, but the club continues to attract a diverse fan base of men, women and children whose most vicious taunts seem to be to label the opposition goalkeeper a Lib Dem.

Hamlet advertised Thursday night’s friendly against Roy Hodgson’s Crystal Palace with their traditional arthouse film posters encouraging fans to attend as “Dulwich Hamlet will not be televised.” For so long a bastion of community activism, the fear remains that the cameras will soon stop rolling and the lights will dim at a club that has existed since 1893.

Financial insecurity is unfortunately part of the club’s identity. It was famously minutes away from bankruptcy in February 2014 when an unpaid utility bill saw the the gas turned off at Champion Hill. While the club has stabilised today, with a fan-led fundraising group called the Dulwich 12th Man Scheme helping to finance the arrival of 20 players, Hamlet is still alleged to function at an operating loss of £170,000 per year.

Defeat away to Eastbourne Borough in the FA Cup last weekend confronted the club with its latest financial challenge. Not only did manager Gavin Rose’s side lose out on £15,000 of prize money but their scheduled league opponents for a home fixture the weekend after this progressed in the competition. As a result, Hamlet faced the grim prospect of an October without a single home match or pound taken in ticketing revenue at its temporary abode at Tooting & Mitcham’s Imperial Fields.

For a club that has shown solidarity with the LGBT community, supported food banks and campaigned for the living wage, it was Hamlet’s turn to be on the receiving end of a little charity. As Palace manager Hodgson reflected in his post-match interview on Thursday, Eagles chairman Steve Parish “has been very keen to support the club” and embrace “the Dulwichs, Kingstonians and Tootings of this world that need this nation’s support.” When Hamlet chairman Liam Hickey contacted Parish, last night’s gala friendly was quickly arranged.

For a bumper crowd of 1,226 on a rain-strewn Thursday evening – each dispensing a precious £10 into the club’s coffers – Hamlet officials were not afraid to play up to stereotypes. The club’s support is often parodied as a collection of carrot baton and hummus-wielding hipsters. For all fashions, all flavours: “If you don’t like the Bovril, there’s a Lebanese stand round the back”, announced the stadium tannoy.

This was a jukebox of a game, a swirling mix of different football tunes, styles and tactics that kept punters consistently entertained. Palace started the match with the greater attacking verve, channelling attacks down the right flank where the clever interplay of Max Meyer and Welsh international Jonny Williams spliced open a corridor of space between Hamlet left-back Nathan Green and centre-half Michael Chambers.

It was into this corridor that the irrepressible Williams, deployed to superb effect by Palace manager Hodgson as as an inside playmaker coming off the the right flank, sprayed a skidding ball for Palace forward Jordan Ayew to run onto after only two minutes. Ayew’s tame shot was saved by goalkeeper Preston Edwards and his follow-up blocked off the line by defender Magnus Okuonghae.

Hamlet, to their credit, did not let these early warning shots temper their attacking intent. Rose had lined his team up in a 3-5-2 formation, with wing-backs Green and Quade Taylor pressed high up the pitch and serving as the team’s main attacking outlets. They were serviced throughout the night by the impressive Nathan Ferguson, Hamlet’s midfield metronome, who chipped perfectly-weighted balls to either flank with no little panache.

If no joy was to come from this tactic down the left-flank where Palace right-back Joel Ward cannily blocked out the supply to Dominic Vose, it was Taylor’s incisive ball down the right which produced Hamlet’s first opportunity of the game after eight minutes.

Hamlet forward Kingsley Eshun quickly latched onto the pass, his roaring pace giving the impression of a man fizzing across the rain-sodden pitch like an exploding hockey puck, before he lifted the ball past Palace goalkeeper Julian Speroni’s right-hand post and wide.

As Hamlet pressed forward, Green and Taylor playing almost as second strikers, it was their attacking intent that proved to be their undoing. The match was only fifteen minutes old but it was already clear that Williams was running the show, providing those ephemeral moments of class in which, above the mêlée of bustling feet, the game seems to take on a clarity, a stillness.

It was Williams’ curled ball down the Palace right that released Ward to square for forward Sullay Kaikai. Kaikai’s clever lofted pass to the left found Meyer making a bustling diagonal run into the box. From there, the German international displayed a heady mix of serenity and speed. A delicate touch with his left foot killed the ball dead and shifted the weight of the attack onto his right foot. A quick swirl of a boot saw a beautiful curled finish into the top corner past Preston Edwards in goal.

As the game progressed towards half-time, it was Palace striker Kaikai who assumed the mantle of all that was good in the Eagles’ play. Coming deep to collect possession, the 23-year-old native of Southwark moved the ball across the pitch’s green carpet with all the bend, guile and whip of a snooker player manipulating the white, a searing shot from 30 yards making it 2-0. Moving away from goalkeeper Edwards with outward curl, it was one of those strikes that seemed to merit the rainbow trails that shoot out of the ball in video games.

If the first half was all about deft touches and repressed gasps of delight from the rain-soaked stands, the second period was a raucous affair, a brawny encounter of physicality. Palace forward Connor Wickham returned to the fray after 23 months out of action. He provided both a mesmeric and mischievous pirate-like presence up front, crashing around the pitch like a souped-up dodgem car, elbows flailing and temper raging.

Wickham was, quite simply, fantastic – though Hodgson later asked the journalists present to keep his performance out of the headlines. A Kaikai corner in the 60th minute was met with a cannon of a header from Wickham, the ball thrashing against the underside of the crossbar, back up off the goal-line and into the top of the net.

It was a tearing run from Wickham that was to make it 4-0. Set through one-on-one by a measured pass from Jason Puncheon, the striker’s lobbed finish struck Edwards’ shoulder before looping ominously towards goal. An Ashley Carew bicycle-kick clearance off the line was impressive yet to no avail, as the ball fell to Palace youngster James Daly who side-footed into an empty net from two yards.

With the league trip to Hungerford Town on Saturday in mind, with 25 minutes left Rose brought on a small army of substitutes to rest a number of key men. The remainder of the game descended into a Bovril sort of affair, a version of aerial trench warfare with both teams launching searching balls into each other’s penalty areas. This produced Hamlet’s best chance of the match when Gavin Tomlin climbed above the returning Scott Dann to force a superb Julian Speroni save.

Palace’s Irish youth international Kian Flanagan had spent much of the second half providing a passable impression of Andros Townsend. This is no criticism, as Palace’s Scholar of the Year for the 2016-17 season showed breathless pace and no little trickery. The youngster, reportedly on the radar of Liverpool and Manchester United, gave the crowd one last hurrah for the road. Collecting the ball in the half moon that abuts the penalty area, a swotted strike from his right boot sent the ball rising into the top corner.