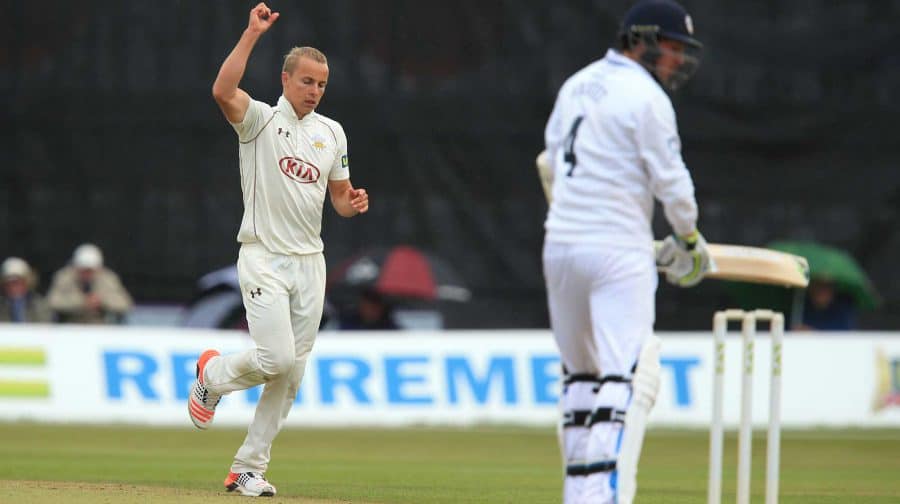 A stunning return of seven wickets for 20 runs from paceman Tom Curran helped Surrey defeat Gloucestershire at the Kia Oval this week.

The 20-year-old ran through the visitors order to help skittle them out for a first innings total of just 113, well short of Surrey’s first innings return of 448. It also allowed Surrey skipper Gareth Batty to enforce the follow on, something he took advantage of, and the visitors fared little better second time around making just 155 as the Kennington side picked up more crucial County Championship points. The final victory margin was a comprehensive one of an innings and 180 runs.

The result leaves the Kennington squad in second spot in the second division with Surrey, Lancashire and Glamorgan looking set to duke it out for the two promotion places this season.

When Surrey batted Ben Foakes, with 118, and Dean Elgar, 98, did much of the scoring as Surrey put the West Country attack to the sword. Surrey finally picked up another T20 win in the last week and once again it was largely down to Jason Roy, who perhaps has not been at his best when on England duty in recent weeks.

But back in the familiar colours of his county the opener once again was the mainstay of the Surrey batting line up, scoring 61 off 47 balls in his side’s total of 146. The Surrey attack did enough to defend this against Glamorgan in their own back yard, thanks largely to veteran all-rounder Azhar Mahmood who picked up three wickets for fourteen runs in his four overs.

The win lifted Surrey off the bottom of the south qualification group and they will hope it is a sign of better things to come in the tournament, as the win was only their second in eight outings. The Kia Oval side were back in T20 action last night, on home turf, where they took on Gloucestershire once again. For the result of that game, which finished after the News went to press, and the latest about the club visit www.kiaoval.com.