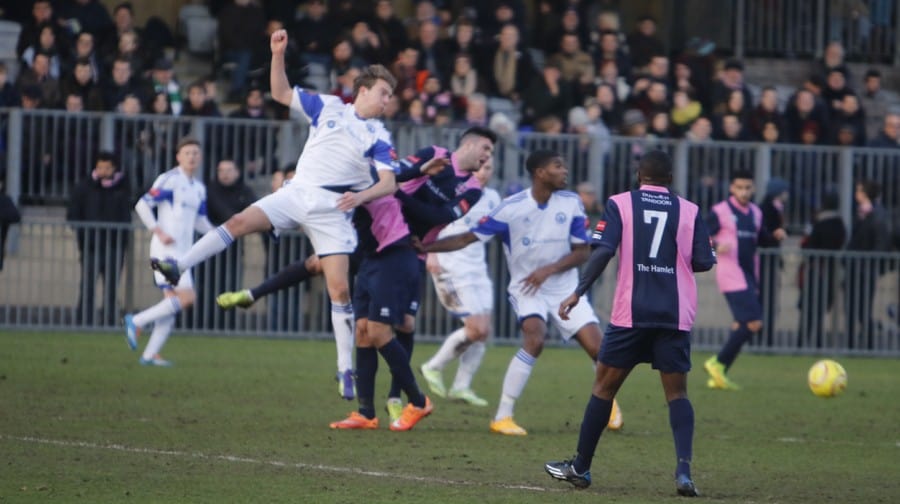 Striker Tom Derry has been brought in at Champion Hill as Gavin Rose continues his search for regular goals up front.

The 20-year-old, who made his Hamlet debut against Met Police last Saturday, has joined from Conference South side Hayes and Yeading having started this campaign at Aldershot Town.

Rose said: “He is a natural goalscorer and was a player who was at Charlton in his development years. “Since he has turned professional he has moved to few clubs and I think he is somebody who is looking for a new home where he can settle and push his career on from there.”

He added: “For us we need somebody who will score goals and that is what we hope he does for us. He worked hard on Saturday. “Chances were limited for him due to the nature of the game but he did ok.

He will be with the team all week before the Bognor game so the players will learn more about him and he will learn more what we want from him. “The plan is to have him at Champion Hill until the end of the season and we will see how it goes from here on in.”

As one striker joins Dulwich, another, in the shape of Whitehawk loanee Serge Makofo, will not be extending his stay at the Southwark club. The Hamlet manager said: “We were not happy with his performance in the Lewes game in terms of effort.

People can have good or bad days but the minimum you can expect is that players will make a good effort. “That can happen with players you have in on loan sometimes and he is with us for another week but we won’t be looking to extend his deal beyond that.”

Nyren Clunis’ expected return to the Dulwich squad last Saturday did not happen but Rose explained that this was just the management team readying him for other battles this campaign.

The Pink and Blues boss said: “We have been in a situation a lot where we are getting him [Clunis] back for games and although he was close to playing against Met Police we took the decision not to, again as a precaution really. “We want him ready for the final ten games of the season so we decided that it would be better he was ready for that than to play last weekend.”