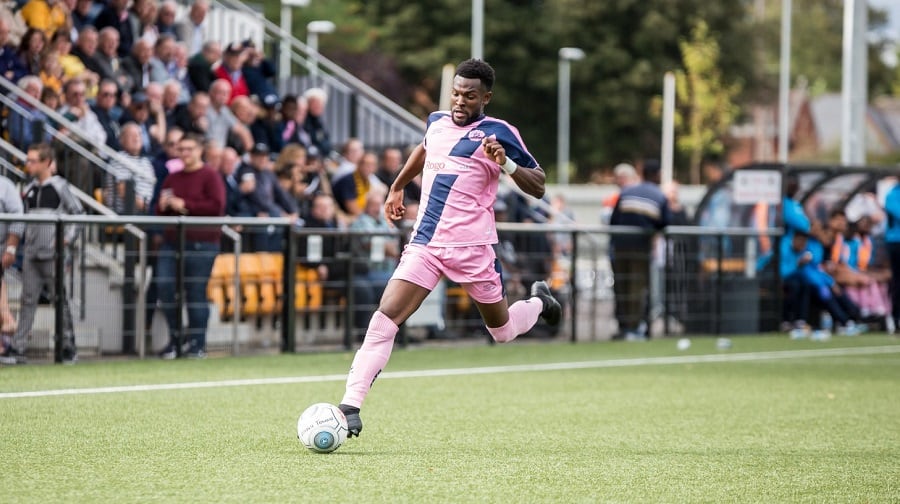 ANTHONY COOK was dissatisfied following his side’s draw with Wealdstone FC last weekend, despite his match-saving wonder strike in the 1-1 draw.

Hamlet picked up their eighth point of the season when Cook ran from halfway before firing home from outside the box with ten minutes left.

Gavin Rose had demanded a reaction from his side after the 2-0 home defeat to Hampton & Richmond Borough in their previous game at Imperial Fields in Mitcham.

“Last week the loss was very disappointing. So the gaffer rung the changes, put in a few new signings, it just freshens it up a bit and means people can come in with no pressure on them,” Cook told the News.

“Obviously going into the final ten minutes 1-0 down we’re hoping we can get one back, and that came. But there’s always disappointment when you don’t win a game.

“Even though a point is better than nothing, we really do try and go out to get that three points every time, and the gaffer sets us up to try and win. So while it’s always good to get a point, there’s always room for improvement.”

Cook was pleased with how the side battled after going behind.

“In football it’s going to happen at one point or another,” he continued. “It’s something where we have to look at ourselves individually if we want to get back into the game.

“We can’t ever let our heads go down and we don’t want characters like that. So we have to look at ourselves. You have to do what you’re good at. The gaffer’s signed you because he sees something in you and you have to try and bring that to the game.”

Cook scored his goal after coming off the bench. “It’s about coming on and trying to be positive. We’re 1-0 down, I came on in one of my natural positions. I’m always confident when I’m playing there. When I face up to someone and I get at them I always back myself to get a shot off, and I scored.

“That’s always a good feeling but it would’ve felt better if we’d got the three points and it was the winner.”

Cook will be hoping to take his goal-scoring form into this Saturday. The south Londoners face a huge test away at table-topping Woking.