Haye - “What he did in there tonight, not many heavyweights in the world could put a performance together to stop and grind down someone as tough as Ian Lewison.” 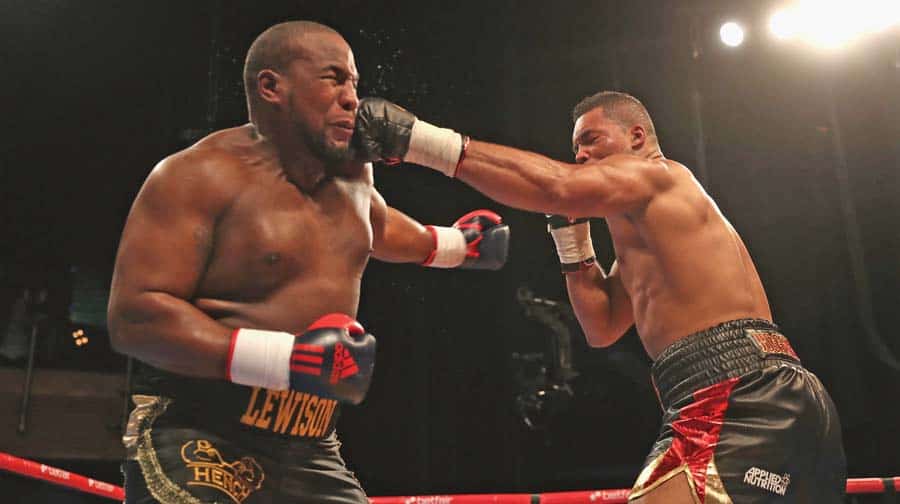 LONDON, ENGLAND - OCTOBER 20: Joe "Juggernaut" Joyce in action as he beats Ian Lewison in the Heavyweight Fight during the Hayemaker Ringstar Fight Night at O2 Indigo on October 20, 2017 in London, England. (Photo by Christopher Lee/Getty Images for Hayemaker Ringstar)

The 36-year-old East Dulwich-born heavyweight was involved in an uphill struggle before finally succumbing to an eighth-round stoppage loss.

Trainer Don Charles very wisely threw in the towel at 2:35 of that round after seeing Lewison worn down doggedly by the 2016 Olympic boxing super-heavyweight silver medallist from Putney, who is managed by Bermondsey’s former WBA world heavyweight champion David Haye.

The contest itself headlined the Hayemaker Ringstar Fight Night promotion which was televised exclusively live on Dave TV. “It didn’t go according to plan, it is what it is,” admitted a dejected Lewison who suffered his fourth professional defeat in seventeen outings. “The eye totally closed out and I couldn’t see punches coming in. During the course of the fight my ankle went – it all went wrong.

“We had a strategy which I was working towards. I wasn’t going 100 per cent to plan but it would have been implemented more as the fight went on. But unfortunately the thumb in the eye happened.”

Haye, who is preparing for his rematch with bitter rival Tony Bellew at The O2 on December 17, was impressed with “tough” Lewison as he praised his fighter. “Believe me, tonight was only 30-40 per cent of what I know he has,” he said. “This is his first professional fight. “What he did in there tonight, not many heavyweights in the world could put a performance together to stop and grind down someone as tough as Ian Lewison.”