Hamlet took inspiration from fans of their south London neighbours 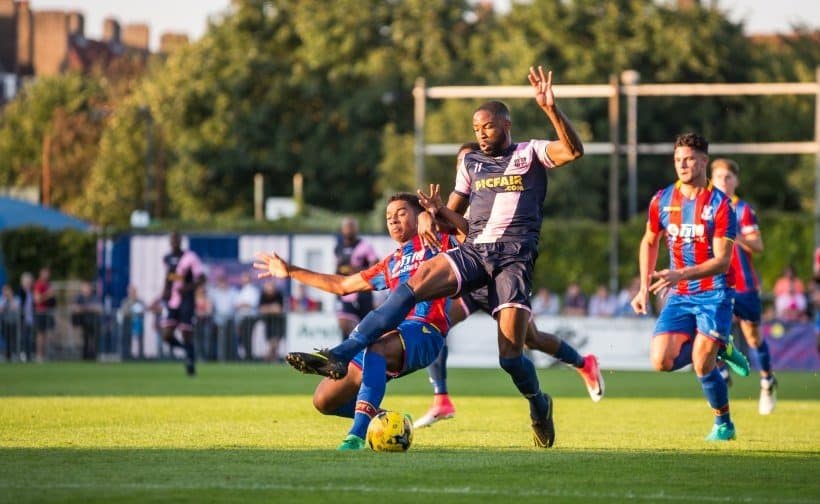 Dulwich Hamlet fans will walk from Selhurst Park to Champion Hill to raise awareness for mental health and male suicide in support of the CALM charity (Campaign Against Living Miserably).

The walk will take place before Dulwich’s friendly against Crystal Palace at Champion Hill on July 27, and will possibly involve ex-Hamlet and Palace player, Andy Gray, and former Palace manager, Alan Smith.

The event will be organised by Dulwich Hamlet’s community work arm, led by Rob Hyneman, who is also deputy head of Cobourg Primary School.

“Suicide is the biggest killer of men under 45 in the UK, which is staggering,” Rob said. “It proves that there’s a stigma attached to suicide, especially among men. People just don’t want to talk about it.”

He added: “We as a club do lots of initiatives within the local community, but we haven’t done anything to address mental health issues so far. This is a first step on that road.”

Rob also underlined the role of the fans in directing the club’s initiatives. “The beauty of this is that it came from a supporter of both Dulwich and Crystal Palace. That’s the key element of the club’s community side. It’s not about what I want, or what the club wants. It’s the initiatives that the fan base wants to support.”

But why does Dulwich Hamlet feel that it is the club’s duty to involve itself in non-football matters such as mental health?

Rob explained: “Dulwich is more than just a football club. The club is an integral part of the local community and we have a duty to make sure that we are reaching out beyond Champion Hill and making sure that we are including the local supporters in everything that we do.

“I think it comes back to the ethos of the club. Of course a football club doesn’t have to do it. A football club can just be 3-5pm on a Saturday. But that’s not the ethos of Dulwich Hamlet. We believe that we must do much more.”

Rob also pointed out that the club cannot rest on its reputation for community action. Sitting still is merely stagnation. “I’m a great believer that we’ve been streets ahead of other clubs in terms of our community work.

“But I’m also aware that lots of clubs are catching up now or doing some of the things that we do. So, we have to go out there and find things that are new and exciting and will engage our fans.”

But does attaching a mental health label to the event really mean that it has a positive effect? Rob was realistic about the impact that the walk can have, but insisted that even a non-league club like Dulwich can make a difference.

“It’s encouraged that you talk to people that you wouldn’t normally come across [during the walk]. Even if you’re walking with friends and family then the aim is to talk to additional people.

“Sometimes, for people that are feeling low in their life, just having someone there to speak to, be it a close friend or a complete stranger, can be extremely comforting and helpful.

“Of course, this walk isn’t going to solve all of the mental health issues in south London, but it’s a starting point and it gets the conversation going.

“As with all these initiatives, you never know [what difference it will make] until you do it. The walk may not necessarily bring someone back from the brink. It might just be a lovely afternoon where fans and their families from both clubs come together and enjoy the finer parts of south London.

“It’s a very simple way of showing the unity of the two clubs behind this cause.”

Rob also emphasised Dulwich’s role in inspiring other clubs to take up the initiative. In this way the club can make a contribution to the mental health cause far greater than the sum of its parts. Dulwich themselves have taken inspiration from Crystal Palace for this particular initiative. Palace fans completed a similar walk from their stadium to the Emirates before a match against Arsenal last season.

The walk starts at Selhurst Park at 11am and covers just over five miles, a realistic goal for even the less athletic fans who wish to attend. Mercifully, there will also be a half-hour pit stop at The Paxton pub from 12:20-12:50pm. The revelry will descend upon Champion Hill Stadium at roughly 2pm. Those eager to participate should keep an eye on the Dulwich Hamlet Community Twitter feed (see Twitter handle below), where further details will be posted this Friday.