Gavin Rose's side are thirteenth in National League South 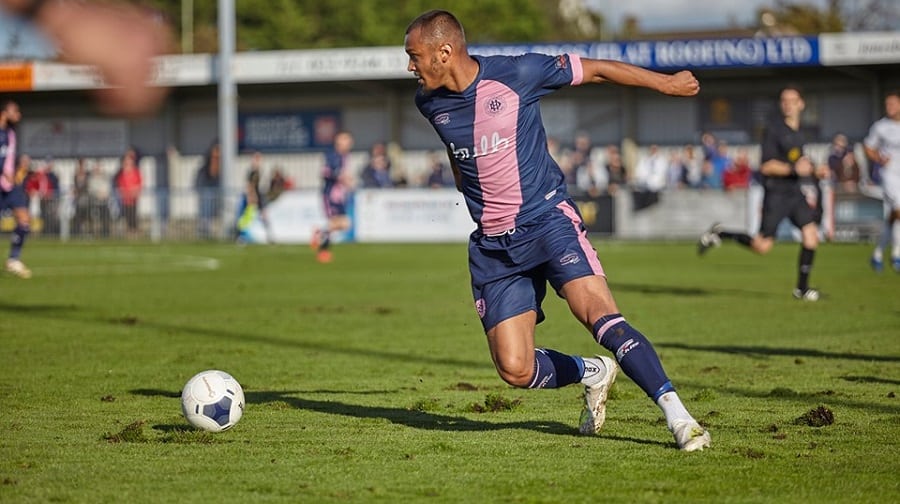 The Hamlet came from behind at Chelmsford. Photo: Ollie Jarman

Christian Smith scored for the third consecutive game as Dulwich Hamlet came from behind to earn a draw against Chelmsford City at Melbourne Community Stadium last weekend.

Smith equalised four minutes after half-time after Sam Higgins had given the hosts a sixteenth-minute lead.

A strong wind made it a game of two halves as Gavin Rose’s side battled back to gain a point that leaves them thirteenth in National League South, six points off the play-offs.

Chelmsford dominated the first half and should have been more than one goal up by the break. The Hamlet struggled to mount a serious attack on their opponents’ goal.

The home side had two early chances but Chris Whelpdale and then Barry Cotter fired wide of Charlie Grainger’s goal.

But Rod Stringer’s side were soon ahead when Frazer Shaw crossed and Higgins headed home.

Three minutes later Connor Hunte, who was doing his best to get his side going, found Aaron Barnes whose shot was blocked.

Grainger then saved from Higgins as City kept up their intense attacking play, before Billy Knott shot over.

Six minutes before half-time the visitors had a rare sight of goal as strikers Ade Yusuff and Danny Mills combined before the latter was crowded out as he tried to shoot.

Cotter was again off target and then a combination of Quade Taylor and Grainger prevented Dane Winfield doubling his side’s lead.

Following Rose’s half-time team-talk the Hamlet were a different proposition after the break.

It took them just four minutes to level. Following a corner and a goalmouth scramble when Smith and Taylor were denied, the former had a second bite and forced the ball over the line.

That goal boosted Dulwich and it was Rose’s side who looked the more likely to score next. They struggled to create any clear-cut chances until 20 minutes left when Hunte fired in a volley after linking up with Dominic Vose and Jack Connors, but goalkeeper Carl Pentney saved.

Smith had a chance to put the Hamlet in front in the 72nd minute but he headed wide of the far post.

At the other end Chelmsford were still a threat and had an opportunity to retake the lead but Shaun Jeffers sent a shot over from Michael Spillane’s cross.

Vose was next to threaten for the away side but couldn’t find the target. With twelve minutes remaining Barnes went clear but he tried to curl home and his shot went well wide.

Pentney saved Mills’ header as the opportunities continued to be spurned at either end. Whelpdale lifted an effort over the bar before Jeffers toed a shot wide.

Grainger, despite having picked up an injury, kept the sides level by saving from Chez Isaac.

And Grainger then ensured his side left Essex with a deserved point when he again denied Whelpdale before the same player shot over with the last chance.

Dulwich host Bath in the league this Saturday. Kick-off is 3pm at Champion Hill.