Dulwich Hamlet boss: ‘This is the fans’ reward – we want to make them proud’ 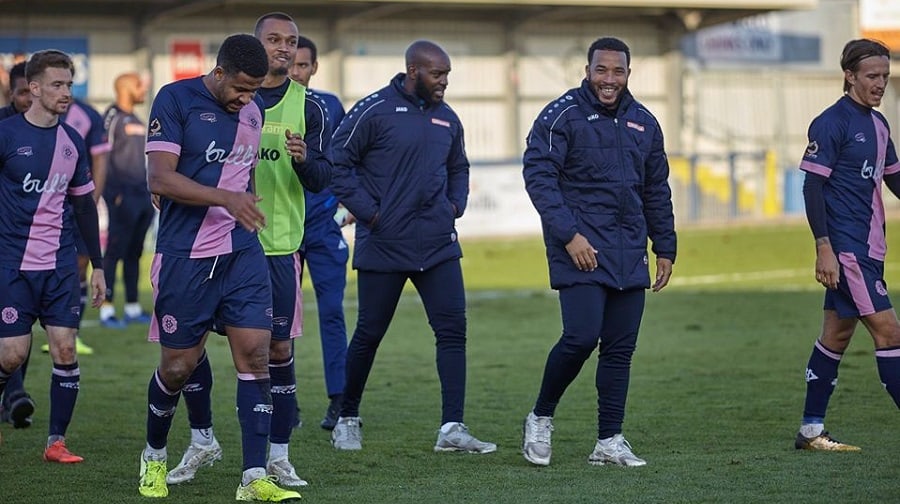 Gavin Rose, centre, with Junior Kadi on his left and the players after reaching the first round. Photo: Ollie Jarman

Dulwich Hamlet boss Gavin Rose has urged his players to have “no regrets” as they aim to pull off an FA Cup giant-killing act that would see them reach the second round for the first time in their history.

The Hamlet host League Two Carlisle United at a sold-out Champion Hill on Friday night in a game that will be shown live on BBC Two.

On Thursday, the club’s car park was filled with trucks carrying broadcast equipment as plans continued to ready a ground that will also accommodate 500 away fans.

The club are used to the attention given the story of their exile from Champion Hill made national headlines, and Rose is confident all the extra focus won’t affect his team.

“The staff and the players are fine, we haven’t really made a big deal of it,” Rose said. “We’re very well aware that the game has to be played tomorrow and everything that goes on in and around it is great, but we need to focus on what we can do and what we’re here to do.

“Everyone’s quite relaxed, we’ve prepared the same way we always do. We’ve not made a big song and dance about it. We have our obligations to do media and we’ve carried that out.

“The players that have been here a little while are used to attention. Everyone’s quite familiar with it. We get good gates for our level and will probably have another thousand on top of our average. The players are used to those numbers.

“The cameras will be different, but I wouldn’t be thinking about that, my focus is on the game.”

Dulwich haven’t won in the league since August 24 but their knockout form has been imperious. They defeated AFC Croydon Athletic in the London Senior Cup before navigating through three qualifying rounds of the FA Cup to land a first-round tie for the first time since 1998. The Hamlet celebrate progress through to the first round. Photo: Ollie Jarman

“The wins have been coming in the FA Cup,” Rose continued. “If I were to be asked what I’d prefer, I’d prefer to be up the table, to be honest.

“But I also understand that for the players they don’t get into the first round of the cup every season, so this really is for them. I hope they go out and enjoy it, express themselves and have no regrets.

“Then we’ll focus on the league again and try to get better.”

Rose and his assistant Junior Kadi went through final preparations with the squad in their last training session on Thursday before their clash against United.

This is the biggest game in the careers of most of the players, and there will naturally be disappointment for those that won’t be involved.

Rose said: “We went through a shape that looks like the team, and a few who weren’t playing showed a little bit of disappointment. This is normal. It shows you that the game means a lot to them.

“I always think you prepare yourself in a way that you’re always ready for a game no matter what the level of the game. This is a massive game for them and to be fair to them they’ve treated the week as normal.” Carlisle bring a squad on the 320-mile journey south that is packed with Football League experience. Byron Webster twice won promotion from League One, with Yeovil and Dulwich’s south London neighbours Millwall.

Boss Steven Pressley played for Rangers and Celtic and has managed Coventry City and Fleetwood Town. In Kelvin Etuhu they have a player who scored in the Premier League for Manchester City, but Rose believes home advantage could be a key factor.

“They have people who have done really well, Pressley at Rangers and Webster at Millwall. They have good football people,” Rose said.

“But at the end of the day I don’t think they’ll be overly looking forward to coming to south London on a Friday night, there’s going to be a big crowd, an upset could possibly happen. That’s not what they’re looking forward to and we’ve got to play on that as much as possible.

“If we can get that right we’ll go from there.”

Like the majority of football fans who grew up in the 1980s, the FA Cup is close to Rose’s heart.

“I can remember way back Sutton beating Coventry,” he said. “It’s massive, having that tradition of giant-killing, giving the lower guy the opportunity, a David v Goliath scenario.

“I remember the FA Cup final build-up days, no one could get me away from the TV. It is romance, it is fantasy. Maybe it’s changed a little bit, we’re older as well. I don’t know if the kids see it the same way.

“But that seed that was planted in me when I was younger is still there.”

Rose, who is in his tenth year managing Dulwich, has known his fair share of knockout heartache, losing five times in five play-off campaigns.

At the sixth attempt, their fourth consecutive time in the Isthmian League Premier Division play-offs, the Hamlet defeated Hendon 4-3 on penalties to reach the sixth tier of English football for the first time.

Rose doesn’t think the Carlisle tie is the biggest he has been involved in.

He explained: “The ones to win a league – we won a league title (Isthmian League Division One South) on the last day – or a play-off final, they’re bigger for me because that’s 42 games or 46 games in a season. This is a one-off and you want to do as well as you can, people are watching.

“We’ve got a mentality for these one-off occasions, we know how to approach them. That, I’m hoping, will stand us in good stead going into this game.” Hamlet fans, many of whom rallied around the cause when their club was threatened with extinction less than two years ago, are dreaming of another special Champion Hill night.

“I grew up around here, but I moved away about ten years ago. I see a few friends around here and bump into people, and everyone is giving us well wishes and saying how proud they are the local club is competing at this level, which is really good,” Rose said.

“We’ve had a lot of people buying tickets. It’s great seeing people have smiles on their faces through football and having optimism through football. That’s what you do it for, you want to make people go, ‘wow’. That gives you a good sense of achievement.

“For me, this game is for them. They stuck with the club in some really low times, times when they actually kept the club alive. This is their just rewards and we hope to really put on a show for them that they can be proud of.

“Hopefully we can win the game and they can have another day. The way I look at it is this game is more for them after what they sacrificed.”

Southwark NewsSportDulwich Hamlet boss: ‘This is the fans’ reward – we want to make them proud’