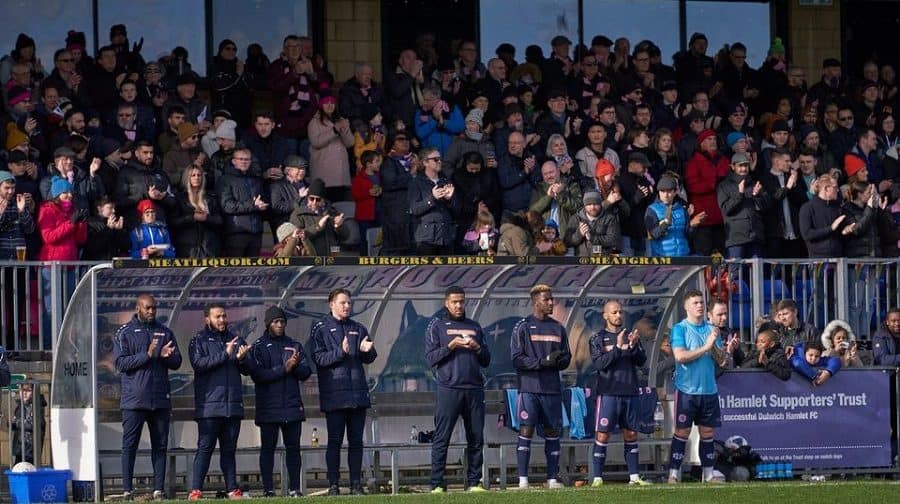 The last time fans were at Champion Hill was for the game against Hemel Hempstead on March 14, 2020. Photo: Ollie Jarman

DULWICH HAMLET chairman Ben Clasper has said that even with fans back at Champion Hill the club will make no money on match-days – and warned the government they will need more funding next year.

Following London being placed into Tier 2 of the new regional restrictions, the Hamlet can have up to 600 supporters back in East Dulwich.

League One Charlton Athletic welcomed back fans for their game against MK Dons at The Valley on Wednesday night, while Millwall are preparing The Den for a crowd of 2,000 when they host Derby this Saturday.

After plans to have fans back at games from the start of the National League South season in October were shelved, fifth- and sixth-tier clubs agreed a financial package worth a total of £10million with the government.

However, Dulwich were one of nine clubs – along with AFC Fylde, Telford, Chester, Hereford, Kidderminster, Maidstone, Dorking and Chesterfield – to call for the resignation of National League chairman Brian Barwick over the distribution of the money.

The argument was over clubs being allocated money with no account taken of average gates, meaning those such as Dulwich would receive less money than they would normally earn on match-days. The Hamlet were allocated £36,000 per month over three months.

Dulwich had the highest average attendance in National League South last season, the only club in the division with an average of over 2,000. There were 2,376 supporters at Champion Hill for their game against Hemel Hempstead on March 14 before the league was suspended.

Clasper has warned the government not to think that just because fans have been allowed back into stadiums at reduced capacities, that means their money worries are over.

“We make nothing behind closed doors, we’ll make nothing with 600 fans,” Clasper told the BBC. “Or a minimal amount, but it probably won’t cover the costs.

“So what we’ve got to make sure is that the sources of funding that are still in place, being promised for the start of next year, don’t go away.

“If the government think they have opened the gates, and therefore the clubs are okay, they’ve got a rude awakening about to come.

“We make more with food and drink than we make with gate receipts. If the rumours are true and it’s ratified that we won’t be able to serve any food or drink, and if the number is under our season-ticket number, the season-ticket holders, then we will make nothing on match-days.” 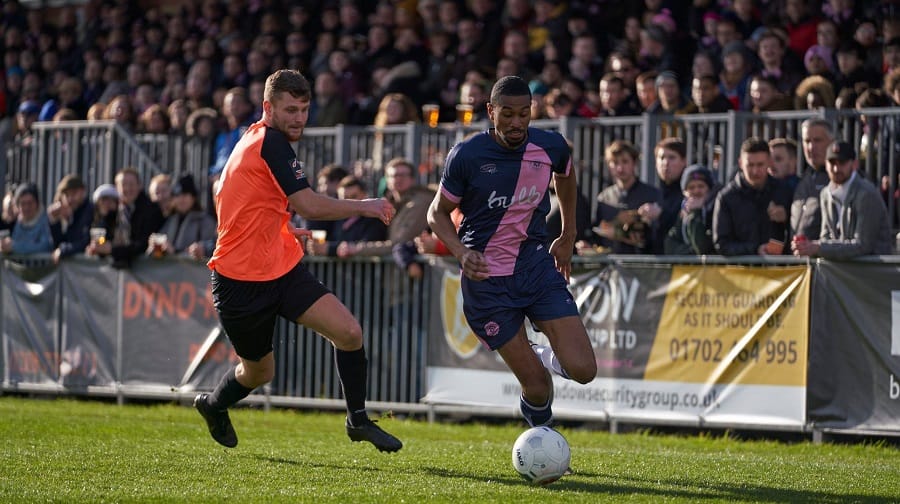 Danny Mills in action against Tonbridge Angels in 2019-20 in front of 2,663 at Champion Hill. Photo: Ollie Jarman

Dulwich’s first game with fans back at Champion Hill is set to be next Tuesday with Eastbourne Borough the visitors to south-east London.

However, the club have been dealing with another issue that has seen their last two home games postponed, due to a floodlight pylon on the pitch.

Dulwich said: “Unfortunately, contractors were unable to rectify the damage in time and so the [matches] will now be played at a future date.

“As soon as we have been able to agree it with our opponents and it has been testified by the league we will inform all fans.”