Dulwich Hamlet come from behind at Hungerford to maintain unbeaten run 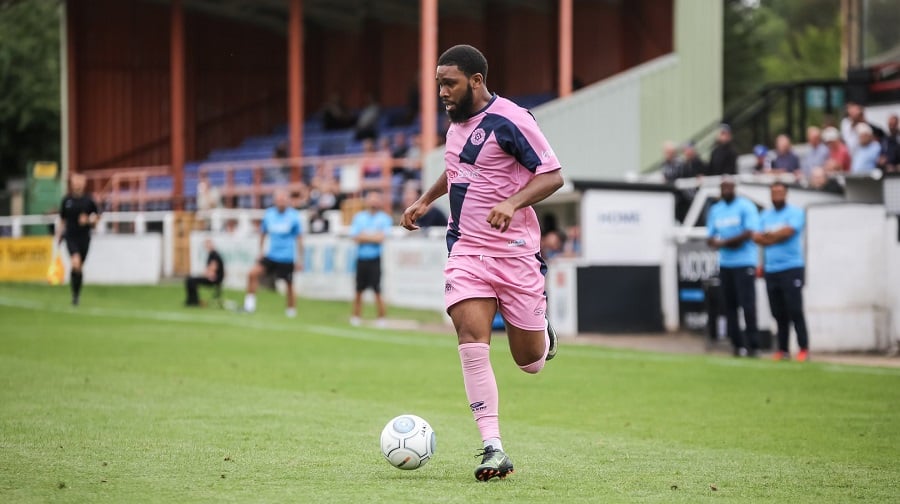 IT WAS like a scene from Hot Fuzz, that movie in which Shaun Pegg’s supercop finds himself disorientated when swapping the hubbub of London for a quaint village in Gloucestershire that it soon turns out has a sinister side.

Unlike Hot Fuzz’s imaginary village of Sandford, Hungerford is in Berkshire, yet this manicured little town also has its eerie side.

Deposited by the 12.07 from Paddington into the sheep-bordered fields of Hungerford, there was something quite surreal to seeing Hamlet’s small army of pink and blue metropolitan supporters descend upon the village’s sleepy country lanes. The experience was also slightly haunting: fans whispered stories to each other of the infamous 1987 massacre that happened here, when 27-year-old Michael Ryan shot 16 dead before turning the gun on himself.

On the way to Hungerford Town’s Bulpit Lane, the fans passed the primary school where Ryan finally took his own life. Upon arriving outside the ground’s pokey turnstiles, the first thing their eyes were to come across was the memorial that the club has dedicated to those who passed away. On the field, the pattern of play soon came to mirror the fate of a battle-wary population that has long waged an attritional struggle against memories of the past. This was a grinding match of trench warfare, a game of launched balls and grinding tackles. In this high-octane chaos, Hamlet came out 2-1 winners. Just.

Amidst the rural silence of this affluent market town, all that was to be heard in the opening minutes was the oomph of balls hoofed long and the penetrating bark of Hungerford’s assistant manager, Kevin Watson. Hungerford had lost four league games in a row and, seemingly aware of his team’s low confidence, Watson seemed intent on choreographing each of his team’s moves, directing the trajectory of each sliced pass, lobbed ball and drilled corner.

Hungerford’s tactics were reminiscent of all that was best in Sam Allardyce’s Bolton Wanderers side, an impression added to by their wearing white shirts and black shorts. Direct angular balls from full-back to striker found apt reward in a tentative Hamlet defence, with a supporting cast of Hungerford midfielders buzzing around the box to feed like a shoal of piranhas off a state of engineered disorder.

Within two minutes, this aerial bomber football had Hamlet on the back foot. Hungerford captain James Rusby whistled a flat-arched, muscular torpedo of a long throw into into the penalty area, which Hamlet defender Michael Chambers could only helplessly divert along the six yard line. Saucer-eyed with excitement at the prospect of a tap-in, Hungerford’s Alfy Whittingham rushed in at the back post only to fluff his lines, a wayward air kick spooning dirt into the air but leaving the Hamlet goal untouched.

Huddled deep, their two banks of pink shirts bobbling just in front of their own penalty area, Hamlet failed to assert themselves on the first-half proceedings. The team’s play consisted mostly of jerked reactions, scrappy rushed clearances up the field running harmlessly through to Hungerford goalkeeper Jacob Weaver. Starved of service up front, Dipo Akinyemi could do little more than provide a waspish presence, his intensity and fervour in working the channels unable to compensate for a team that until then lacked any offensive sting.

For much of the half it was like a snow-machine was pointed at the Hamlet goal, defenders Chambers and Magnus Okuonghae finding themselves pelted with a cascade of flying balls. After eight minutes, Hungerford’s strategy nearly bore fruit again. It was a case of déjà vu, another driven throw-in from Rusby finding Whittingham at the back post. His back hunched and his arms flailing, Whittingham could only shoot rather unconvincingly into the side netting.

The sound of the locals’ accents trying to pronounce the name of Hungerford’s new striker, Danilo Orsi-Dadomo, had been a source of well-mannered mirth for many Hamlet fans before the game. As Hamlet supporters launched into a verse of their famous “We’re the famous Dulwich Hamlet and we look like Tuscany” chant, however, it was the striker of Italian origin who was to prove their undoing.

A sloppy attempt by central defender Okuonghae to play the ball out the back was closed down by Orsi-Damano. From there the striker – released last month by East Thurrock – turned and hit a dipping shot from 25 yards. Back-pedalling, the otherwise excellent Preston Edwards could not stop the ball from looping over him and going in off the underside of the crossbar. In fairness to the Hamlet stopper, he was not helped by the sloping surface of the Bulpit Lane field, whose downhill gradient was stark for all to see.

Prior to half-time, the match descended into much of a muchness, a quarrelsome hoof and counter-hoof of one long ball after another. From a tight angle, Akinyemi did manage to force a regulation save from Weaver, but otherwise the only other moment of significance was the forced substitution of Hamlet winger Nyren Clunis. Manager Gavin Rose would confirm after the match that Clunis’ substitution was a precautionary measure. Clunis has been carrying a light strain in the right knee and will undergo a medical scan on Tuesday.

In the second half, Hungerford’s heavy-metal football replete with barked orders and relentless pressing seemed to run out of puff. Pressing higher and adopting a traditional 4-4-2, Hamlet gradually asserted themselves on the match. They did so, however, amid an atmosphere that was quickly souring on the pitch. A number of Hamlet players needed the attention of the physio early on in the second half, with the suggestion being that their Hungerford counterparts were being over-exuberant in their physicality.

This was interpreted by Hungerford as an exercise in kiddology, Hamlet trying to draw fouls in dangerous areas against a team known for its vulnerability in defending set-pieces. Frustrations boiling over, Hungerford midfielder Romone Rose could perhaps have considered himself fortunate not to be sent off when kicking out late at Hamlet forward Kingsley Eshun.

Both goals conceded by Hungerford in their previous league fixture at Slough Town had come from set-pieces. Despite bringing in Weaver on loan from Birmingham City in the week, it was again a set-piece that undid them. Nathan Ferguson, who pushed up into a more attacking role in the second period, was released by an excellent ball from left-back Nathan Green to win a corner. From there, Dominic Vose’s curled corner to the back post was met by Green. Green’s header ricocheted around the box like a manic version of pinball before finding its way back to the left-back, who nodded in at the second attempt.

The goal settled Hamlet, with the result that their football took on that stately kind of grandeur that is so common to them, midfielder Ashley Carew serving as the conductor of a slick, passing machine that began to crank into gear. Vose began to weave his way into dangerous positions on the left, while, having been switched to the right flank by manager Rose, Anthony Cook rocketed his way into the space behind the Hungerford defence.

It was another corner that was to provide the Hamlet winner. With Hamlet fans clutching inflatable pineapples and bananas behind the net, it was a goal whose comedy was worthy of its setting. Again a curled Vose ball in led to a slapstick contest of swatted rebounds worthy of air hockey, before forward Eshun poked it into the net.