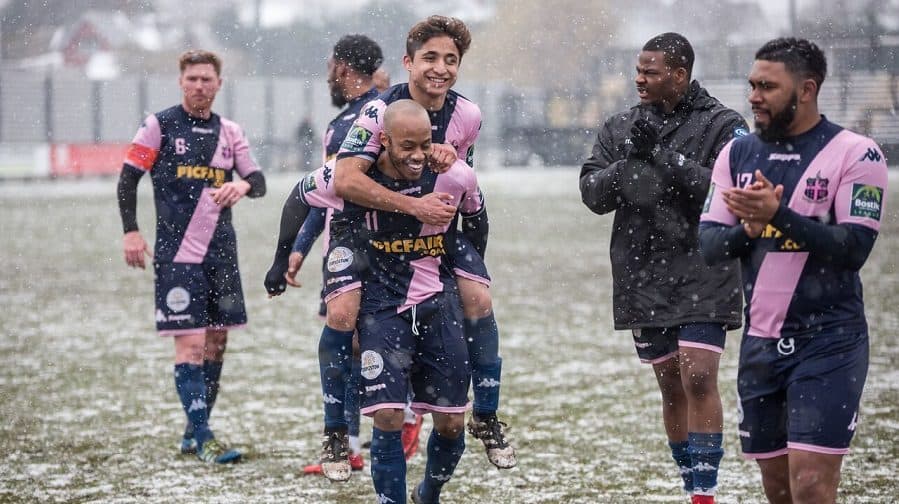 Dulwich Hamlet supporters braved the freezing conditions and the snow on Sunday to make their temporary home a fortress and send a defiant message that their spirit will not be broken.

There were 860 shivering fans at Tooting & Mitcham’s Imperial Fields, the majority of them in pink and black and they were rewarded as they watched their side romp to a 3-0 win over Worthing.

Hamlet were playing their first league game at the home generously offered to them by their Premier Division rivals after being served notice on their licence to play at Champion Hill by stadium owner Meadow.

Eight miles down the road from their own home of more than 125 years, Gavin Rose’s side defied the conditions and all the off-pitch troubles to move back to the top of the table.

His players showed their appreciation for their fans’ efforts after the final whistle. One supporter, Kevin Oakhill, 39, journeyed from St Alban’s, where he lives, for the game.

“I was living in south London until last year and caught the bug, and I’m still travelling to the games,” he explained. “We were flitting between non-league teams, doing the rounds of the grounds, and it is such a nice club to support. The atmosphere is fantastic, and I’ve been to more and more games each season, 25 this season.

“When you’re travelling 50 miles anyway then eight isn’t much of a problem. Obviously the situation is a nightmare for us and we’re genuinely grateful to Tooting for having us here. It’s not something they had to do.

“It’s not our home, Champion Hill is and that’s where we’re supposed to be. The support from Southwark Council has been fantastic. But one of the big problems now is that were this game at Champion Hill on a Saturday we’d probably have 1,800 people at it. Obviously that’s costing us quite a bit of money.

“There was a huge level of support for this club anyway, there is only one other club that gets these kinds of crowds at this level and that’s Hereford. This is a big club by these standards and it’s so important to the community.

“To start with there were three or four of us friends who went to games, now there are seven or eight. We don’t attract fans because we have big names like Jermaine Pennant and Jamie O’Hara, like Billericay have. They come because it’s such a nice club.”

Stuart Boyd, 38, from Surbiton, is also a Tottenham fan, but the ease of attending Hamlet games and the buzz around the club has meant he has become a regular.

“This is easier,” he said. “I love waking up in the morning and deciding if I want to go for a few drinks with my mates and watch a game. That’s what’s so beautiful about not just Dulwich, but any non-league club. It’s hassle-free and at Dulwich in particular there is a wonderful atmosphere.

“If you go to Champion Hill on Saturdays you tend to see a lot of families as well. People just want to go and enjoy it.”

Such is the interest in the saga, there were TV crews from NBC and Al Jazeera at Imperial Fields at the weekend.

Hamlet club scout Richard Lewis was doubling up as a steward on Sunday, and he had also attended a rally organised by supporters in Dulwich the previous day.

“Football has been my life for 40 years and it was a hell of a shock to be told that my football on a Tuesday and a Saturday might be coming to an end after all the hard voluntary work I’ve put into it over the years,” he said.

“The supporters have been absolutely fantastic. Seeing the railings around the ground, it really does hit you.”

Spirits were lifted by a superb display from Hamlet. Sanchez Ming fired them in front five minutes before the break, and second-half goals from Dipo Akinyemi and Nyren Clunis (right) moved them two points ahead of Billericay and Folkestone in the table.

Rose was never going to use the excuse of playing in unfamiliar surroundings even if they hadn’t got the result.

“The players are local to Tooting anyway so that’s not too much of a drama,” Rose said. “Obviously the players will take a few games to get used to it but I don’t think it’s as big an obstacle as some have made out.

“We’ve just got to concentrate on getting out onto the pitch and nothing changes then, same ball, two goals at either end.

“It can be distracting, but my job is what happens out on the pitch. If we don’t perform then everyone looks at me. I just make sure I’m doing my job. Of course I’m aware of everything because it affects me and it affects the players. But when I’m here on a match-day it’s where I want to be and I’m focused on doing my job.”

Billericay have five games in hand and are favourites to clinch the title, while Folkestone are also in the mix.

“We’ve played Folkstone once and they are a really good team, we have a lot of respect for them,” Rose continued. “If Billericay win their games in hand then they are in the ascendancy. They’ve shown they are fallible, they have lost games in the last month and that probably gives their opponents more confidence that they are not invincible.

“There are not a lot of games left and there is still a lot to play for. It makes it fun.”

Club director Tom Cullen paid tribute to the players for the way they have maintained their promotion challenge despite the uncertainty over the club’s future.

He said: “It’s been an amazing response from the team after everything that has been thrown at us. We had a bit of a dip recently but if anything this has spurred them on. They defeated Billericay, have come here and won.

“We couldn’t have asked for a better response from the players and you can tell they really, really care about the club. They are so dedicated, which is quite rare in football.”