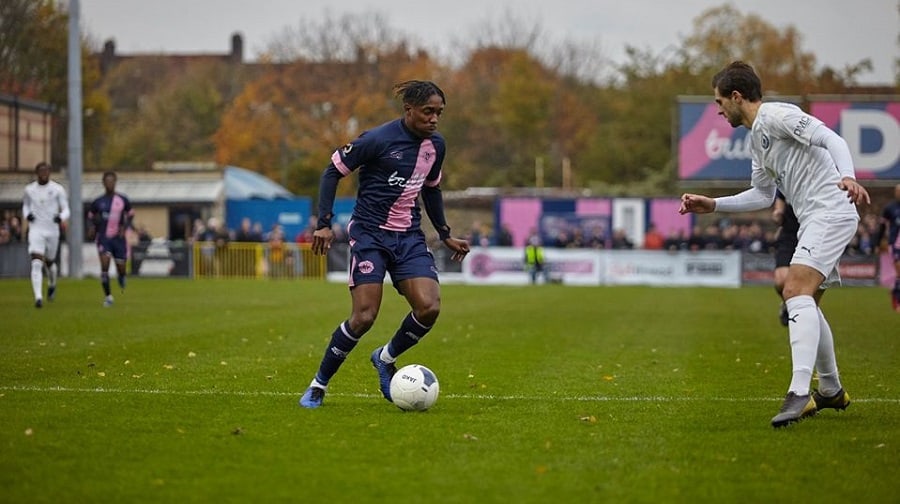 Dulwich Hamlet still can’t get that elusive first league win since August and this time it was a controversial penalty awarded fifteen minutes from time that denied them against Dartford at Champion Hill last weekend.

With Gavin Rose’s side leading 1-0, Christian Smith seemed to win the ball only for a spot-kick to be awarded and Elliott Romain fired home from twelve yards to leave the majority of the 2,365 crowd disappointed.

Smith had given the hosts the lead in the 48th minute and they looked set to see the game out before the visitors grabbed that fortunate equaliser.

Dulwich started brightly with Nyren Clunis going close to opening the scoring in the eighth minute but his effort from the left went just wide.

Darren McQueen was the biggest threat for the Darts and he created space for Liam Gordon to cross for Luke Wanadio in the 21st minute but Preston Edwards saved bravely at his feet and Dulwich cleared.

Dartford’s Mark Smith then almost gifted the home side the lead when he fumbled Lionel Ainsworth’s effort, but the goalkeeper reacted to stop the ball from rolling over the line.

Ainsworth tested Smith again with a fierce drive after Danny Mills and Ben Dempsey had combined and Mills then had the chance to put Ainsworth through but didn’t measure his pass well enough and the midfielder was forced wide with the chance gone.

It was mostly Dulwich and David Ijaha had an opportunity but saw his shot blocked and Mills couldn’t take advantage of the loose ball.

Romain had the last chance of the first half but after going past Smith he shot wide.

Dartford pressed for an opener immediately after the break and put the hosts under pressure, before Dulwich countered and took the lead.

David Ijaha broke forward before he was fouled on the edge of the area by a scrambling defence. From the resulting free kick, Smith fired his shot through the wall to give his side the lead.

Dartford responded through the livewire McQueen who should have equalised, before Quade Taylor missed a gilt-edged chance with a header.

It was end to end and Ainsworth had to be defensively alert to deny McQueen from Tyrique Hyde’s cross.

The Kent side were then left wondering how they weren’t level when they struck both posts before Taylor cleared off the line.

But their – and Dulwich’s – luck turned in the 75th minute when Smith was harshly penalised for an apparent foul on Romain. The striker gave Edwards no chance from the spot.

It was then the Hamlet’s turn to be denied by the woodwork in the 86th minute when Ainsworth found Nathan Smith with a sweeping pass and the defender’s effort beat Smith but bounced back off the far post.

The result moved Dulwich up a place to eighteenth in National League South, but they are just two points above Hungerford in the last relegation spot.

Dulwich are in FA Trophy first-round action when they travel to Hornchurch this Saturday for a 3pm kick-off.

They return to league action the following Tuesday night when they host Havant & Waterlooville.