Dulwich Hamlet made hard work of it at times but secured three points against struggling Bury Town. 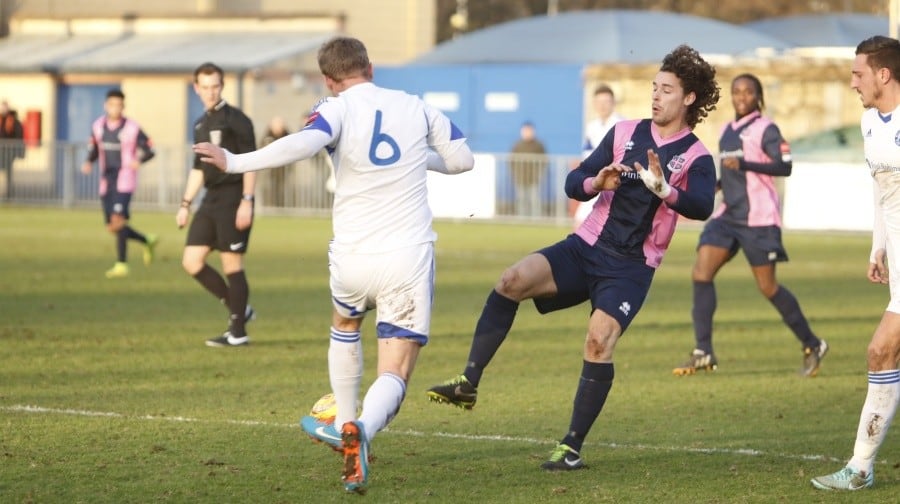 Goalscorer Harry Ottaway in action at the weekend.

Hamlet condemned basement side Bury Town to another defeat but promotion chasing Dulwich toiled their way to three points at Rams Meadow at the weekend.

The Suffolk side are well adrift in bottom spot of the Ryman Premier League but they belied that with a battling display, but ultimately Hamlet had too much quality for them.

A listless first period was broken up by two key incidents. Michael Kamara was adjudged to have been fouled on 20 minutes, just before he hauled back Bury’s Joe Benjamin when clean through.

The generous decision went the way of the visitors although many thought Kamara was lucky not to see red, to rub salt in Bury wounds the goal Benjamin netted after the incident was also chalked off.

Play was also disrupted for ten minutes whilst a replacement linesman needed to be found for an ill official, something that did little to help the flow of the game.

Aside from a few half chances for Harry Ottaway the game looked like being goalless at the break until Serge Makofo put the visitors ahead with a neat volley on the turn, after getting on the end of an Ottaway flick on.

If there was a touch of injustice about the scoreline the home side got the break they needed seven minutes into the second half.

A goalmouth scramble following a corner saw Hamlet appear to score their second goal only for it to be chalked off for a dubious foul.

Almost instantly Bury went up the other end and equalised when Remi Garrett got the better of Phil Wilson with a neat drive.

Town now had the momentum and it looked like Hamlet would be coming away from Suffolk with a disappointing result.

But two goals in the final fifteen minutes swung the game the Pink and Blues way.

A stray pass left the keeper and the Hamlet forward in a footrace to reach a ball waiting to be hit home, and Ottaway got to the ball first to restore Dulwich’s lead.

The game was killed off nine minutes later when the ball pin balled around the area following a corner, only for Ethan Pinnock to nudge it home with a finish on the turn from near the penalty spot.

Hamlet were in league action on Wednesday night away against Lewes, a game that took place after the News went to press.

To find out that result, and to get the latest Hamlet news, visit www.pitchero.com/clubs/dulwichhamlet.