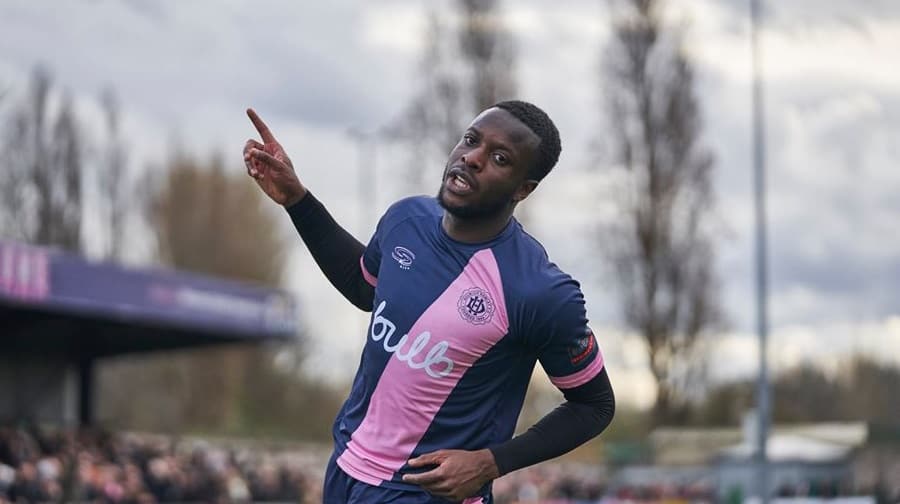 Dulwich Hamlet’s comeback against Hemel Hempstead on Saturday might well have saved their National League South status, as Champion Hill hosted football for perhaps the last time in months.

Aaron Barnes’ 82nd-minute winner, which followed a Lionel Ainsworth equaliser, ensured that the Hamlet enter the seemingly inevitable Coronavirus-induced break outside the league’s relegation zone, but for twelve minutes their score-line and those elsewhere had them in 21st place.

Dulwich began well, as Diogo Barbosa shot just over from the edge of the box in the second minute, but were then largely outplayed during a first half which saw the Hertfordshire visitors threaten a number of times. Then in first-half stoppage-time, winger Dobson’s long throw fell to Theo Widdrington via pinball in the six-yard box, but he could only stab a toe-ended effort into the Grainger’s grateful gloves.

Despite the obvious Coronavirus fears, Dulwich Hamlet were delighted to welcome another impressive crowd of 2,376 spectators, with supporters of Premier League and EFL clubs – Millwall for one – recognising that SE22 was likely staging some of the last football for the foreseeable future.

But in the 54th minute, the Hamlet’s divisional future was plunged into extreme doubt, when Richard Orlu’s awful headed clearance fell to Hemel captain Connor Essam. Grainger was equal again to the centre-half’s strike, but Tudors number nine Aaron Jarvis poked home for 1-0.

Dulwich Hamlet, due to St Albans City’s 1-0 lead and eventual victory away to Braintree Town, at that moment found themselves in the bottom two for the first time this season. Amid uncertainty as to how the National League might decide on final standings, the predicament could have left them facing a return to the Isthmian League.

Gavin Rose, who is contracted to the club for another two seasons, was however relieved to see left-back Nathan Smith’s low cross reach Ainsworth at the back post, a chance dispatched in the 66th minute by the ex-Motherwell attacker as he fired into the bottom left corner.

The goal was the first Hemel had conceded in five games.

With the team and supporters now newly energised, Ainsworth nearly turned provider soon after, delivering a great corner onto the head on Kuagica David – a home-debuting defender who has represented Angola eight times internationally – but his effort was headed off the line.

With ten minutes to play, lone striker for the match, Dylan Kearney, almost scored a goal-of-the-season contender, as 35 yards out he controlled and swivelled from a kick up-field in one motion, before sending a half-volley towards the top corner, not missing by much. Hemel’s Tosan Popo responded immediately by blazing narrowly wide of Grainger’s top left corner, but when Dulwich substitute Barnes took possession of the ball in the midst of a goalmouth scramble, the two-footed full-back shot low into the net in front of an ecstatic and adoring Rabble.

Rose’s side hung on, surviving a 94th-minute free-kick right on the edge of their eighteen-yard box, to claim an indispensable three points. Hemel Hempstead manager Sammy Moore was also red-carded at full-time by referee Joel Mannix for remonstrations with match officials. National League clubs now await news as to whether or not the Covid-19 pandemic will see the season continued, suspended or cancelled.

On its website yesterday, it said: “The National League is keeping the continuation of the season under constant review and will provide a further update in due course”.