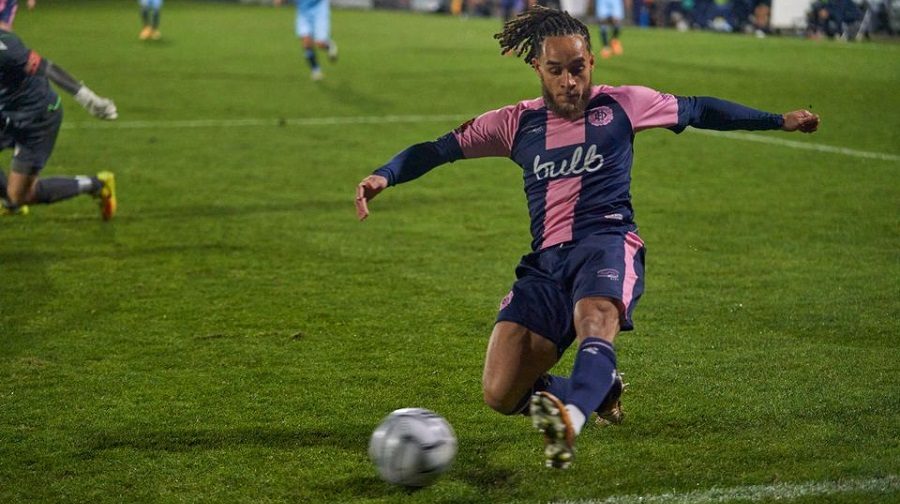 Dulwich Hamlet’s FA Trophy campaign was ended by Hornchurch on Saturday, as the hosts blew a lead to suffer a 2-1 third-round defeat at Champion Hill.

Swirling rain distorted the second half of a match which had been one of impressive quality in the opening 45 minutes – the deteriorating conditions seeming to coincide with news from Number 10 Downing Street that London would move into the shiny new Tier 4.

Hornchurch made the brighter start, going close in the fourth minute through Ollie Muldoon, whose eighteen-yard piledriver was pushed firmly to safety by in-form Dulwich goalkeeper Charlie Grainger.

Former Millwall graduate Jesse Debrah could have had a couple in the first half – Jordan Higg’s lofted free-kick found the young centre-half, who spun sixteen yards from goal but could only drill his shot straight into the gloves of Joe Wright.

But the Hamlet did strike first after sixteen minutes, when full-back turned left-winger Aaron Barnes opened up his body from the corner of the box and shot into the arm of Joe Ramsey – the spot kick was converted into the left-corner at mid-height by Sanchez Ming.

The second of Debrah’s efforts was closer. Quade Taylor used his body well and laid off to Debrah who struck narrowly over just inside the box, but that was after right-back Ming somewhat turned villain in the 26th minute, conceding a penalty which former East Thurrock striker Sam Higgins dispatched into the bottom left corner.

The wind and rain made a brief appearance in the first period, as Dulwich began to surrender more and more chances to the visitors – the best of which was a gift from Grainger, whose pass out to Michael Timlin was intercepted by forward Charlie Ruff, but his shot was blocked in what was the final action of the half.

A positive from the season so far for the Hamlet has been the return to fitness of Reise Allassani, who played just behind strikers Danny Mills and Deon Moore to form a dangerous MMA front-three – Allassani was chopped down from behind by Hornchurch midfielder Joe Christou in the 55th minute, much to Dulwich boss Gavin Rose’s displeasure.

With the match of course behind closed doors, Rose could be heard saying ‘what was that?’ to the fourth official. Allassani quickly got up, but proceedings stopped for five minutes soon after when Hornchurch’s Charlie Nash was stretchered off having come out worse from a very audible collision. 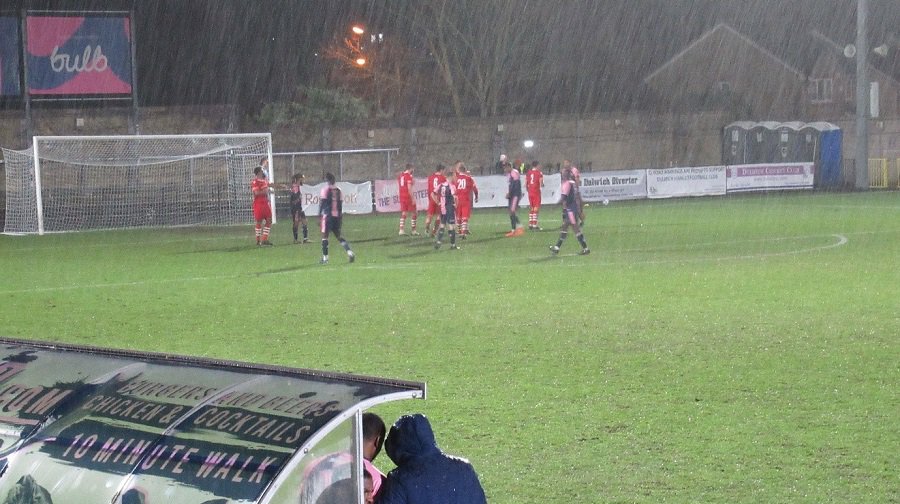 It wasn’t until the 85th minute that conditions became extreme, as the floodlights emphasised the directionless downpour – one minute later, Ruff squeezed a close-range effort under the body of Grainger for the Isthmian League team’s winner.

Dulwich Hamlet went in search of a late response, but Hornchurch skipper Rickie Hayles, a centre-half once of the Hamlet, blocked Allassani’s shot inches from the goal line.