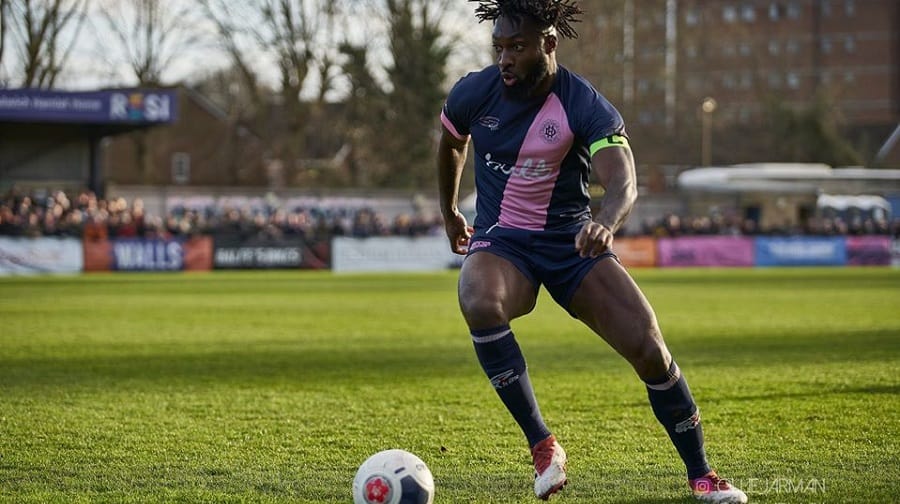 By Kit Heren at Champion Hill

Dulwich Hamlet suffered a home defeat against south London rivals Welling United on Saturday, on an afternoon when the wind and rain threatened to overshadow the action.

The Hamlet went into the game a single point and two league places ahead of the Wings, but the game was decided by the teams’ approach to handling Storm Dennis, which swept across London at the weekend.

The visitors to Champion Hill scored the only goal through Romney Crichlow-Noble in the eighth minute.

Welling started better, creating the best chances in the first half by playing the ball along the surface, working through midfield and drawing fouls from their hosts.

This approach soon paid dividends, when Crichlow-Noble poked home from close range. A free-kick by Anthony Cook into the Hamlet box caused panic among the home defence. Crichlow-Noble’s first shot was blocked, but he was given time and space to bury the follow-up.

Welling continued their slick passing game, playing in forwards Dipo Akinyemi and Bradley Goldberg on several occasions. Goldberg had a penalty claim waved away after going down in the box.

By contrast, the home side struggled with the wind in the first half, sending a series of long aerial balls upfield, most of which were claimed with ease by Welling goalkeeper Dan Wilks or headed away by the defence. The Champion Hill faithful groaned in disappointment as pass after pass missed its target, caught in the wind or skidding off the surface.

But Dulwich didn’t let their heads drop, and their best chances of the first half came right at the end. Captain David Ijaha won the ball in midfield and spread it wide to Jeffrey Monakana whose cross into the area was headed down towards the corner by Quade Taylor – back in the side this week – only to be parried spectacularly by Wilks.

Minutes later, Wilks came to the Wings’ rescue again, pushing away Danny Mills’ powerful header to keep the away side in front.

The second half was much more open, with the Hamlet pushing hard for an equaliser. On 70 minutes, Monakana crossed from the right to the substitute Shamir Mullings, who was lurking at the back post, but the striker’s header was straight at the grateful Wilks. Shortly afterwards, Mills used his powerful frame to hold off the defence and turn on the edge of the area, but he dragged his shot wide.

Welling continued to look dangerous on the break. Former Dulwich striker Akinyemi almost got on the end of a couple of balls through the defence, while Goldberg drew a smart save from Charlie Grainger with a whipped shot from just outside the area.

With ten minutes left, Diaz Wright was played in behind the Hamlet defence following a clever exchange, but he lifted his shot over the bar.

As the game drew to a close under the floodlights and the Hamlet pushed hard for equaliser, tempers flared and players from both sides tussled.

The game ended 1-0 to Welling – a fair result and valuable to the Wings given their proximity to the bottom of the table – although Gavin Rose’s side will rue a string of missed chances by their forward line.

The result leaves Dulwich five points above the bottom two in National League South, ahead of their trip to fifth-place Bath City next Saturday.

Lionel Ainsworth was not in the squad for the game, but reflected: “The conditions, both teams had to play in them, we had a few chances, but I think their keeper has played really well, kept them in the game. It’s just one of those things.

“The boys still stood strong. They [Welling] had a couple of chances as well, but we had more than enough chances to go and win the game.”