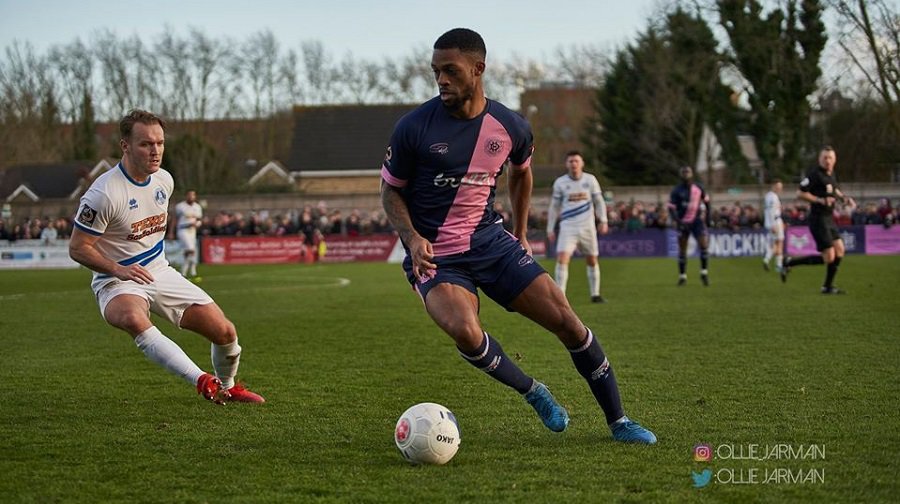 The Hamlet had chances to take the lead. Photo: Ollie Jarman

Dulwich Hamlet picked up an impressive point and clean sheet away from home last weekend as they dented Havant & Waterlooville’s title hopes.

It was a third clean sheet this year, with on-loan Millwall centre-back Jesse Debrah again impressing in defence.

Havant had to play for 50 minutes with ten men.

The Hamlet had the chance to take the lead in the sixth minute when Danny Mills reached Jeffrey Monakana’s cross but could only head into the side-netting.

The visitors looked dangerous and when Kieron Monlouis picked up a loose ball in midfield he drove forward and forced Craig Robson into a tackle that earned a booking.

Havant goalkeeper Ross Worner palmed away Monlouis’ fierce effort from 25 yards and then Dulwich thought they should have had a penalty when Monakana’s effort hit a hand in the box, but the referee waved play on.

Gavin Rose’s side continued to play with confidence and Mills was next to go close as he got in on Worner’s goal but his shot bounced off a poor pitch and away from the target.

Benny Read threatened for the hosts but Aaron Barnes was there to block, before the Hamlet had another opportunity in the 32nd minute. Barnes found Monlouis whose drive was tipped over by Worner. From the corner the ball fell to Joe Bedford and this time it was Robson who saved his side by heading away.

Havant were reduced to ten men four minutes before the break when Mills was through on goal on the edge of the box but was taken down by Simon Walton, who was shown a straight red card. Smith tested Worner from the free-kick but the goalkeeper showed safe hands.

The hosts showed more attacking purpose immediately after the break and Debrah did well to prevent Ayunga opening the scoring in the 47th minute, before the latter missed an even better chance moments later when he skied over from twelve yards after Danny Kedwell had set him up.

The title-chasers then wondered how they didn’t take the lead just after the hour. It came from Grainger’s save to deny Ayunga before the ball landed at Robson’s feet two yards out in front of an open goal, but the defender somehow shot wide of the target.

Dulwich were struggling to match their first-half display, summed up in the 72nd minute when Mills and Monakana both left the ball to each other from Nyren Clunis’ cross and the chance was gone.

Bedford shot straight at Worner with seven minutes left before Debrah again covered to thwart Ayunga with the clock running down.

In added-time, Ben Chapman saw his effort go just wide before the game’s most controversial moment when the referee deemed that Mills had committed a foul no one else seemed to see just as Clunis was going through.

The result leaves the Hamlet fourteenth in the table ahead of their game against Welling at Champion Hill this Saturday. Kick-off is 3pm.