Gavin Rose's side went out in the second qualifying round 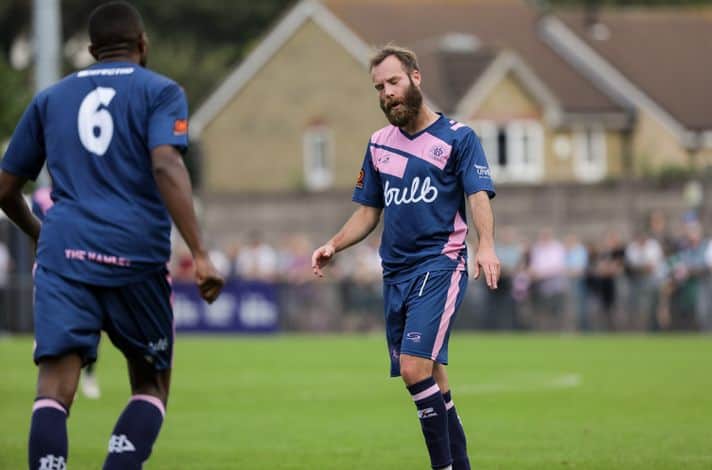 The Hamlet were frustrated by Bedfont. Photo: Liam Asman

Dulwich Hamlet were shocked by Bedfont Sports in the second round qualifying of the FA Cup last weekend.

Joe Jackson scored the only goal of the game to send Bedfont into the next round.

It was ominous early on for the Hamlet who despite starting their National League South campaign positively struggled to break down their opponents from the Isthmian League South Central Division, two tiers below.

Darren McQueen started brightly and threatened in the nineteenth minute but it was the visitors who went ahead after half an hour through Jackson.

A minute later Andrew Harris-Sealy fired an effort on goal and Danny Mills couldn’t find the net from the rebound.

Mills did have the ball in the net eleven minutes into the second half but it didn’t count and even with plenty of time left most of the 1,605 inside Champion Hill were beginning to suspect it wasn’t going to be their day.

Hamlet boss Gavin Rose sent on Chike Kandi for Harris-Sealy in the 69th minute as the hosts tried to find a different route through a crowded and ruggedly determined away defence.

There was another throw of the dice with ten minutes remaining when Jack Holland replaced Deon Moore but Bedfont edged closer to a historic result.

Mills had a glorious opportunity to level in the 81st minute but somehow sent his effort the wrong side of the post.

Jaydn Mundle-Smith was Rose’s final change when he came on for winger James Dayton, but the away side refused to crack and claimed a deserved win.

The visitors were elated but took time to pay tribute to their hosts on Twitter. They posted: “I must say without any doubt the welcome we received at Dulwich Hamlet was the best since we joined the non-league pyramid.

“Great people, great support and just a wonderful atmosphere. Thank you from everyone at Bedfont Sports.”

Little consolation for the Hamlet as Bedfont moved to within two wins of the first round proper. They have been drawn against Southampton side Sholing of the Wessex League Premier Division in the third qualifying round.

Dulwich’s focus is back on league action this Saturday when they travel to Chelmsford City. Kick-off is 3pm.