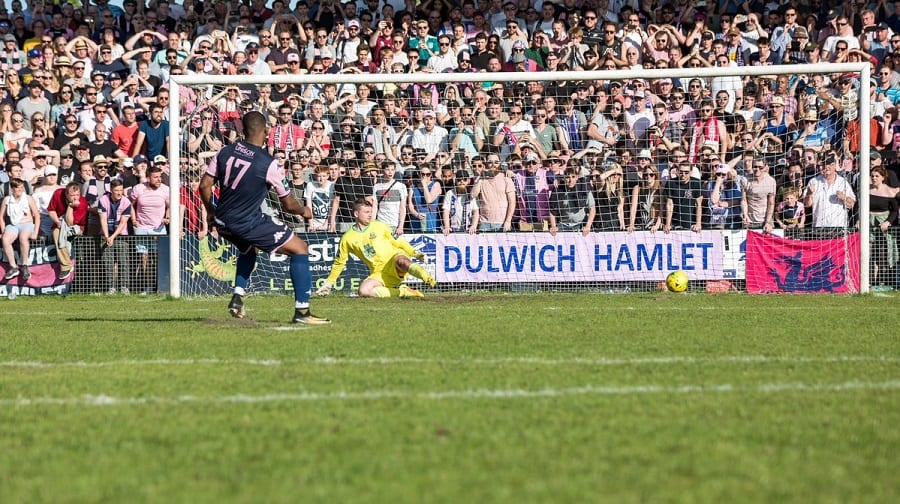 It would be decided in a split-second, but if Dipo Akinyemi was feeling the weight of history he didn’t show it.

The number 17 strolled forward from the centre circle looking like the coolest person there on a swelteringly hot afternoon at Tooting & Mitcham’s Imperial Fields.

Akinyemi placed the ball, took a few paces back and a deep breath, then had the composure to wait for Hendon goalkeeper Tom Lovelock to move before finding the bottom corner.

It was almost 30 degrees as supporters mobbed the players, but the some of the seeds for this win were sown in a blizzard in March.

After the locks went on the gates at their Champion Hill home, Gavin Rose’s side played their first league game at Imperial Fields on Sunday, March 18, having been forced to look for an alternative stage for their promotion bid.

The day before, fans had organised a walk from Goose Green roundabout to Champion Hill to rally support in the wake of Meadow, who own the ground, evicting them, another element of a dispute with Southwark Council with the club stuck in the middle.

Hamlet led the Isthmian League Premier Division for a large chunk of the season, but Billericay, with a wage bill that dwarfed the Dulwich club’s, won enough of their games in hand to pip them to the title.

That meant a fourth successive play-off campaign, and they just edged Leiston 1-0 in the semi-final last Thursday night.

They could have been carrying some psychological baggage after losing in the final 2-1 to Bognor Regis Town in 2017 and to East Thurrock 3-1 the year before.

Tickets quickly sold out for their latest attempt, 3,321 flocking eight miles south of Champion Hill. That broke the record at this ground, set when Tooting & Mitcham played the recently formed AFC Wimbledon in an Isthmian League First Division clash in 2005.

In recent years Hamlet have grown their fanbase through creative means – not least on social media, especially Twitter where they have gained 5,000 new followers in the last three months – and they have promoted causes such as International Women’s Day by wearing an all-purple kit.

This was also a reminder of the joys of non-league football. It’s traditional at this level that fans behind both goals change ends at half-time, hoping to “suck” the ball into the net. That quick swap was no small feat given the size of the crowd last Monday. There was also a thirst-quenching detour across the road to the BP station, where the queue for refreshments was out the door and past the petrol pumps.

At that point Hamlet were behind to Ashley Nathaniel-George’s 36th-minute strike, which trickled through the grasp of goalkeeper Amadou Tangara.

Tangara was taunted with chants of “dodgy keeper” from Hendon fans for most of the rest of the game. But he saved brilliantly from Niko Muir to prevent his side falling further behind.

Rose reminded his players at the break that they had been the better side, but when they couldn’t force the ball in after several goalmouth scrambles it appeared, yet again, it wasn’t going to be their day.

In the 54th minute, in front of their fans, Hamlet finally levelled when Gavin Tomlin prodded in after Hendon twice cleared off the line.

Hamlet’s Nyren Clunis smashed a shot off the crossbar soon after but that was the closest either side came as the pace understandably dropped and in the stands sunscreen was being more vigorously rubbed into sunburnt skin.

Rose said they had some “luck” in that the coin toss decided the shootout would be in front of the “home” fans, who had shown remarkable stamina chanting to their drumbeat for the entire second half and through extra-time.

Tangara then sprung down low to keep out Oliver Sprague’s effort and Nathan Green put his side 2-1 up.

Nathan Ferguson couldn’t extend their lead, Daniel Uchechi and Muir scored for Hendon, while in between Anthony Acheampong held his nerve to preserve the slim advantage.

It all fell to substitute Akinyemi, who calmly rolled in to spark such joyous scenes.

“It’s a great feeling. We’ve gone so close in recent years, we’ve had some great servants along the way. This victory is for them as well,” Rose, wiping pouring sweat from his face and straining to make himself heard outside a jubilant dressing room, told the News afterwards.

“I always felt that even when we lost the goal we had something in us to get back in it. Maybe luck was on our side.

“In the end it goes to penalties and you know that anyone can win. Luck was on our side when maybe in previous years it hadn’t been. That’s football for you.

“I told the players at half-time to remember we were the team on top and if we could keep doing what we were doing we would get back in the game.

“It’s important not to panic, believe in each other and that’s what they did.

“We’ve got players who’ve been on a long journey with us over a long period of time, they know what it takes. They’ve also felt how bad it feels to lose. They’ve shown now how much it means to them to win.

“It definitely came up [about the previous defeats] but we wanted to focus more on what we had to do and that’s what we did.”

Rose will now spend the summer planning for National League South, but whether that campaign is at Champion Hill remains to be seen.

“I haven’t got a clue,” Rose said. “What I do know is we have to think about players for the league above. A lot of them can play for us in the league above, but it depends on what position the club are in financially.

“It won’t do us any harm playing in that league with the squad we have at the moment. We’ll see how it goes.”

At Goose Green on Monday, thoughts of the future were forgotten as celebrations continued long into the night.