Ralph Morris played for Dulwich Hamlet in the 1940s and 1950s 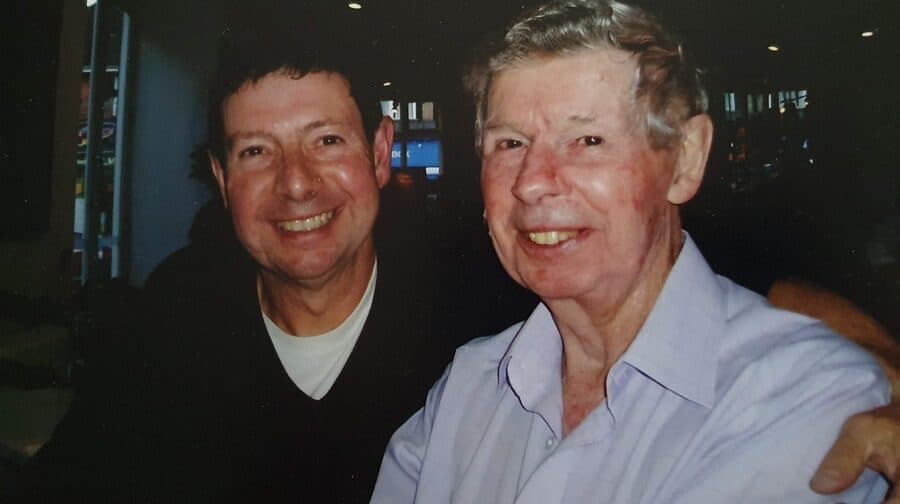 A Dulwich Hamlet supporter is walking 262 kilometres in memory of his father, a former player at the club, who passed away last year.

Andrew Morris is currently walking the Camino de Santiago pilgrim route from the Portuguese city of Porto to Santiago de Compostela in Spain. He set off on Saturday, September 26 and aims to complete the Odyssean trek by Wednesday, October 7.

The travel writer from London hopes to raise £15,000 that will go to Dulwich Hamlet’s new charity – The Kail Foundation, to support youth coaching and the creation of a walking football team for seniors.

His father, Ralph Morris, played for the Hamlet in the late 1940s and early 1950s, and was tipped in newspaper reports from the time to play for England amateurs, but he had his career cut short aged 25 by injury. Aside from football and family, Ralph’s other passion was travel, so Andrew felt the famous trek would be an apt way to remember his father’s life and leave the club with a legacy from him.

Ralph was born in 1928 and grew up in a working class household in the East End of London. His love of football was evident from an early age. He would dribble a tennis ball down the road to buy ten shillings’ worth of meat from the butchers for his family’s Sunday roasts.

As with many from that generation, his life was indelibly shaped by the Second World War, although for Ralph it seemed to have a positive impact. Upon turning 18 in 1942 he joined the RAF and was shipped off to Malaya. He remembered seeing dolphins chasing the ship as he slept under the stars on deck, and snake-charmers lining the banks of the Suez Canal. A rather special sight for a young lad from the East End.

Ralph’s wife, Eve, said he spent most of his military service playing football for the RAF’s team across the Malay Peninsula and had a glorious time.

On returning to the UK, Ralph broke into the Dulwich Hamlet first team in the 1949-50 season, aged 21. He played at right-back for over 100 games and once scored from his own half. Ralph used to say in those days when an opponent was fouled you helped him up and said “sorry, old boy”. Ralph and Eve on their wedding day

In the autumn of 1951, Ralph saw Eve for the first time across the crowded dance floor at Beckenham Baths, and they were married a couple of years later in a ceremony conducted by his full-back partner at Dulwich Hamlet. While the happy couple ventured off on their honeymoon, the minister played for the Hamlet that afternoon.

Much to Ralph’s despair, his knees gave way in the 1953-54 season and he was forced into an early retirement. He was not one to wallow in his misery, though, and instead he followed the taste for adventure he had picked up in Malaya.

Andrew and Eve recounted exotic family holidays and unlikely business ventures. Perhaps the most amusing was Ralph’s decision in the late-60s to buy a 26-bedroom hotel near Margate, that only contained two bathrooms. “It was alright”, explained Eve, “most of our guests were from the North East and they would just come and get leathered on Newcastle Brown…people from the North East back then didn’t want en-suites – it was a bath a week!”, she chuckled.

Andrew said Ralph’s later years were somewhat blighted by poor health. But, his son insisted, he was religious in keeping up to date with the Dulwich Hamlet and Milwall results. Last year, as a ‘bucket-list’ activity, Dulwich Hamlet and Ralph’s care home organised for him to be the mascot at one of their home games in October. Sadly, the final whistle came for Ralph on September 16, 2019 – too soon for him to appear one last time at Champion Hill. But Eve and Andrew recalled how well they were treated by the club, and how proud Ralph would have been to see his grandson lead the teams out in his stead.

Now Andrew is walking in aid of Dulwich’s new charity in order to give something back to the club. 262 kilometres by foot is no mean feat, and Andrew admitted he was a little nervous, but said he’d have some help from “up there” – pointing towards the heavens.

“Ralph was a very special man”, said Eve, “although perhaps I’m a little biased…we had a lovely 66 years of marriage.”

Andrew would like to remember his father as that dashing young football player, slurping fresh coconut milk on the beach in Malaya, scoring from the Champion Hill half-way line, and meeting the love of his life on the dance floor at Beckenham Baths, that happy Saturday night in 1951.

People can donate to Andrew Morris’ walk by following this link: https://chuffed.org/project/walking-the-portuguese-coastal-camino-in-memory-of-ralph-morris#/story.