The Brick Brewery in Peckham hosts the photography exhibition 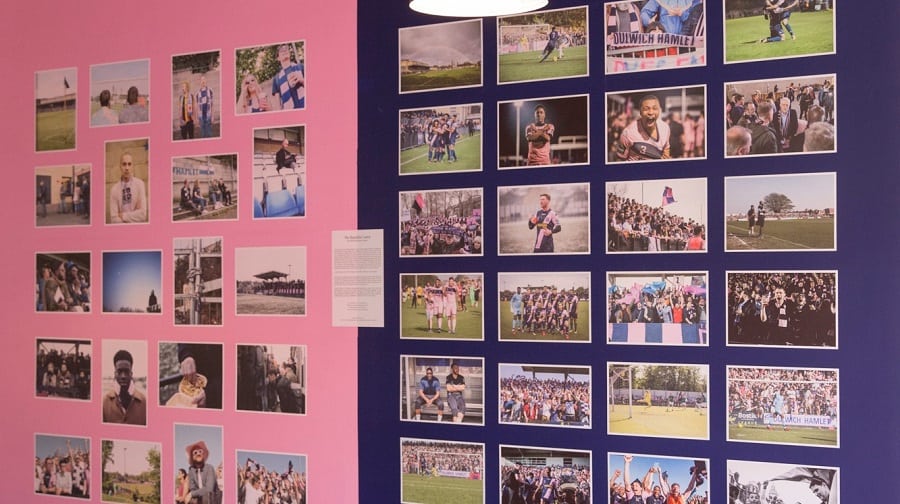 THIS SUMMER, Duncan Palmer and fellow freelance photographer, Sam Mellish, created an exhibition called The Beautiful Game at the Brick Brewery in Peckham in celebration of Dulwich Hamlet’s success last season, when the club won promotion to the National League South for the first time.

Dulwich Hamlet’s stadium problems have been well-documented in recent times. However, the impact on its supporters and the local community are given attention less often.

In the second half of last season, Dulwich were locked out of their Champion Hill ground by their landlords, Meadow Residential, in a dispute which involves Southwark Council. But from their temporary home in Mitcham, Gavin Rose’s side won promotion to the sixth tier of English football for the first time in their history.

But the move eight miles south to Tooting & Mitcham Football Club has had knock-on effects, particularly for Dulwich businesses.

Duncan, who is Hamlet’s official photographer,  wanted to choose a home for the exhibition that symbolised what the club has lost by being uprooted.

He explained the decision to have it at The Brick Brewery. “It was significant because it was a place where Dulwich fans always went before and after games. They used to give discounts to anyone wearing a pink and blue shirt.” Duncan, right, and Sam at their exhibition.

The exhibition was conceived to keep people reminded of the Hamlet. In doing so Duncan hopes to encourage fans to continue making the journey to Mitcham, to keep fighting to come home, and to help local businesses like the Brewery.

“The hassle of bringing kids on long journeys across multiple forms of public transport means that supporters with young families are less likely to come,” he added

“It used to be the case that everyone made the short walk to the same pubs and restaurants after the game. Now, people need to hurry home owing to the extra distance and no longer have a regular local meeting place. Things just aren’t the same at Imperial Fields.”

Long-term fan, Mishi Morath, echoes those concerns. “Local pubs don’t have the numbers they used to on home days, when all of the local boozers – from the Cherry Tree, up to the East Dulwich Tavern and The Bishop on Lordship Lane – were packed to the rafters pre- and post-match with supporters bedecked in pink and blue.

“After heading to the aforementioned pubs, the Hamlet faithful then needed some decent food to soak up their beers. The Dulwich Hamlet Fish Bar at the bottom of Dog Kennel Hill must lament ‘the good old days’ when there were queues out of the door after a game as fans eagerly awaited their Saturday evening supper of traditional fish and chips.” Mishi also pointed out that the Champion Hill stadium attracted tourist football fans. “The Hamlet have a close friendship with Altona 93, who play in the fifth division in Germany, and were visited by Dulwich in July. Whenever they visit London, their fans can be seen in the various watering holes of East Dulwich and beyond, as their supporters always ensure to stop-off at Champion Hill. The ground is as important to them as sights like Trafalgar Square and the London Eye.

“Last season alone, even if we discount the Altona connection, fans from Finland, Holland, France, Scotland, Wales, Estonia and Belgium were spotted on the Champion Hill terraces, such is the fine reputation of Dulwich Hamlet Football Club”.

Even if tourist numbers connected to the club are relatively small, their potential loss is yet another damaging facet of the saga.

However, Dulwich supporters are not accepting their fate. Last year, the club’s case was heard in parliament, and the rally at Goose Green attracted national attention.

Duncan and Sam’s exhibition was recently extended until September 12 and is an excellent visit for anyone who wants to to re-live Hamlet’s glorious promotion season.