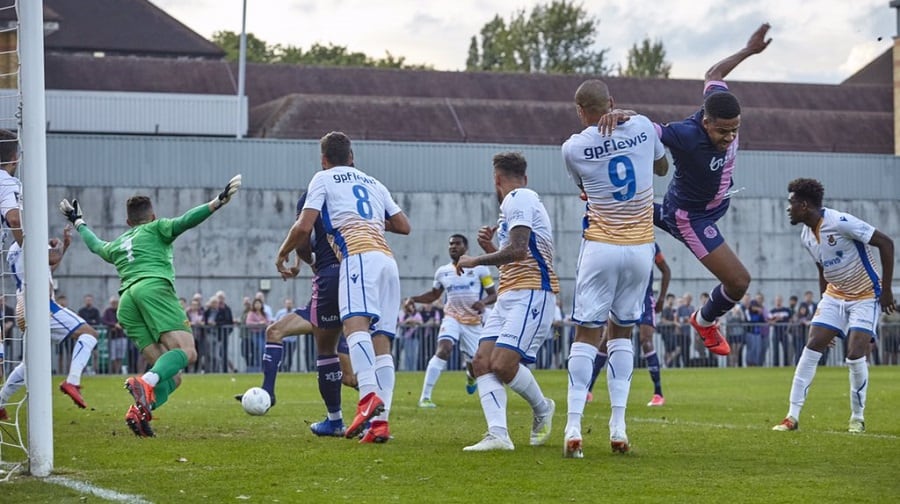 A familiar face will be on camera duty at Dulwich Hamlet for the foreseeable future.

Local fan Ollie Jarman has taken on official club photography responsibilities after Duncan Palmer stepped down from the role at the end of last season.

The east Dulwich resident told the News that accepting the role was an easy choice, and he spoke about his hopes for the future.

Ollie grew up in Devon and moved to London after completing degrees in photography at Exeter and Farnham Universities. He lived with his cousin, Jules, on Dog Kennel Hill. One day, Ollie recalls, Jules asked: “Do you fancy going along to see this local football club, then?” “I went along with him and never looked back,” Ollie said.

Ollie is a professional cameraman who usually plies his trade in advertising photography. He recently acquired some sports photography experience capturing the Welsh Rugby Union team on a pre-World Cup training camp in Switzerland. However, he has swapped the Swiss Alps for the hills of Tuscany for the near future.

Ollie was enjoying a barbeque at club director Tom Cullen’s house last season when Tom broke the news that the club would be in need of a new photographer. Ollie replaced Duncan – a man whose photographs became synonymous with Dulwich’s exile and triumphant return to Champion Hill in 2018.

Big shoes to fill, indeed. But Ollie was quick to avoid the comparison.

“Having looked at Dunc’s photos and now looking at mine,” he said, “we certainly have very different styles.

“It’s all about what comes naturally to you – much like your writing style. I can’t put my finger on why my style is different to Dunc’s, but it certainly is.”

When Duncan left the role he explained: “I really miss going out on a Saturday and watching the game without a massive rucksack on my back.”

Being forced to temper his passion for the club with the responsibilities of a job, combined with his long commute from east London, meant Duncan enjoyed his work less and less.

I put the same issue of commitment to Ollie, who also has other weekend hobbies including surfing. However, Ollie was certain that it would not be a problem. “I can’t commit to covering every game, and I still want to go as a fan and enjoy the games. I made that clear and Tom made it so easy for me to want to be part of the photography team as well as being a fan. He was really understanding.”

Ollie intimated that he was willing to share the role around with anyone who may be interested, and even suggested that he already has an able deputy in place. “While I was over there [in Switzerland], I did a little Facetime with Jules, told him how to use my camera, and he shot the Dulwich Hamlet versus Tottenham Hotspur game on my behalf, and he didn’t do badly at all!”

So what is it about Hamlet that hooked Ollie, among others, immediately – and binds them so closely to the club that they are willing to sacrifice their time to volunteer?

“I’m loath to say that it’s the community aspect because everyone says that, although it is brilliant what the club does for the community.

“I think the atmosphere’s amazing, but it’s more just the people who are there – I felt very welcome straightaway. It’s a really amazing mix of people, the diversity there is really nice and something I’m really proud to say I’m part of.”

In addition to his cousin, Jules, Ollie’s house is completed by two other Dulwich fans – a pink-and-blue house, to which he quipped: “I don’t know whether that’s a good thing or not”.

Casting his gaze to the future, Ollie can see no further than Champion Hill.

“At the moment I’m certainly enjoying shooting, so fingers crossed it’ll be a little while. Depending on whether we get promotion, I’d love to follow the club up to the higher leagues if we can. I hope that wherever Dulwich Hamlet go I’m not far behind.”

It appears fans will be able to enjoy Ollie’s photographs for many matches to come.