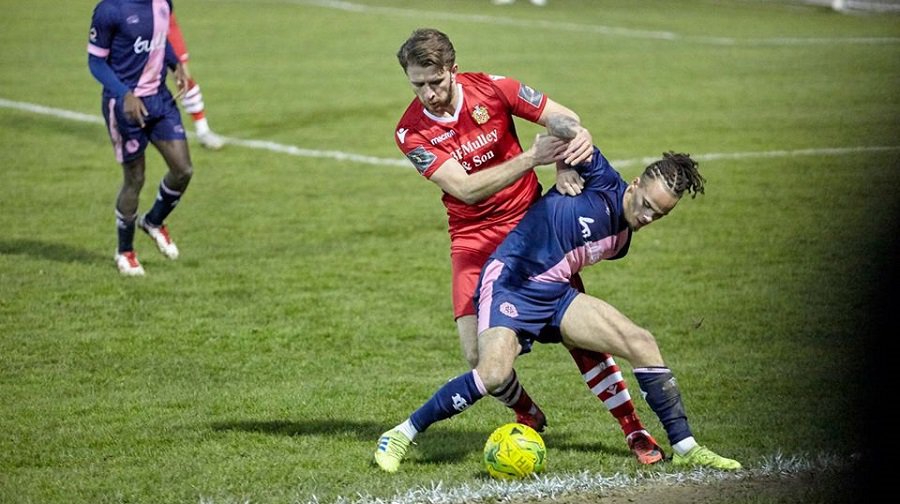 Dulwich Hamlet miserable season plunged to a new low as they were knocked out of the FA Trophy in the first round by Hornchurch of the Isthmian League.

It was a deserved defeat for the Hamlet, who didn’t really test home goalkeeper Joe Wright after the seventh minute when he saved an effort from Lionel Ainsworth.

The hosts, who are fourth in the seventh tier, took over after that and always gave the impression they would make the breakthrough and have enough to progress to the second round. They only needed one goal, scored by Nathan Cooper in the 53rd minute in front of an attendance of 454, and Gavin Rose’s side couldn’t muster a response.

Hornchurch, managed by the experienced former Stevenage and Gilliangham boss Mark Stimson, could have gone in front much earlier. Chris Dickson had their first chance but couldn’t find the target in the eighth minute.

Former Millwall attacker Lewis White almost had an opportunity to get in on goal but Wright quickly saw off the danger.

The next chance, in the eighteenth minute, fell again to White but he tried to pick out Ainsworth rather than testing Wright himself.

Dulwich’s Dylan Kearney tried his luck from distance but was off-target as a poor first half ended in stalemate.

The visitors showed no improvement after the break as the hosts again took up the running. And they got their reward eight minutes into the second period when Cooper volleyed past goalkeeper Preston Edwards.

Quade Taylor then should have brought Wright into the action but he missed the chance at the back post.

Hornchurch attacker Jordan Clark had two opportunities to put the tie firmly beyond Dulwich’s reach but he couldn’t find the target with one effort before Edwards saved his second attempt.

The home side were dangerous on the break and created a number of chances with Dickson firing a free-kick over with sixteen minutes left.

Two minutes later Edwards had to race from his goal to clear a through-ball before he saved from Matt Johnson.

Rose sent on Dominic Vose for Kearney with time running out but the pattern of the match was the same. Hornchurch spurned another chance when Johnson and Dickson combined but the latter sent his shot wide.

The Hamlet finally stirred in the attacking third but Vose shot over the bar before, in the last minute, Nyren Clunis crossed from the left but Taylor couldn’t steer the ball towards goal with his volley.

There were five minutes of added-time but Hornchurch defended stoutly and Wright wasn’t tested again.

Dulwich are back in National League South action this Saturday when they travel to Hungerford Town looking for a first league win since August.

They then host Hampton & Richmond Borough at Champion Hill on Boxing Day. Both fixtures kick off at 3pm.