Sophia Sahai, Anna Forster and Margaret Forster making an impact in the pool 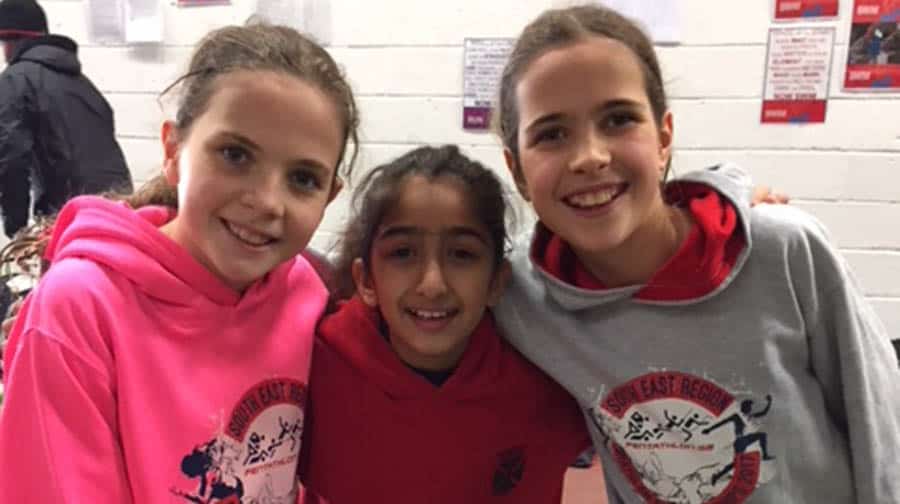 THREE GIRLS from James Allen’s Preparatory School are celebrating after storming to gold in the British Biathlon Championship in Solihull last weekend.

Sophia Sahai, Anna Forster and Margaret Forster competed in the under-10 team race and each put in personal-best performances in the pool and on the running track to claim first place.

They have now added the national title to the gold medals they won in the South East Regional Championship in October. Each race consisted of a 50-metre swim and 800-metre run and the girls were competing against the best biathletes from other top-ranked schools around the country.

They finished comfortably ahead of the competition in the team rankings thanks to their combined scores. Speaking after the race, Margaret said: “I was very excited when we got to the finals but when we arrived at Solihull you could feel the tension. The running was the most nerve-wracking of the two events.

I was thrilled to be part of the winning team.” Her twin sister Anna said: “I really enjoyed the Biathlon Finals and could always count on my team-mates Margaret and Sophia to calm my nerves. It was a tough competition but the three of us worked together to get the team gold medal.” At the same championships, Trinity Shaw took part in the under-12 individual race and finished eighteenth out of nearly 70 competitors.

This position is especially impressive as she was competing a year above her own age group.

Sophia added: “It was really daunting. Anna and Margaret did really well and we were proud to win gold against the fastest runners and swimmers in the country. It was also really inspiring to see Trinity do so well against older girls in both events.”

The competition was organised by Pentathlon GB, the national governing body for the modern pentathlon.