Basketball England have been expanding their Jr. NBA offering 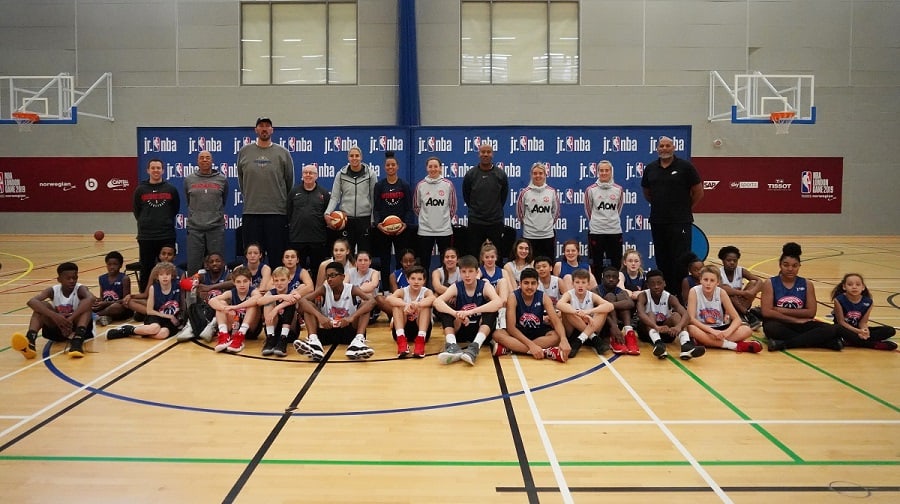 LUCKY STUDENTS from Southwark were graced by basketball legends for a once-in-a-lifetime coaching experience – just hours before the NBA London Game at the O2 Arena last week.

Three boys from Kingsdale Foundation School were part of a group of 40 children who spent three hours working with NBA stars and coaches at a Jr. NBA day clinic at CitySport in Clerkenwell.

The event was staged as part of the activities relating to the NBA London Game 2019 between the Washington Wizards and New York Knicks, providing another fantastic opportunity for Jr. NBA participants to enjoy incredible experiences through basketball.

Three-time NBA champion Bruce Bowen, 1978 champion Phil Chenier, Wizards legend Gheorghe Muresan, who is the tallest player ever to play in the NBA, and John Amaechi, a Brit who played in the NBA for three different teams between 1995 and 2003, were among the stars coaching on the day.

Kingsdale student Abraham Kenan, 13, said: “The sessions made me sweat a lot and were hard work.

“The coaches know their stuff and were clearly helping us to get better. They’ve helped my footwork and reminded me of the importance of keeping my head up.

“I’ve been watching them and trying to learn – it means a lot for me to see them in person.”

Other stars helping out included 2015 WNBA MVP Elena Delle Donne, her Washington Mystics team-mate Natasha Cloud and their coach Mike Thibault, who has the most wins of any women’s coach in the sport.

All the athletes completed a question and answer session with the children before posing for photos and signing autographs.

Jr. NBA Basketball England Leagues are designed to leverage the excitement of the NBA to inspire participation, and the programme aims to promote the shared NBA and Basketball England values of teamwork, leadership, fitness and healthy living through league games, Jr. NBA youth clinics, and league Finals events.

In 2018, Basketball England expanded their Jr. NBA offering significantly, moving from five to thirteen leagues across the country, with more than 4,500 children aged eleven and twelve now participating in the programme annually.

Kingsdale teacher and basketball coach Chetan Barot said: “The kids have been so excited about coming. The stars being here provides them with some inspiration.

“The drills they did were really good – it’s interesting to see sessions delivered by people from the NBA.

“It’s good for basketball players to get something like this because it’s normally the sessions for footballers from the FA or the rugby players from the RFU.

“We’ve never had a chance like this before. It helps the players improve by working at a higher standard.”

To find out more about Basketball England the Jr. NBA programme, please go to www.Basketballengland.co.uk/Jrnba