It was Surrey's first defeat against Hampshire at the Ageas Bowl 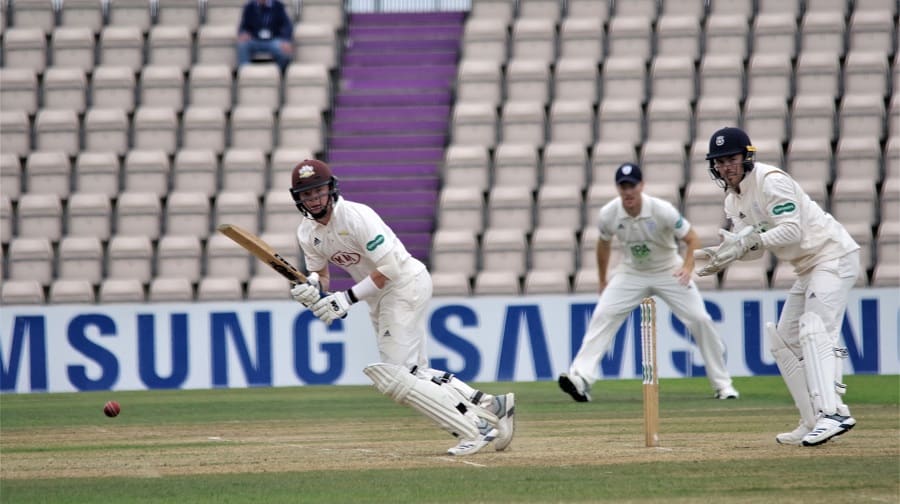 Ollie Pope's performance was one of the few positives against Hampshire. Photo: Mark Sandom

Michael Di Venuto slammed Surrey’s display against Hampshire as “embarrassing” saying his side had played “some of the worst cricket I’ve ever seen” in their 272-run loss at the Ageas Bowl.

Usually an opening batsman, Organ celebrated figures of five for 25 on his fifth first-class appearance – having only come on to bowl due to the umpires declaring it too dark for fast bowling.

Organ, who had scored a half-century with the bat earlier in the match, found good turn as he dismissed Ben Foakes, Jamie Smith, Rikki Clarke, Conor McKerr and Jordan Clark as Surrey were skittled for 151.

Hampshire, who hadn’t tasted Championship victory since winning on the Isle of Wight in May, took 21 points to reigning champion Surrey’s three – though both sides were safe ahead of the match, with no hope of challenging for the title.

It was also Hampshire’s first victory over Surrey at the Ageas Bowl.

Surrey were given an imposing target of 424 in a smidgen under five sessions, knowing that a solid start was needed to platform any hopes of victory.

But that didn’t come as Keith Barker struck with his first delivery, the seventh of the innings, as Dean Elgar was caught behind off the face of the bat while attempting to leave.

In the fifth over, Kyle Abbott found Scott Borthwick attempting a straight drive but a slight nip away off the seam saw another nick through to Lewis McManus’ gloves.

That left the visitors 12 for two, and it became 37 for three six overs later as Mark Stoneman walked across his stumps and Ian Holland dislodged his leg stump.

Ollie Pope caressed a fine 40 but he too edged Abbott behind – the England hopeful furious with his nothing shot as he trudged back to the dressing room.

As bad light descended on the Ageas Bowl, the umpires advised that only slow bowling could be utilised, which Organ used to his advantage.

The 20-year-old off-spinner wouldn’t have been too proud of the long hop that Foakes lunged to Sam Northeast at mid-wicket but beautifully deceived Smith before McManus stumped him.

Organ then lured Clarke into an attacking hoick, which picked out Holland at deep midwicket, and McKerr was lbw.

Clark top-edged to Fidel Edwards to give Organ his fifth and Liam Dawson castled Morne Morkel for his 200th first-class wicket to wrap up the three-day triumph.

Earlier, McManus and Dawson both completed half-centuries as Hampshire extended their lead with 100 day three runs.

Barker and Abbott scored 16 and 18 runs respectively to see the tail wag – but both departed, caught behind and stumped, to round off the innings.

“It was embarrassing,” Surrey coach Di Venuto said. “I have been involved in a lot of cricket and in the last two days we have dished up some of the worst cricket I’ve ever seen.

“We’ve got a lot of people who are not in good enough form. There isn’t a lot of confidence other than the stand-out man Ollie Pope.

“The first session on the first day we played as a unit and looked good, similar to last season, but the last two days was the worst cricket I’ve seen.

“I’ve told the players all that. They should be embarrassed.”