Dulwich Hamlet have ambitious plans for the future 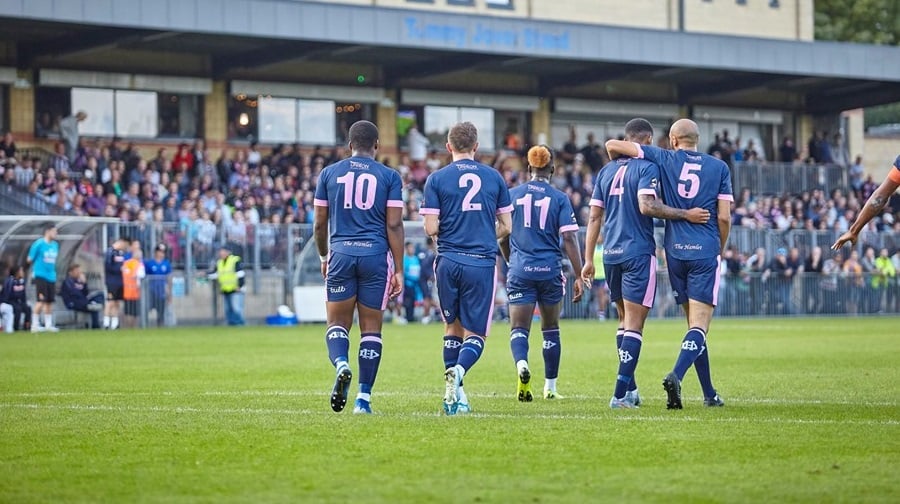 Dulwich Hamlet announced last week that a joint application for a new stadium and residential development at Champion Hill had been submitted to Southwark council and the club were inviting comments from the local community.

DHFC chairman, Ben Clasper, explained to the News why the new application is crucial to Hamlet’s progression as a club.

The club was evicted from its ground in early 2018 and fought an arduous battle to return home by Boxing Day last year. However, its current ground is not fit for purpose and so the club entered negotiations in early 2019 to move into a new stadium adjacent to the current ground on the same site.

An initial application was submitted in February 2019, but no final determination was made by Southwark council. The club hopes this new application will be determined by August 22. Under the new plans, work on a new astroturf pitch will begin in October, with construction of the stadium taking place over the next season-and-a-half.

So why is this application so important?

A club statement said that staying in the current stadium was not an option in the long-term. Currently, Dulwich is only maintaining its existence because Champion Hill’s landlords, Meadow Residential, allow DHFC to occupy the stadium on a rent-free basis and to cover its maintenance costs through revenue from the bar and catering facilities.

Contributors to a local forum have suggested that the club have bowed to the whim of their landlords. However, Clasper said, “even if Meadow walked away and gifted us the whole thing, just to do the renovations like sticking plaster that we’re doing at the moment – we’re looking at around £2.2 million. That is obviously money that the club doesn’t have.”

In addition, the limited capacity and facilities of the current ground would not allow Dulwich to play in the National League should they achieve promotion. Only a new stadium at Champion Hill will allow DHFC to maintain its playing squad and coaching staff, continue to progress up the football pyramid, facilitate its 3,000-plus crowds and continue its work with groups on a long-term basis.

In that case, why can’t Dulwich play elsewhere temporarily while a new stadium is built on the existing site?

Clasper made it clear that relocating would be impossible. There are no other stadiums with 500 covered seats in Southwark – a minimum requirement for National League football. Moving out of the Borough would cause a 90 per cent drop in revenues, as experienced by the club when they migrated to Tooting last season. Even a temporary relocation for two seasons would create a debt in excess of £1 million unless the club was to cut the coaching and playing budget and start again in the lower leagues. Therefore, it is essential that the team continues to play at the current ground while construction of the new stadium is completed – and that is what this application allows for.

So why will the Council agree to this application where others failed?

Clasper said: “Positive engagement is the key. I can tell you categorically that I’ve been in all of those meetings, I’ve listened to the feedback and I’ve seen that feedback incorporated entirely into the next submission.

“We’ve also tried to talk to every local group, schools etc., to ensure that the application is sensitive to all of their interests. So, it doesn’t feel like it’s parties combating each other anymore, but parties collaborating to take everyone’s thoughts into consideration.“

One of the major contentions that has plagued Dulwich’s proposals for a new ground in the past has been opposition to building on Metropolitan Open Land (MOL). However, the club insist, “no section of the stadium building will be on MOL, all buildings will be on the existing Champion Hill site. The pitch though will be on our existing astroturf pitch which is on MOL and will be enclosed which it is not today.”

But the statement adds, “the renovation and the enclosure of that pitch was already part of the Southwark Plan for Green Dale Fields before this application was submitted and is therefore due to be actioned regardless of whether there is a stadium adjoining the site.”

While it seems the club is seeing eye-to-eye with both Meadow and the council, the same cannot be said for the relationship between the latter two. In April 2018 Southwark council leader, Peter John, tweeted “Is this (Meadow) the most stupid development company in history or simply the nastiest?” The council were forced to launch an investigation into John’s conduct that cost them over £13,000.

Speaking to this paper in June 2019, John described the fee as a “shocking waste of public funds to satisfy the thin skin of an American developer”.

However, Clasper was keen to distance the club from the spat. He said: “I think you’ve got to separate these two things. The Peter John issue was nothing to do with the planning application. Peter’s not on the planning committee and doesn’t attend any of the planning meetings.

“It was a throwback to something that had commenced a year or two ago, whereas what we’re doing is starting afresh…working collaboratively. We can’t stop individuals making comments and I’m sure we’re going to get more as the process goes on, because everyone has a right to say whatever they like.”

Dulwich fans will welcome the renewed relationship that DHFC has built with its landlords and council. However, some had reservations about the initial plans that were revealed in February: doubting that the new ground would be able to hold a 4,000 (possibly rising to 5,000) capacity; and bemoaning the lack of cover on three sides of the proposed stadium.

Clasper defended the new plans: “It will [hold 4,000] – we’ve done the calculations. To illustrate, we’ve just put in new terracing at the current ground which adds space for another 300 people – a big difference from only 20 metres [roughly] of steps four tiers high. So, you can imagine what is achievable with six tiers 200 metres in length – it shows you don’t need to build big stands.”

In addition, the new pitch will be lowered to allow for more terracing and better sightlines.

With regard to crowd cover, Clasper said: “It’s not being asked for on day one because we wanted to consult more with the local community groups. One of the main concerns [of those opposing the new stadium] is that people don’t want a football ground with four stands that dominate the whole area – and I’d agree with that.”

Clasper indicated that canvas covering to be rolled out only on match-days is a possibility being explored, but insisted that crowd cover was “a decision that the community should take”.

The club has encouraged the local community to review the application online and submit their opinions to the council.  A press release read: “We have no wish to tell people what to say but we do want to encourage you to have your say. Feedback from the community and communicating to the council the position the football club has in our community will be a significant factor in any decision.

“If you want to help preserve the future of DHFC in our community please make sure you show your support by August 22, 2019. It is important the volume of comments reflects the level of support for the club in the community.”

Feedback can be submitted by following three steps. Click on this link https://planning.southwark.gov.uk/online-applications/