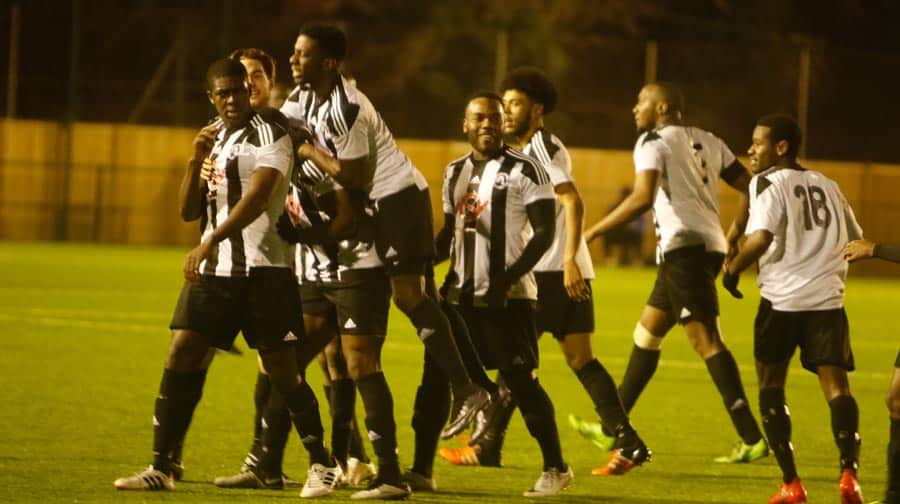 Fisher secured a vital 2-0 win over Beckenham Town in the festive derby on December 27.

The result, coupled with Beckenham’s 3-1 home defeat to AFC Croydon Athletic on Bank Holiday Monday, means that the Fish are now just one point away from their rivals at the foot of the SCEFL Premier Division table.

A bumper crowd of 279 made their way into St Paul’s and they had to wait just 17 minutes for the opening goal.

Toyo Adeshina delivered a cross into the penalty area which was dropped by the Beckenham goalkeeper, straight into the path of John Ufuah, who kept composed to steer his shot into the bottom far corner with a left-footed drive from a tight angle. The lead was doubled and the victory was secured with just nine minutes remaining, but in highly controversial circumstances. A Fisher corner was swung in from the right – that was headed back across goal to find central defender Dwayne Agyemang, who headed towards goal, clipping the underside of the crossbar.

Early signs suggested that the ball did not cross the line, but assistant referee Daniel Wyatt flagged to award the goal.

Beckenham Town coach Billy Walton was seething that the goal was allowed to stand. He told Kentish Football : “Can he really see it goes over the line? I don’t think you can.

“There’s a melee of players and without technology you can’t tell me if that went over the line?

No one can tell if that went over the line. “Everyone shouts; there’s a big crowd here today, everyone shouts and he gave it!” Regardless of the controversy, Fisher held on for an extremely important win to give themselves hope of avoiding the drop in the second half of the campaign.