Fisher were seconds away from reaching the Challenge Cup final 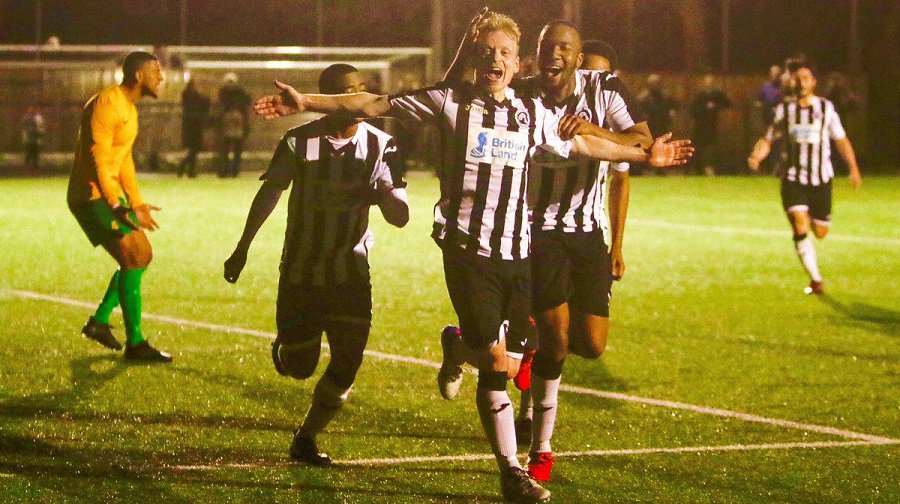 FISHER BOSS Dean Harrison was furious with the officiating after seeing his side’s chances of reaching the Challenge Cup final snatched away in dramatic and controversial circumstances at St Paul’s on Tuesday night.

Fisher, after a 0-0 draw in the first leg, went ahead in the tie through Mathieu Ramsamy’s goal in the second minute.

Fisher doubled their lead and looked like they had one foot in the final when Pat Geddis finished Richie Hamill’s free-kick to the net two minutes before half-time.

The hosts were on the defensive for the majority of the second half against the side that are top of the SCEFL Premier Division, but were comfortable and there weren’t enough stoppages to suggest there would be so much added-time.

Corinthian made it 2-1 in the 88th minute when Oscar Housego fired in direct from a free-kick on the edge of the box.

Harrison later revealed there was some confusion among the officials over how much injury-time should be played.

That contributed to the controversy. Fisher time games themselves, and Harrison claimed there were 97 minutes gone when Corinthian thumped a free-kick into the box and Jack Bath scored to make it 2-2.

“When I’ve asked the referee at the end he said he’s played six. From what I gathered they scored in the seventh minute of added-time. I don’t know where it’s come from.

With away goals not counting until after extra-time, the game went into the added period when another questionable refereeing decision led to Corinthian’s third.

Andrew Mott appeared to be pushed in the back as he brought the ball under control in his own half, but instead, to the astonishment of most of the 201 in attendance, the referee gave a free-kick to the visitors for handball.

Sam Bewick curled a delivery from 40 yards into the box, and the ball missed everyone before nestling in the bottom corner.

Harrison was asked about the award of the free-kick.

He said: “I couldn’t tell. But I think he’s nudged Motty in the back and the ball’s hit his arm. The ref’s got to see that, he’s right in front of him.

“They’re assessed quite regularly, I think there was an assessor here tonight. I don’t know what he’ll make of it. We have bad performances week-in, week-out. It’s very rare you get a good ref and I always tell them when they’ve reffed well.

“In all fairness, I didn’t think he had a bad game until it was getting towards the end. He got the injury-time out of nowhere and then in extra-time it was absurd, the things he was doing.”

Harrison was frustrated with his side’s inability to defend dead balls.

“They’ve scored from three set-pieces. I’ve told the boys if you’re going to win at this level you’ve got to defend set-pieces better,” Harrison continued. “We haven’t dealt with that. Whatever the ref has done or hasn’t done we’ve got to deal with that and we haven’t.

“There are a lot of positives, we went in 2-0 up and we thought we were in control of the game. For most of the second half we were quite happy with how we were playing.

“I thought we had enough breaks in the second half, two, three, four opportunities to kill the game off but the final ball wasn’t right. We lacked a bit of quality with our passing and our decision-making.

“It’s come back and bit us on the bum.

“We spoke about the start, we thought they would be a bit nervy. We wanted to get out there with high energy and tempo and I went with three quick boys up top to get at them. And it worked.

“We get the second from the set-piece which was lovely. Second half, I don’t know. It’s all fallen apart.”

Harrison paid tribute to the support his side received in Rotherhithe. “It was a great crowd, they’re always good here. They sing their hearts out, they’re fantastic and all the boys appreciate it and respect what they do.”

Fisher have to quickly put this disappointment behind them as they continue their challenge for promotion.

The Fish are just four points off Corinthian, and two behind second-place Cray Valley, ahead of their trip to Bearsted this Saturday.

“It’s a fantastic season, I’ve just said that to the boys in there. We’ve got eight games left and we’re still in a title race.

“We’ve fallen away a little bit, we dropped some points. But Corinthian dropped points Saturday, so you never know what can happen.

“We’ve got to bounce back Saturday. I think it’s going to be hard for the boys to pick themselves up but we’ve got to do it and stay at it, we can’t let ourselves be down.

“I’d like to think we can turn it that way and it doesn’t go the other way where we feel a little bit hard-done-by.

“We don’t play the victim here, everyone works hard and is honest and hopefully we can get at it Saturday.”