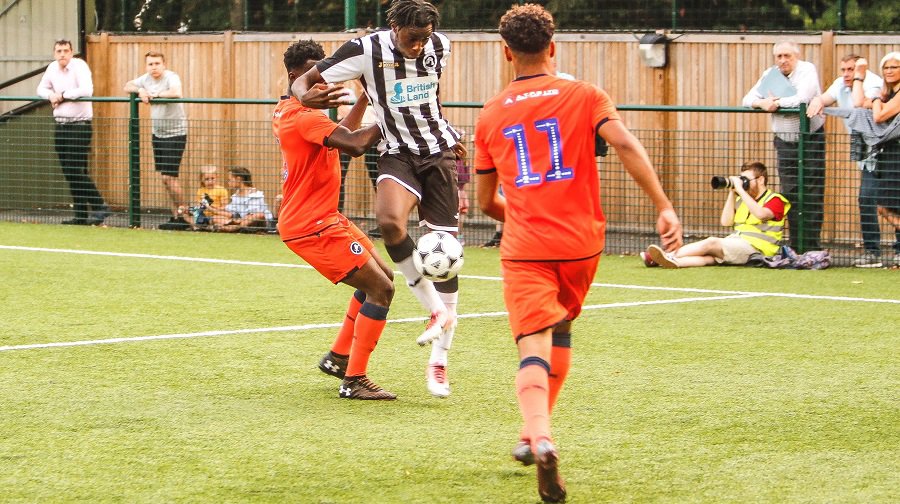 Fisher in action against a Millwall XI. Photo: Dave Anderson

Fisher boss Allan Fenn has revealed he doesn’t have a playing budget this season – and said he turned down a paid job elsewhere because of the Rotherhithe club’s allure.

Fenn took over from Dean Harrison this summer, after Fisher finished third in the SCEFL Premier Division last season.

Fenn also revealed he was told he would have all but three of last season’s squad to work with, only for just three to remain.

That has meant a huge rebuilding job at St Paul’s, where Fenn handed some trialists the chance to impress last Friday in Rotherhithe against a Millwall XI, which ended in a 3-0 win for a visiting side that boasted players who have already played senior games for the Lions in pre-season.

Fenn has lost stalwarts such as Richie Hamill this summer, though top-scoring midfielder Rob Brown has stayed and will be captain next season.

“The biggest issue I’ve had since I took over was who’s staying, and I was told seventeen out of 20. And only three have stayed,” Fenn told the News.

“Out of the 22 [Friday night] I’ve got fourteen, fifteen [for next season]. We’re getting there.

“We’ve got no budget at all, everyone here is playing for nothing. They’re playing because they want to come here for me and my management team, and also because of the name of Fisher.

“I’ve got meetings with potential sponsors. Anything that comes into the pot will go straight into the playing budget.”

Asked if not for financial gain what attracted Fenn to Rotherhithe, he replied: “The name of Fisher. If you’re in football then you know the name Fisher. It’s got a great history.” “When I was a kid I used to train with Millwal boys in Suffolk Park. I took a lot of lessons off Terry Hurlock, Les Briley. I’ve got an affiliation with Millwall – and I don’t like West Ham, so it works!

“The potential here is to make people aware of who we are. We’ve got to a certain stage but we need to go further. We need advertising. We need to be a bit better with promoting the club, we need to be doing more with the community that we have.

“We need to grow. We know we’ve got a great club, the players have bought into it.

“If it means going with [zero budget] at the moment I’ve got confidence in my own ability and the players we bring in. At the moment we know where we stand. We’re a very well run club with a great support base.

“There have been about seven players who have turned down money to come and play for me. I turned down a job with a club in the Southern Premier with a £3,000-a-week budget. I’ve come here for nothing, simply based on what I believe we can do here, in terms of the area, the club the fanbase, everything.”

Fenn intends to do as much as he can to make the club successful. “I’ve got good ties with Millwall, with the coaching staff. I know the lads at Charlton and Palace. What we need to do is build on the community here. We’re a big name in football and we want to build on that as much as possible.

“Me and the lads will be going down to the local Sainsbury’s and packing their shopping for them to get fully involved in it all.

“It’s a cherry ready to be picked and I intend to be that person that takes the club forward.”