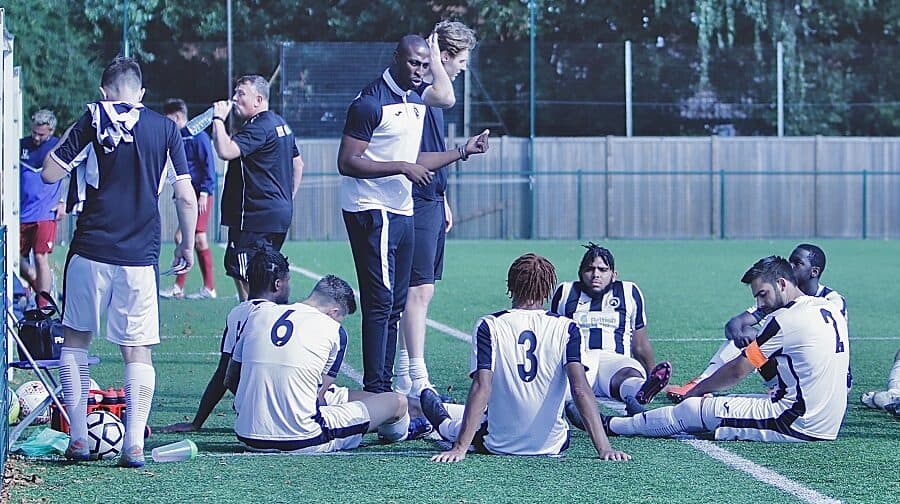 There are some things money can’t buy.

One of those things is the prestige of Fisher, and the meaning in representing the Rotherhithe club based in one of the most iconic football settings in London, Canary Wharf rising beyond the floodlights on a cold Tuesday evening in winter at St Paul’s.

Despite having a playing budget this season of exactly zero, even the lure of cash offers from rival clubs hasn’t been enough to tempt some of the current Fisher squad.

Those players saw their decisions to stay justified as they reached the first qualifying round of this season’s FA Cup, the furthest in the history of Fisher FC, probably evoking memories in older fans of Fisher Athletic getting to the first round proper twice in the 1980s.

After beating Horsham and Tooting & Mitcham in previous rounds, Fisher’s dream ended when they lost 3-1 to Cray Wanderers, a side two tiers above them in the Isthmian League Premier Division and boasting players with experience in the Football League with the likes of Charlton, Gillingham and Leyton Orient.

But Fish boss Ajay Ashanike was full of admiration for his side, who are playing for nothing more than the love of the game and their club.

“At the moment I’ve got no budget whatsoever,” Ashanike reveals to the Bermondsey Biscuit and Rotherhithe Docker magazine. “At Tower Hamlets we weren’t getting paid, but coming to Fisher it was totally different.

“With these boys, they’ve got fans actually singing their names, people talking on Twitter about them. That makes them happy, it makes them want to be here.

“We went over to play Cray Wanderers and with the budget they have we shouldn’t have been in the game. But we stayed in it, we didn’t give up and the boys weren’t outclassed by anyone.

“You would never have believed we were a team with no budget.”

Fisher earned £3,319 in prize money for their FA Cup exploits this season. “To some clubs that might not sound much,” Ashanike says, “but for a small club like Fisher that means a lot to us. That will help us this season. Credit to the boys, they knew what was at stake and they went out and did the business.”

Ashanike, who grew up in Tower Hamlets, had an unusual route to Fisher. While playing for Hamlets he met an agent who felt he should be at a higher level, and a move to Gaz Metan in the Romanian region of Transylvania was organised. Money problems at the club meant Ashanike left after three months before going back into non-league football in England.

He quit playing at 25 to start coaching Hamlets youths, and from there progressed to first-team manager in 2017. Still only 31, he has an impressive record of helping young players earn contracts at professional clubs such as Watford, Southampton and Colchester.

Ashanike initially joined Fisher as assistant to Alan Fenn in the summer of 2019. But the Fish, who had finished third in the SCEFL First Division the previous season under Dean Harrison, couldn’t replicate that form after losing a number of key players.

Fenn left last October, Ashanike took over and he could hardly have imagined what was to come.

Covid-19 would cause the suspension of football the following March, and eventually an end to the campaigns from Step 3 down.

But before that, last December, there was an incident at AFC Croydon Athletic when alleged racist abuse of one of his players led Ashanike to take his side off the pitch and the game was abandoned. St Paul’s is an iconic football setting in London

“It was a massive moment in the season for us,” Ashanike admits. “Something was said on the pitch and it really upset my player. The player in question had had a really bad experience of racism before. It really affected him.

“As players, as a club, as the manager, it was only right to support him. We gave him all our support. The worst thing to come out of it was after that game [the player] retired from playing football.

“You don’t want to be losing players and see them not play football. That really upset me. But he knows where we are and if wants us he knows we’re still there for him and we still show him support.”

Fisher, and other clubs classed as non-elite in English football, are in something of a pioneering position this season. Whereas the government performed yet another U-turn recently by shelving plans for the return of fans in the professional leagues, at Fisher’s level supporters have been attending games.

The hope is the government don’t flip-flop again, and for Fisher that means potentially attracting supporters from other clubs, including Millwall.

Ashanike has a solid sales pitch.

“The fans here are amazing,” he says. “On their day they are second to none. I came from Tower Hamlets where there were no fans. Coming to Fisher it was completely different. We’re just happy they follow us about and hopefully it can carry on. “They’re like our twelfth man in every game and if we could get more that would only benefit us. We want everyone in Bermondsey to support us and get behind the team. We need everyone to drive us this season.

“There’s a lot of space to social distance in our stadium, so I don’t see why we wouldn’t be allowed fans. We should be able to carry on with what we’re doing.

“We’ve got a young, exciting team this year. We always try to play attractive football, especially at home on our 3G [artificial pitch].

“It would be good to get to more people in. It’s a promise from us that it’s as safe as possible to be in that ground. We follow the right protocols for everything.

“It would be nice to see new faces, especially Millwall fans to come and support us. We’re right around the corner.”

*The Bermondsey Biscuit & Rotherhithe Docker is a quarterly magazine from Southwark News.