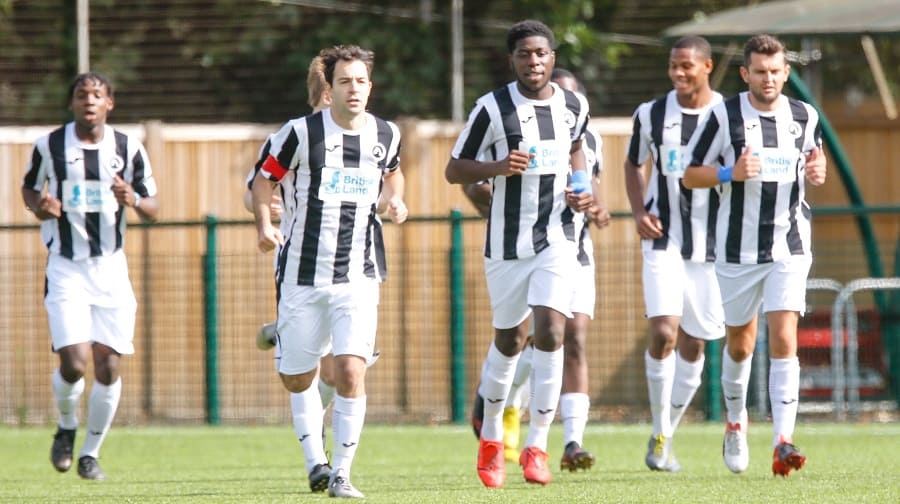 Former Fisher captain Robert Brown has opened up on what he believes was behind the club’s slump this season – citing a lack of discipline as one major reason.

The Fish, under manager Dean Harrison, unexpectedly launched an exciting promotion challenge in 2018-19 on one of the smallest budgets in the SCEFL Premier Division.

The Rotherhithe club just fell short, finishing six points off Cray Valley who claimed the only promotion place in the 20-team league.

Harrison left last summer and was replaced with Allan Fenn, a former manager of Ilford who brought in Tower Hamlets boss Ajay Ashanike as his assistant.

Fenn didn’t have a budget and was left with only three of the previous season’s squad, with key players such as Richie Hamill departing.

Brown stayed but left a month into the season for Welling Town as Fisher were on a run of ten games without a win in all competitions. He had a spell with Punjab, before he re-joined Fisher earlier this month.

“I think I was so used to the team last year and how it was run with the staff and players, that I came back expecting it to just carry on,” Brown told the News last week. “We had a very tight ship, strict fines in place which I was on the committee for with other senior members. There was no lateness for games or training.

“When someone spoke everyone listened, we had discussions prior to every game in team meetings and discussions before training – it was as professional as it got at this level under Dean, Neil [Hunter], Rich [White] and Jason [Birchill].

“No player spoke back to the manager and I remember being in shock when I heard it numerous times [early this season] as that was a big no-no last year.

“I realise how good we had it last year and how grateful anyone should be if they are in a winning team, most of all if they are playing with friends.

“Some days I think about giving Fenny a call and saying I hope he is well. He backed me at the club, and me leaving was nothing personal against him though I’m sure it came off like that.” Fenn left in October and was replaced by Ashanike.

Brown continued: “The good thing that came from all of this and me leaving was playing against Fisher, it made me realise I wanted to come back. I realised it was home.

“Even though the fans might have felt annoyed or disappointed when they saw me leaving, I still missed the fans, the feel and the buzz around the club – it’s everything I wanted in a football club in terms of kindness and support.

“People need to remember that Fisher went under a tremendous amount of change after Deano left in the summer. The whole squad left with him, basically, and at one point I was the only player left from the previous year’s squad.

“The Fisher squad last year had been together for two seasons. We got promoted out of the SCEFL Division One, signed two or three players and kept the boys to then finish third in the Premier.

“Everyone knew everyone closely, we knew each person’s positions, their personalities, and the squad got better every game. A certain bond forms when you get promoted together and stick together. In non-league football, you’re lucky to get the same squad together for more than half a season, I’m starting to realise.

“I’m not sure if I could put my finger on one thing that went wrong [this season], things were different for sure, but I think it would be normal for any squad to take time to adjust after losing a number of core players.”

Steps 3 to 6 in the football pyramid this season were voided last week, bringing seasons to an end including Fisher’s.

Brown works in social media and is currently doing that from home.

He’s missing the training sessions and the Saturday and Tuesday fixtures.

“Football means everything to me,” he said. “It’s always been a part of my life and when football isn’t right, I’m not right mentally and I look for ways to fix it.

“I know Fisher long-term is right for me. I want to give back to Fisher in any way I can. With Covid-19, the uncertainty of football and the season, I miss it, of course I do. I have the rest of my life after I retire to sit around on Saturdays and go for walks to feel active.

“I’m going for runs every other day and walking every day to stay fit, but I want to be back on the pitch pinging through-balls and doing one-twos. I want to set my mate up for a goal again like I did last game. That feeling beats any other feeling. Staying at home and doing it on the PS4 just doesn’t have the same feeling to it!

“At the end of the game [against Punjab at St Paul’s, before the suspension], we couldn’t shake the supporters hands due to Coronavirus and I remember we all clapped them longer than usual.

“When I got subbed, the fans started chanting my song and name, and it meant the world to me, it felt like for the first time in a long time that football was normal again for me.

“I will never take the people who watch us play at St. Pauls for granted and who clap me when I score a goal or play well.

*If anyone needs social media expertise to raise awareness about their brand, you can contact Robert Brown on Twitter @10Brown10.