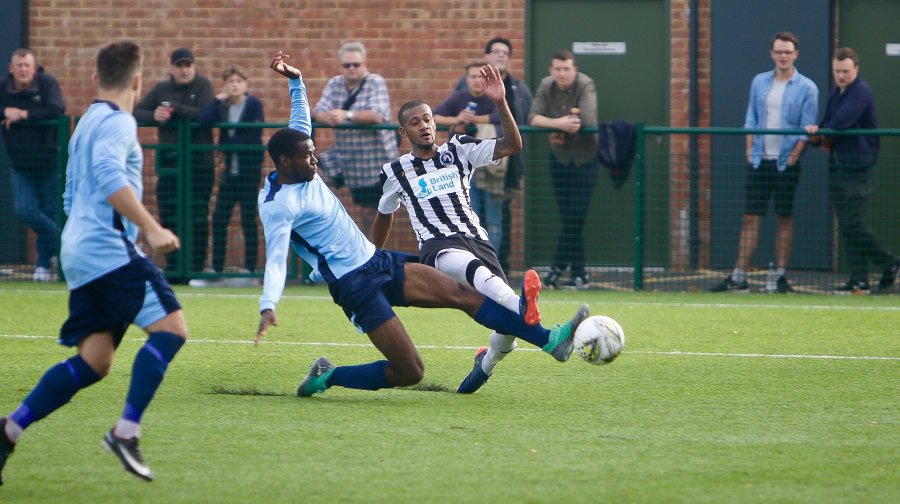 Fisher in action at St Paul's in Rotherhithe.

FLOOLIGHT BULBS that haven’t been replaced are putting Fisher games at risk of being called off – which could result in fines, the club has said.

There are currently seven bulbs out of sixteen at St Paul’s out of commission, and efforts by the club to elicit a response from Millwall Community Trust, who manage the ground, have so far failed, it is claimed.

SCEFL clubs could be liable for fines of up to £1,000 if they don’t fulfil scheduled fixtures.

In addition to those worries, Fisher boss Dean Harrison recently revealed to the News that his squad is limited to just one training session per week, down from two per week last season when they achieved promotion from the First Division to the Premier Division.

Fisher pay MCT £90 per hour for use of the facility. They train for two hours, from 8pm to 10pm, when the lights are abruptly switched off. Fisher have also contacted MCT over the fee, to see if there is a way to reduce it, but say they haven’t received a response.

Outside of the ground, Fisher has said local residents complained about the noise from the public-address system. The club has since not made announcements or played music on match-days.

Remarkably, despite all of those concerns, Fisher, operating with a budget of £300 a week, one of the lowest in the league, are currently second in the Premier Division table, the ninth tier of English football.

Harrison has been working with the majority of last season’s squad.

“We were training twice a week last season which was coming to about fifteen grand,” Harrison said. “We’ve had to cut that down because the club doesn’t have the money. We’re now training once a week to cut costs and we have to pay five grand a year to play games here, in a ground, really, that was built for us.

“Last year we relied a lot on our fitness, which we used to do on a Tuesday, and our shape work on a Thursday. Now we’ve just got the Thursday to fit everything in. It’s been a bit more difficult than last year.

Fisher travel to Cray Valley this Saturday as they aim to maintain their excellent league form.

Harrison added: “We’re just enjoying it, we’re happy where we are at the minute and we’ll see where we go. We’re enjoying the journey.”

The News contacted MCT for a comment on the issues Fisher raised, but has not received a response.