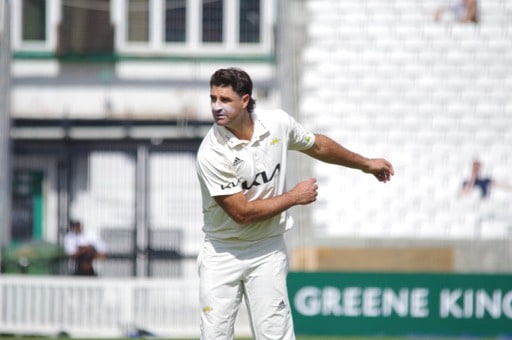 Surrey’s five-man pace attack blew Northamptonshire away for the second time in 24 hours at the Kia Oval, dismissing them for 202 to complete an emphatic LV= Insurance County Championship victory by an innings and five runs inside three days.

Dan Worrall picked up 3 for 37, Gus Atkinson 3 for 26 and Jordan Clark 2 for 43 as Surrey, who earlier in the day had finished off the Northamptonshire first innings for 194 with Colin de Grandhomme taking 4 for 39, strengthened their position at the top of Division One with a third win from five games.

This was a real show of power by Surrey, who earned 22 points, despite the absence from this match of Ollie Pope with illness and the fact Sam Curran did not bowl in either Northamptonshire innings as he continues to manage his return from a stress fracture of the back. In addition, left-arm paceman Reece Topley was rested.

Worrall, though, hugely impressed on his home debut, after being signed last winter from Gloucestershire, and the 30-year-old Australian – now classed as a home player due to his British passport – claimed the vital scalp of Will Young soon after Northamptonshire had been asked to follow on.

Worrall produced an absolute beauty to have New Zealand Test opener caught behind for 3 in his fourth over with the new ball, leaving the visitors on 8 for 2 after Ricardo Vasconcelos had also edged to keeper Ben Foakes off Clark in the previous over.

Emilio Gay, to his enormous credit, then shrugged off a series of nasty blows to both his right and left elbows to hit a number of lovely strokes in a brave 51 and hold up Surrey’s seam battery for an hour and a half.

Gay twice needed on-field treatment to his right elbow in one Clark over just before lunch and soon after his arrival at the crease. Then, on 33, he was struck on his left elbow by a De Grandhomme delivery that spat up at him.

But the most painful blow came just after he had reached a 56-ball fifty with a pull off De Grandhomme, his ninth four. The next ball from the New Zealand all-rounder again lifted sharply and Gay initially looked as if he could not carry on after a stoppage for yet more treatment to the tall left-hander’s right elbow.

Deciding perhaps unwisely to bat on, Gay was then beaten from De Grandhomme’s next ball and also nicked Overton just short of Foakes before Atkinson found his edge again and this time it carried to the Surrey and England keeper.

Atkinson’s first spell of 5-17-2 had earlier also accounted for Luke Procter, well caught just inside the deep square leg boundary by Curran for 9 when the left-hander slightly mis-hit a pull at the young all-rounder’s second ball.

Northamptonshire’s slide continued apace following Gay’s dismissal, with Saif Zaib leg-before for 8 to a searing Overton yorker, Rob Keogh bowled off stump for 15 by another superb Worrall outswinger and Lewis McManus giving Foakes a fourth catch of the innings off Clark.Tom Taylor sparred De Grandhomme to second slip on 18, soon after tea, but Matt Kelly and Simon Kerrigan both enjoyed themselves in a ninth wicket stand of 50 before Worrall returned to have Kerrigan caught at cover for 25 and Atkinson saw Kelly swing high to deep midwicket on 33.

Northamptonshire’s first innings, meanwhile, had earlier lasted just another 10.4 overs after they began day three on 154 for 8, with Procter – who had resumed on 61 – remaining 83 not out from 196 balls and fully deserving of the crowd’s warm applause following a determined lone hand. One of Procter’s last defiant blows was a memorably-struck six off Overton that flew out of the ground over the short boundary and into the Harleyford Road.

De Grandhomme picked up the remaining two Northamptonshire first innings wickets, pinning Kerrigan leg-before for 12 with a full-pitched swinging delivery and then forcing Ben Sanderson sky to mid on when the No11 miscued an attempted smear.

Surrey head coach Gareth Batty said: “We have been very good all round in this game, starting with totalling 401 after being put in on the first morning.

“The captain [Rory Burns] led from the front, as he always does, and his hundred was backed up by another good innings from Sam Curran and then that century stand for the ninth wicket between Jamie Overton and Gus Atkinson.

“With the ball, we are looking very good this season with lots of options out there and Dan Worrall was brilliant in his first home game here. He bowled well without any reward last week at Gloucestershire, on debut for us, and he’ll take plenty of wickets this season if he keeps bowling like he did in this match. He was fantastic.

“It’s a very long season, as I’ve said before, but  we have started very well and we’ve also managed to give rests to a couple of our quicker bowlers, to try to keep them fresh, and we’ve dealt well with other players getting injured or not being available. I’m very pleased with where we are after five rounds.”

Northamptonshire head coach John Sadler added: “First division cricket is relentless and they bowled superbly throughout. But I still look back at having them 270-odd for eight and if we’d had a bit more fortune and bowled them out for 300 it could have been a different game.

“Emilio Gay showed some real courage under pressure today, and it was quite bizarre how he got hit on the same spot on his elbow three times. He was hurting out there but he also played some magnificent shots in his 51.”

Surrey are at Kent from May 12-15 for their next Division One match.