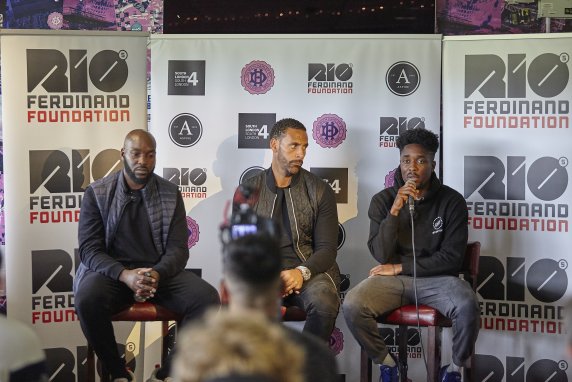 Rio Ferdinand wants to deliver a “strong message” that there is “another fork in the road” for young people in south London and urged more local businesses to become involved in an initiative his foundation has jointly launched with Dulwich Hamlet and the Aspire academy.

The South London 4 South London (#SL4SL) campaign aims to build a network of businesses and grass-roots organisations to create a more visible route into a career they are passionate about for young people in Lambeth, Southwark and Lewisham.

Former England and Manchester United defender Ferdinand was at the launch of the campaign last Friday at Champion Hill with Dulwich Boss, Gavin Rose, who founded Aspire sixteen years ago, and Hamlet player Nyren Clunis.

“There is a lot of negativity that surrounds young people today, especially in south London,” Ferdinand said. “But the people that are writing those stories need to look elsewhere as well for positivity because there is that in south London, there is so much of that about.

“It’s about saying to young people, ‘yes, there are problems but there is another fork in the road, you can choose a different direction.’

“That’s where we come in in terms of trying to create opportunities. Without opportunities there are a lot of kids that are disillusioned, they don’t know where to go, they’re confused and lost.

“Tech is a huge part of what we’re doing as a foundation as a whole. We’ve some great stories of kids that are now working in big corporate companies through being fast-tracked through some educational courses that are specific to what job they’re going to be going into.

“What we’ve seen from the feedback that we’ve had is that if a kid can get an opportunity that they’re interested in then they’ll be a lot better.

“From a business point of view, if you highlight a job that you’ve got and you say, ‘we want a kid who likes tech, or wants to do coding, we’ve got a space waiting here in six months if they get the right qualifications’, that’s the big strong message we would love to send out to the local community and businesses.

“Society in general understands that technology is almost at the heartbeat of everything we do now. More and more jobs are coming that we didn’t know about five, ten years ago. There are jobs now that weren’t there two years ago.

‘We’ve got to make sure that young people now are at the forefront to get into these particular industries. We’re from an estate, there are loads of estates in south London, and you wouldn’t know about certain jobs. It’s about making young people aware of different jobs out there.

“It’s always been said that young black boys are interested in entertainment, music, and just sport, but that’s not the case. Sometimes they’re not made aware of other opportunities out there.

“That’s where local businesses have to take more responsibility because the jobs of the future are going to be hugely based around technology.”

Rose added: “Sixteen years ago we set up Aspire and it was aimed at trying to give young people an opportunity to train as professionally as possible. But also they had to keep on with their education.

“We had some boys who turned up only to do the football but realised they wouldn’t be able to do just the football, they had to get their qualifications. As time went on some actually realised that it was education giving them the path to find employment and the football was maybe a slimmer chance.

“When you’re in an environment where everyone thinks the same way it’s going to be very difficult for them to get out of that.

“That’s why the environments we are trying to create are important for the next generation and this generation.”

Ferdinand explained why Dulwich Hamlet were the ideal club to partner with.

He said: “Obviously it’s Gavin’s ten-year testimonial with Kads [Hamlet assistant manager Junior Kadi]. That’s definitely one pull. But the other thing is that this club is steeped in the community. I’ve been down here over the years, I’ve brought my kids here and I just let them run off. I don’t do that anywhere else. You can feel the community vibe here.

“That’s very hard to find in today’s game with a lot of clubs because with most clubs a lot of it is corporate. Here, yes it’s non-league, but you get the vibe when you come here that there are people who care about the club, and most importantly care about the wider community.

“There wasn’t any better place to start than here.”

Rose said: “The people at this club, supporters and officials, do have that conscience where they try to help people, they care about people. That’s probably the reason why I’ve stayed at this club so long.”