Hamlet secure promotion to National League South in May 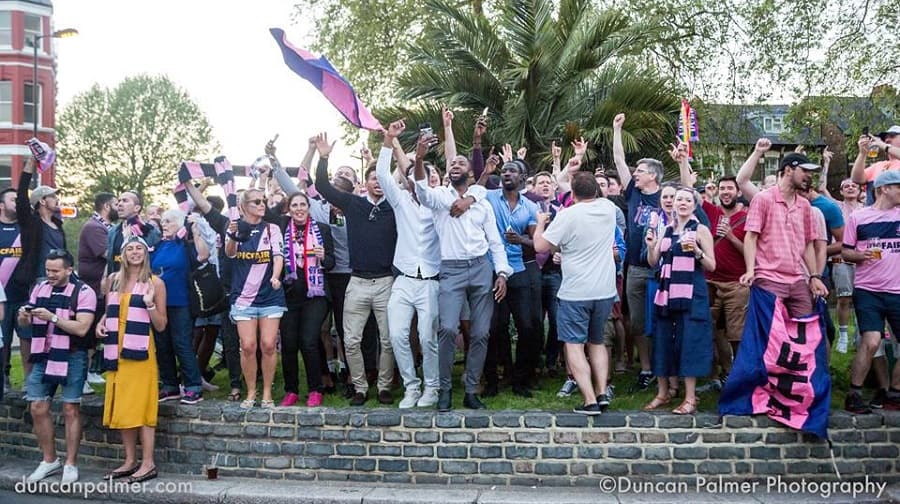 DULWICH HAMLET’S historic promotion last May has left at least one quirky legacy.

Hamlet defeated Hendon in the Isthmian League Premier Division play-off final to gain a place in National League South for the first time in their 125-year history.

Celebrations went on long into the night, with manager Gavin Rose, his squad and hundreds of supporters gathering at Goose Green Roundabout bringing the Village to a standstill.

Hamlet had done it against all odds, in the shadow of not just three successive play-off failures, but having dealt with being locked out of their home at Champion Hill by their landlords Meadow Residential in the latter part of the season.

They soldiered on at Tooting & Mitcham’s home ground, where on May 7 Dipo Akinyemi stepped up to fire home from the spot and seal a dramatic 4-3 penalty shootout win.

There was a party back in Dulwich later on that evening, with Goose Green the scene of emotional celebrations.

Now, if you search for the roundabout on Google Maps, it is identified as Dulwich Hamlet Promotion Roundabout, and features an image of some of the players. The reviews also heavily reference that historic May day.

Guy Haslam added: “A brilliant roundabout made even better by the Dulwich Hamlet promotion party of May 2018. We came, we saw, we drank beer, we sang and then we tidied up.”

“Site of extended celebrations following Dulwich Hamlet FC’s promotion to the National League South on May 7th 2018,” D Chapman wrote. “This in their 125th Anniversary Year having been forced out of their Champion Hill ground by Meadow Residential. What a team, what a match and what a night!”