Surrey secured their first win of the season after seven games 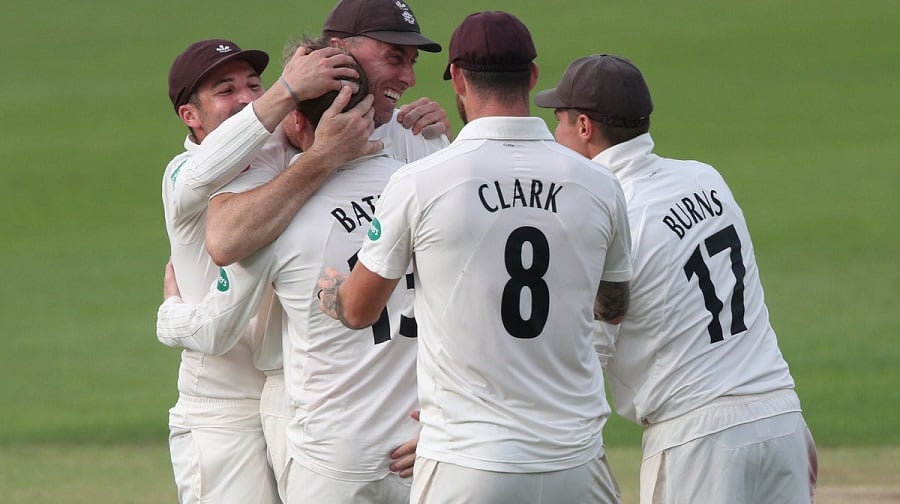 All-rounder Jordan Clark has used his first two Specsavers County Championship appearances for Surrey to show he has the ability to develop into a regular red-ball player.

The 28-year-old winter signing from Lancashire has had his moments with both bat and ball in the games against Yorkshire at Guildford and victory against Warwickshire at the Kia Oval – matches in which Surrey’s four-day fortunes have clearly turned around following an injury-hit start to their title defence.

Rory Burns’ side would surely have gained their first Championship victory against Yorkshire but for bad weather, but they then recovered from a poor opening day against Warwickshire to run out 74-run winners in some style.

Clark scored 61 runs in three innings in Surrey’s last two matches and took five wickets from 37 overs bowled at a cost of 26.80 runs apiece. They may only be modest figures at first glance, but with the bat he was coming in low in the order and, with the ball, his return to full fitness was evident in his increased pace as well as an ability to find swing throughout the game.

He has also settled well in London and looks capable of being the longer-term successor in all formats to his namesake, Rikki Clarke, who will be 38 in September.

“It’s been great here so far,” said Clark, who played in a number of Surrey’s Royal London One-Day Cup matches earlier in the summer when not fully match fit, due to the squad’s chronic injury list.

“Everyone has been very welcoming, and they have made it easy for me to fit in. When I was at Lancashire I always loved playing at the Oval – it was always my favourite place to play.

“So it was a great moment in the Warwickshire game when I took my first Championship wicket for Surrey at the ground and, although it was a bit weird batting down at number nine, I’m just happy to be playing my part and taking the responsibility of being the fourth seamer in the Championship side.”

The 6ft 4in tall Clark, a powerful striker of the ball, averages just below 30 with the bat in his first-class career and made his highest score of 140 at the Oval, for Lancashire in 2017.

He clearly has the ability to move up the order but it is his bowling which has perhaps even more potential.

Last summer, playing for Lancashire against Yorkshire at Old Trafford, he bagged what many believe to be the greatest hat-trick in English cricket history when he dismissed Joe Root, Kane Williamson and Jonny Bairstow in successive balls.

Clark added: “Earlier in the season I had a few niggles and some tendinitis but that happens in sport and I am now enjoying being fully fighting fit.”

Surrey’s eighth Championship fixture of the season is against Yorkshire at Scarborough, starting on Sunday (June 30) and the champions then return to the Kia Oval to play Kent on July 7-10.