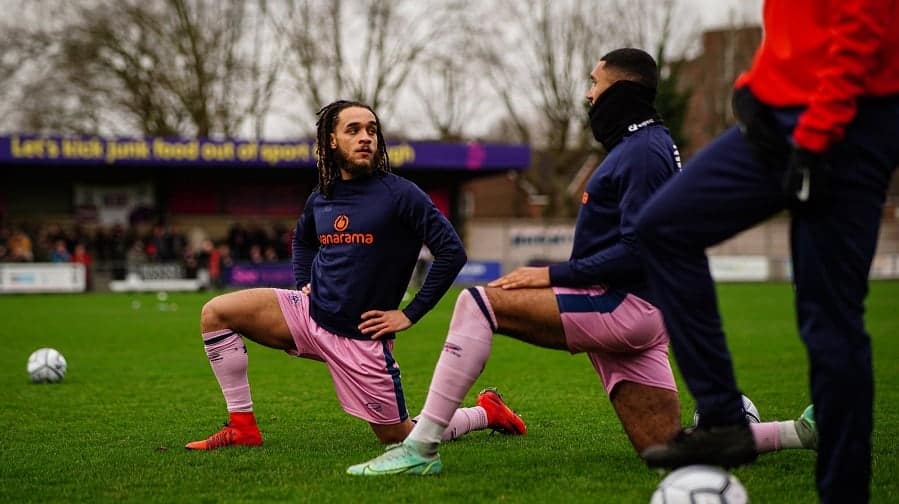 Reise Allassani made his return to Dulwich Hamlet but the majority in a fourth capacity crowd of the season at Champion Hill were left disappointed as the hosts lost 1-0 to Welling United.

Allassani, 26, started his fourth spell with Dulwich on the bench as the visitors started brightly with Charlie Grainger saving a shot from another former Hamlet player, Kristian Campbell.

In the sixth minute, Danny Mills got on the end of a cross to cause a scramble in the box before Jordan Green fired wide.

Green then found Jordan Higgs whose deflected cross was tipped over by goalkeeper Jack Sims. From the corner Mills had a header blocked close to the line before Welling managed to scramble the ball clear.

Set-piece specialist Gio McGregor then fired a 30-yard free-kick wide before Green and Higgs set up Darren McQueen in the box but he couldn’t get his shot away.

McGregor sent another free-kick over the bar before Welling finally had an attack of their own as Grainger held former Millwall attacker Mason Saunders-Henry’s effort.

Mills then tried an overhead-kick from Andre Blackman’s cross from the left but the ball went just wide.

Gavin Rose’s side continued to press and Higgs and McGregor had attempts blocked as an away defence including Millwall loanee Arthur Penney stood firm.

And it was the Wings who went closest to going in at the break ahead when Saunders-Henry set up Akinyemi for a shot that Grainger tipped onto the post.

Welling were a real threat after the break as Grainger was forced into saves by Akinyemi, Saunders-Henry and Campbell.

Welling went in front eleven minutes into the second half when a long ball forward found Akinyemi who raced clear to beat Grainger.

Allassani then came on for Tyrone Sterling to go up front with Mills as Rose switched to four at the back.

With fifteen minutes left, Michael Timlin found Green on the right but Sims saved at the near post.

The Hamlet then almost gifted the visitors and Akinyemi a second by giving the ball away but the forward’s shot was blocked inside the box.

The hosts committed more players forward as they sought an equaliser and Jack Holland headed wide from Blackman’s cross in the 83rd minute.

But Akinyemi was still a consistent menace and he held off a couple of tackles before firing towards the near post to test Grainger again.

Dulwich then went agonisingly close to a leveller when substitute Deon Moore reached Blackman’s cross but his looping header hit the top of the crossbar.

The Hamlet had one last chance in the 90th minute when McGregor sent a free-kick into the box but Mills’ header was saved by Sims.

It was Welling who went closest to scoring in the four minutes of added-time when after another goalmouth scramble the ball was cleared off the line.

The result left Dulwich sixth in the table, eight points off top side Maidstone United with two games in hand.

Rose’s side travel to fifth-place Dartford this Saturday for a 3pm kick-off.