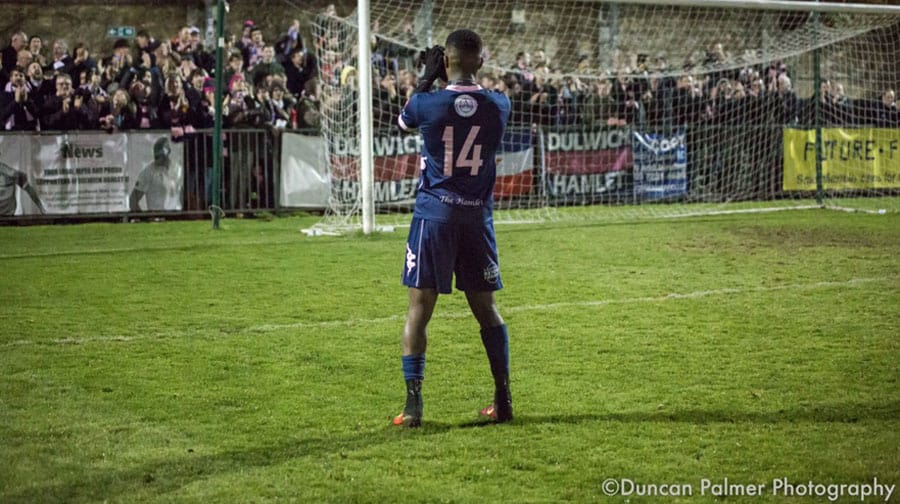 DULWICH HAMLET gained immediate revenge against Billericay Town with a 2-0 win on Tuesday night having suffered a three goal defeat to the same opposition at the weekend. Ibra Sekajja and Ashley Carew’s first-half strikes consigned Billericay to defeat, as Hamlet moved into the play-off places and still have games on hand on those above them.

It was all the more impressive given how different it was four days earlier against big-spending Billericay, who made two eye-catching signings recently. Former West Ham and Liverpool defender Paul Konchesky joined the Essex side last month, and Jamie O’Hara followed to give them vast Premier League and Championship experience. O’Hara – possibly more known to some for a stint on Celebrity Big Brother this year than his time at Tottenham Hotpsur and Fulham, among others – put a marker down in the opening five minutes on Saturday by twice going close with free-kicks.

It was Hamlet’s fourth game in eight days and they looked tired in front of an impressive crowd of 2,805. The away side took the lead in the ninth minute when a long ball caused confusion between goalkeeper Preston Edwards and Matt Drage and Adam Cunnington took advantage to score. O’Hara was then booked for a foul before Carew saw a free-kick saved. Dumebi Dumaka then went close to an equaliser before Billericay made it 2-0 in the nineteenth minute through Joseph Ellul.

It got worse for Gavin Rose’s side when with just half an hour gone Jake Robinson headed in a third. After the break Carew and Billericay substitute Mekhi McLeod were involved in a flare-up that saw the latter sent off, but Hamlet couldn’t capitalise on the extra man as Omar Koroma’ late header was ruled out for offside. Just days later, however, O’Hara was nowhere near as influential as Hamlet registered one of their most impressive performances and results of the season.