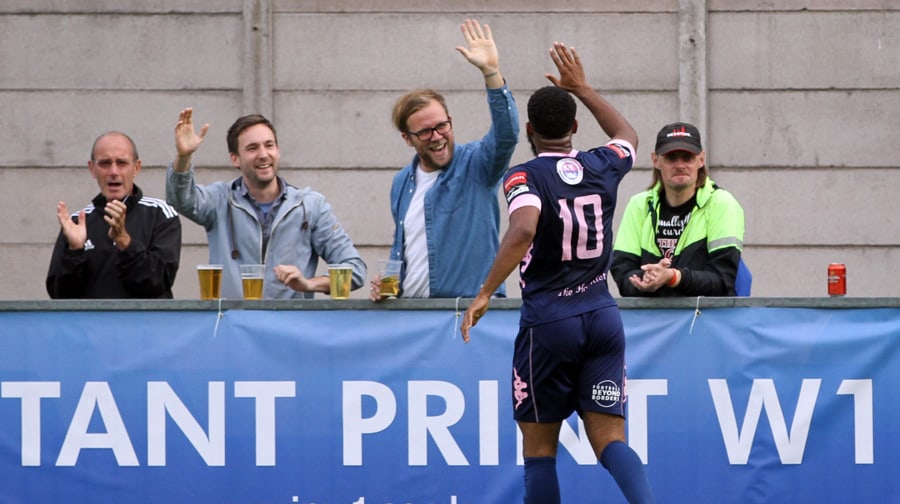 The Pink and Blues have made a stuttering start in their latest Ryman Premier Division campaign, but at the weekend they took their chances and dispatched their visitors with some aplomb.

But it was the Kent side who took the lead when Joe Taylor took full advantage of a Michael Chambers error. But Hamlet responded in resounding fashion and by half-time they were two goals ahead thanks to efforts from Sanchez Ming, Gavin Tomlin and Nyren Clunis.

Although the game was not totally one way traffic in the home sides favour they scored another three second half goals, with Alex Teniola bagging a late brace after Daniel Carr netted from the penalty spot. After the weekend round of fixtures Dulwich are in seventh spot in the Ryman Premier Division after nine games.

They sit three points off the play off spots and ten behind Leiston who topped the table on Saturday evening. On Tuesday night against Harrow Borough the Champion Hill side were brought back down to earth after suffering a 4-1 defeat at home.

Nyren Clunis netted after Harrow scored two early goals from David Taylor and Lewis Driver, and Borough finished the job in the second period thanks to two Ibraham Meite efforts. This Saturday Dulwich travel to Enfield Town for a rearranged league contest that starts at 3pm.

They follow that up on Tuesday evening with another away league encounter, this time at Lowestoft Town.