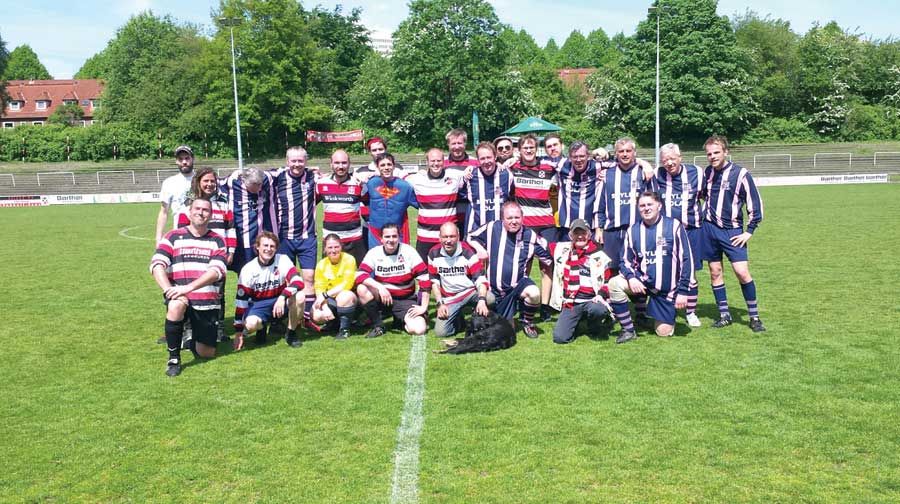 Fans from Dulwich Hamlet kicked off a distinctly German summer for them when they travelled to Hamburg to take on counterparts Altona 93.

The two clubs have built up a special relationship in recent years and that was cemented last weekend when Pink and Blue fans donned the famous kit at the home ground of the German club.

The game ended 3-3 with Jan Schroeder netting twice for Hamlet and News reporter John Prendergast bagging their other effort. Martin Distler, Julian Buttkus and a Shaun Dooley own goal made up the scoring efforts of the home side. But the weekend was more about cementing the relationship between two clubs formed in the same year.

Supporters’ team boss Dooley said: “Relationships are easy to build in our country.

It is harder to do the same thing with overseas clubs. “But I think Dulwich and Altona fans are on the same wavelength with our values and as always they look after us when we visit and I would like to thank them all for that.” The Altona first team will be coming to England in July to take on the Hamlet first team, and another supporters’ game will take place that weekend.

Altona fan Jan Stöver, who helped organise the contest, added: “I think it’s an important relationship we have and it was an honour to have the Dulwich fans as guests. “It is what football is about, meeting new friends and having a drink together afterwards.”

Dulwich have also announced a number of extra games that have already been put in place for pre-season. Sides Dulwich will take on include Peterborough United, meaning the return of fans favourite Erhun Oztumer, Dagenham and Redbridge, Charlton and Altona 93. For a full list of fixtures, including times and dates, visit www.pitchero.com/clubs/dulwichhamlet.