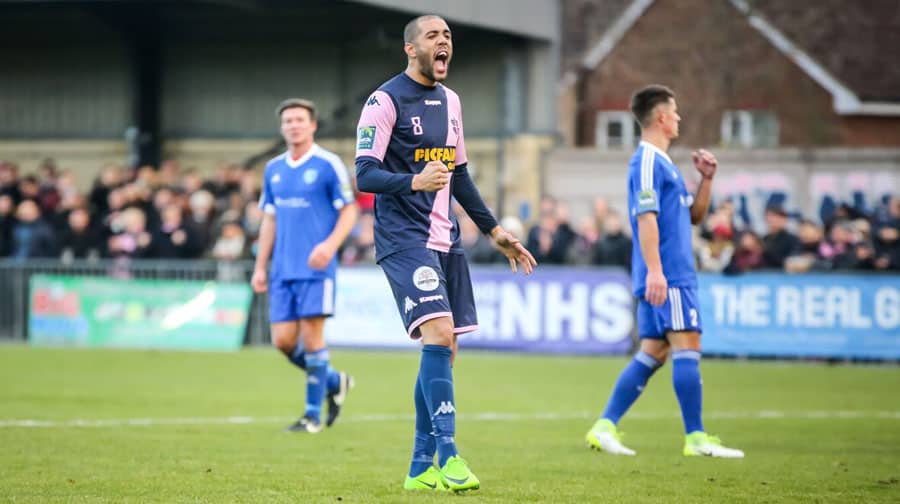 ONCE AGAIN, Dulwich Hamlet put the ongoing concerns over the future of the club to one side as they defeated Brightlingsea Regent 2-1 last weekend.

First half goals from Ashley Carew, from the penalty spot, and an effort from Reise Allassani secured the points for Gavin Rose’s side. The result meant Hamlet remained two points clear of Billericay Town in second in the Bostick Premier League table, before the division’s big spenders faced Brightlingsea on Tuesday night, one of their four games in hand. The Dulwich side are eleven points clear of Staines Town in third ahead of their trip to Tonbridge Angels on Saturday.

Dulwich had to work hard for their victory on Saturday as they found opponents willing to sit deep and try to hit the hosts on the counter-attack. Carew was again the orchestrator early on and he saw his free-kick deflected wide after Allassani had been brought down. It was little surprise that Dulwich found the breakthrough after half an hour.

Carew’s corner caused consternation in the box, and defender Matt Cripps, under pressure from Marc Weatherstone, handled to give Carew the chance from the spot, which he took in emphatic fashion.

Four minutes later, the home side doubled their advantage in impressive style, Allassani gaining possession outside the box before racing away from a number of defenders and finding the bottom corner.

Hamlet appeared to have complete control of the contest at that point as they looked to add a third, but just before half-time they gave their opponents hope as Ibrahim Kargo lost possession and Ricky Griggs beat goalkeeper Preston Edwards from 25 yards. Brightlingsea were clearly boosted by that goal as they showed more willingness to attack Dulwich after the break. However, Allassani had the chance to restore the two-goal advantage after being released by Nana Boakye-Yiadom, but his shot was blocked.

Sensing there was an equaliser in it for them, Brightlingsea pushed their opponents back, and Rickie Hayles had to head clear after Edwards’ punch fell short.

Edwards then saved from Griggs before, from the corner, the stopper tipped over a header from Josh Gould. Carew then tested Harry Palmer with a free-kick that the goalkeeper saved, before Brightlingsea countered and Edwards denied Hayles.

Edwards again came to his side’s rescue as he again denied Griggs, before the ever-dangerous Allassani saw his shot deflected wide. Dulwich survived some late pressure as they just held out for the win that keeps their promotion drive on track.