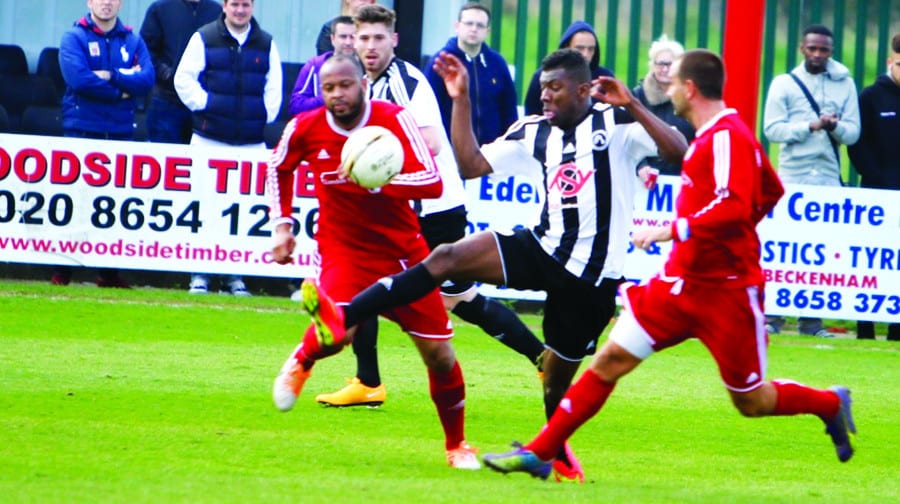 Fisher will hope to build on their fine recent form

Safety from the drop was secured over the Easter weekend and the Fisher manager, who has been in post since December, told the News he hopes recent good results are a sign of things to come.

He said: “There is a sense of relief at what we have done [avoiding relegation] and also one of achievement. We have all worked hard to get to this point. “It is something I think is sustainable and we will continue to build on this. We want to be a top half side next year and be competing with those sides up there.” On Saturday Fisher picked up another three points when they defeated Tunbridge Wells 3-0 at Champion Hill.

At the weekend two goals from in form frontman Luke Haidarovic and a Femi Akinwande strike enabled Fisher to pick up their fourth win in six games. The form of the experienced duo Dave Waters and Haidarovic has pleased Harrison and he confirmed he will be seeking to secure their services next season.

The Fisher manager added: “Those guys have been great since they come in and I will be speaking to them about staying on. With Luke we would like to build a team around him as he is a great focal point up front “It’s not only that as he has been great off the pitch too with the way he carries himself and the way he always gives 100 per cent.” On Tuesday night Harrison made nine changes for the LIngfield game as he ran the rule over a number of players with a view to next season.

The game in Surrey ended 2-1 to the home side as Kieran Scantlebury’s second half goal was not enough to claw back a half time deficit built up thanks to efforts from Simon Wallace and Sam Clemence.