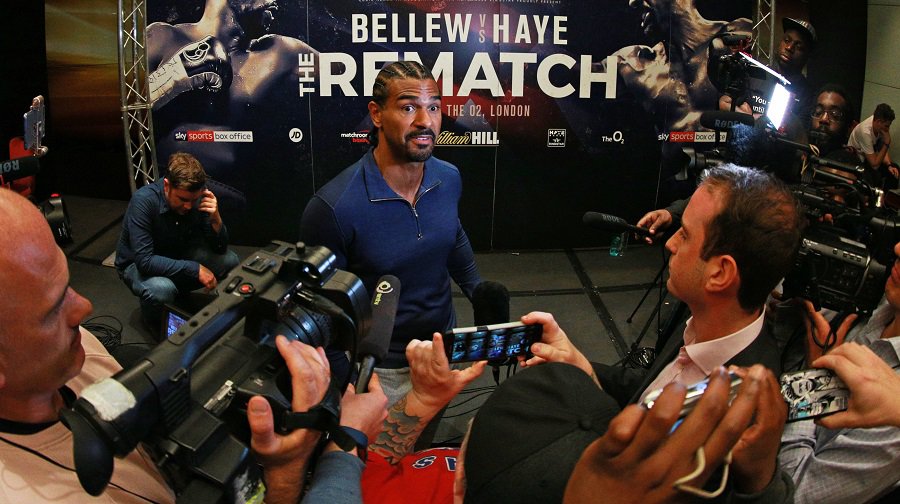 TEMPERS FLARED at the final press conference before The Rematch this weekend – but David Haye played it all down insisting Tony Bellew “isn’t the puppet master this time”.

The pair went nose to nose in the final publicity event before their scrap at the O2 Arena this Saturday night, before Liverpudlian Bellew shoved Bermondsey’s former two-weight world champion and hurled insults in his direction.

Earlier in the week, at a publicity event in Liverpool, both fighters were in confident mood.

“I’m just going to do what I do, and enjoy it,” Haye said. “I’m relaxed. I’m ready. It may not be early. It may be very late. I might aim to do something I’ve never done before.

“I always aim to take people out early but I might try something different. But it will be a knockout, a TKO, a referee stoppage or the towel will come in. He will not hear the final bell. Bellew’s trainer Dave Coldwell is a compassionate man. He will need to be vigilant for his man on Saturday night.”

Bellew added: “On Saturday, it comes to an end, it really does. For the first time in your career you are actually fighting for your career. If this goes wrong, nothing can save you. I’ve done this five or six times. I know the kind of pressure it brings. You’re in a lot of trouble on Saturday.

“David was amazed that I took the rematch. I’m doing it, and I’ll do exactly what I did in the first fight. David is not back to win world titles, he’s back to try to rob the bank. He wants to fight little fatties like me.

“Expect a cagey start, he’ll show me the respect he should have shown me in the first fight, I’m sure. Saturday is time to go to war, and his career ends in a beat.”