Haye hints he could continue despite Bellew loss

The Bermondsey fighter fell to his fourth defeat in 32 professional bouts. 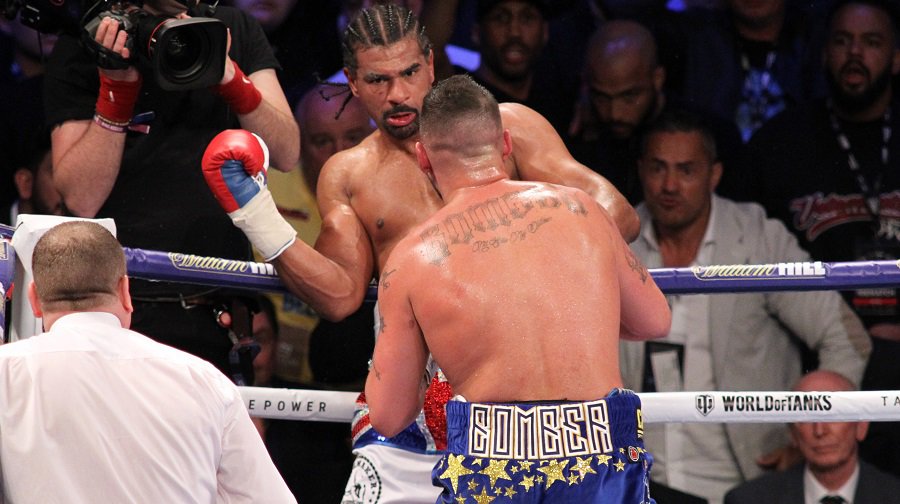 David Haye hit the canvas three times as he lost his rematch against Tony Bellew. Image: Action Plus

DAVID HAYE hasn’t revealed if he intends to retire or continue boxing after his second loss in fourteen months to Tony Bellew last weekend.

Haye, 37, was dumped on the canvas twice in the third round before the referee stepped in and stopped the bout after the Bermondsey fighter was dropped again in the fifth.

The former two-weight world champion said he would “review the tapes” before making a proper assessment and spoke of “keeping the momentum going”.

But he has been urged to quit. Bellew told him in the ring afterwards it was time to hang up his gloves, and George Groves, who signed with Haye’s Hayemaker Promotions in 2009, added his voice to that sentiment this week.

Groves said: “David was kind and generous to me when I turned pro. I learnt a lot from him in the early part of my career.

“I won’t forget that. I hope he finds his new calling, I hope he’s happy, I hope he never decides to fight again.”

Haye posted a classy message on Instagram after the fourth defeat of his 32-fight professional career.

He wrote: “We promised the rematch would be another epic battle, and despite not getting the outcome I so desired, it certainly lived up to the hype.

“Thank you to everyone who packed out The O2 Arena, tuned into Sky Box Office or piled into their local pub to witness it live.

“The energy in the build-up and as I stepped into the arena in my hometown was something I will never forget.

“Thank you to Tony and his whole team for their part in creating this. Being part of fight nights…those which pack out arenas and divide boxing fans are what you dream of as a child.

“I enjoyed every moment of this fight campaign, from the lung busting sessions, the press conference shenanigans, early nights, clean living and even the tear-up itself.

“You can never complain when you have been able to fulfil your childhood dream whether you win, lose or draw. I’m incredibly fortunate.

“Your messages of love and positivity have been overwhelming, aside from the natural disappointment and a few bruises, I‘m good.

“Tony, you are a brilliant dance partner, you proved many doubters wrong and were without question the deserved winner. Your family, friends and those you were fighting in the memory of, should be incredibly proud of their ‘Bomber’. Congratulations Champ.”

Southwark NewsSportHaye hints he could continue despite Bellew loss