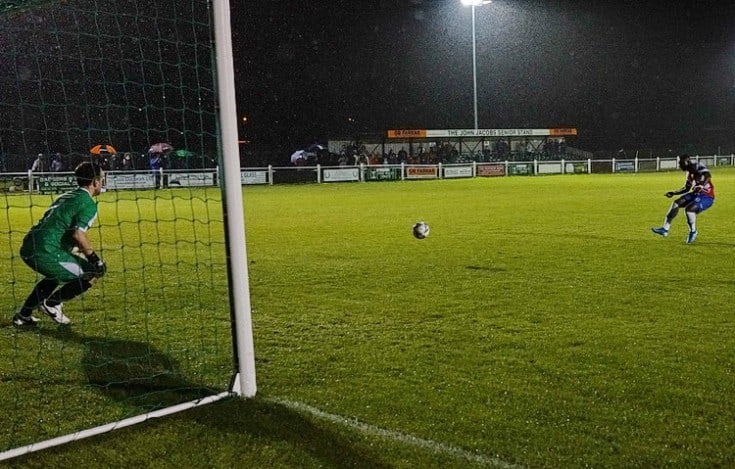 In one of the first games in London to be played in front of fans since football resumed, an attendance of 159 were treated to a classic finish at Cray Valley Paper Mills’ ground in Eltham after a goal-less 120 minutes.

Town goalkeeper George Legg saved from Paul Maas after Cubo had scored their first from the spot and Jay Virgo equalised for Peckham.

Marcus Black then put Peckham ahead when he rifled his penalty into the top left corner. Peckham edged closer to glory when Cubo substitute Samuel Brooks sent his penalty over the bar.

Jefroy Leslie kept his nerve to make it 3-3 and send the shootout into sudden death.

Nicholas Chan fired over for Cubo, but Youseff Bouimane couldn’t win it at that point for his side as his attempt came off the crossbar.

Matthew Laing then piled the pressure on Kevin Dance, who had to score, and he kept his composure to make it 4-4.

The drama was unrelenting and when Barney Tierney sent his spot-kick wide, the stage was set for substitute Tidian Barry. He grasped his chance by firing straight down the middle to send Town into ecstasy.

“They gave me 110 per cent out there, I can’t take anything away from them,” Peckham boss Mary Phillip told Kentish Football.

“They went out and did exactly what was asked off them. They played their game and went out and enjoyed the occasion and fought for every ball. It was die-hard out there.

“The goalkeeper was outstanding, George Legg was my man-of-the-match, kept us in the game first half and kept a clean sheet for us in the second half. He kept us going, kept that spark alive for us.”

There was added emotion and poignancy in the win, after Town have had to deal with continued destruction of their stadium and training facilities by vandals, something the News has continued to highlight.

Phillip added: “It’s a massive lift. Obviously Covid’s come along and there’s nothing we can do to control that. But our ground and training ground has been vandalised so to actually take this trophy back now regardless of what’s been going on and all of the stuff we need to be doing…it’s amazing.”

The Menace will kick off the new season at home on Saturday against Borden Village (Kick-off: 2.45pm). Entrance is only £3 for adults (free for under-16s), or a season ticket can be purchased for £30, which will provide entry to 15 home league matches this season.  You can secure a season ticket by visiting tiny.cc/MenaceST2021.