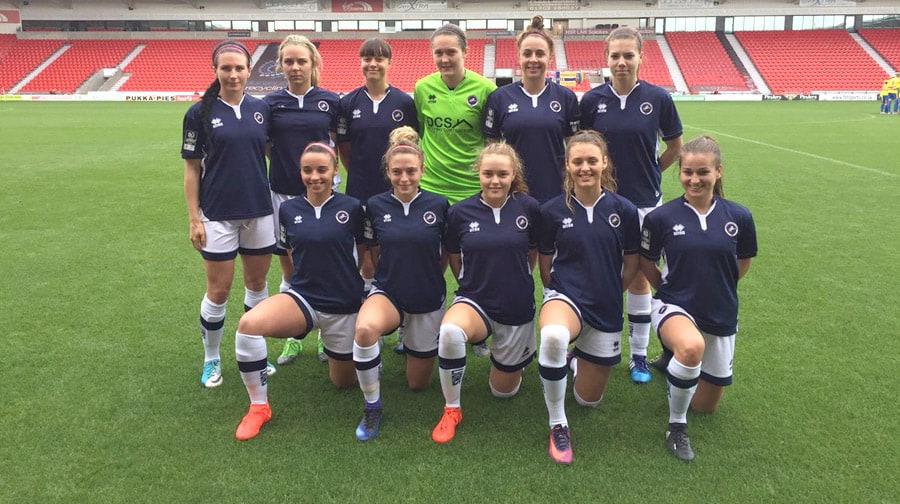 ASHLEE HINCKS scored four minutes from time as Millwall Lionesses came back from two goals down to draw 2-2 at Doncaster Belles in their FA WSL 2 clash last weekend.

Rebecca Rayner and Rhiannon Roberts put Doncaster two goals up inside half an hour, before Charlie Devlin gave Lee Burch’s side hope by pulling one back just before the half-time break. Hincks, who had earlier struck the crossbar with a free-kick, ran onto a long ball in the 86th minute to finish past Belles goalkeeper Jules Draycott to earn her side a point.

“I’m really happy. It’s always a difficult place to come here,” Hincks said. “I don’t think we deserved to be 2-0 down but to come back and get a point shows great resilience. “Because we were dominant, even when we conceded the second, I still thought that we were in this game. “We created so many chances and I just knew that we would take one.

Getting the goal just before half-time was key because obviously we came out with momentum in the second half and they were the opposite. “I think it was so important.

As our manager says, if you can’t get the three points then at least go and get a draw. “I think it was important that we didn’t fall away. It’s a long trip home with nothing to show for the game. “It’s always nice to score, of course, but it’s about the performance and the team today so that’s really pleasing.” Lionesses manager Burch added: “It was a really good performance. It was weird because, like Watford last week, even when we were 1-0 down I was happy with the performance.

“The killer was the second goal which really put us on the back foot for a while. Doncaster were putting us under pressure. But overall I was happy after the first half. “We changed things tactically at half-time and that proved to be a big decision. The goal before half-time changes my whole team-talk.

“We had twelve or so chances and I would say half of those were clear-cut chances. We were a bit disappointed we had only scored one at half-time. “But Doncaster are a good team. To be 2-0 down and get a point shows the character and worth of this side. We don’t know when we’re beaten at the moment.”

The Lionesses face Brighton at St Paul’s this Sunday at 2pm. Burch said: “We won’t be taking any team in this league lightly, certainly not Brighton. We’ll go away and analyse this. We’re looking forward to it.”

Southwark NewsSportHincks to the rescue as Lionesses grab late point