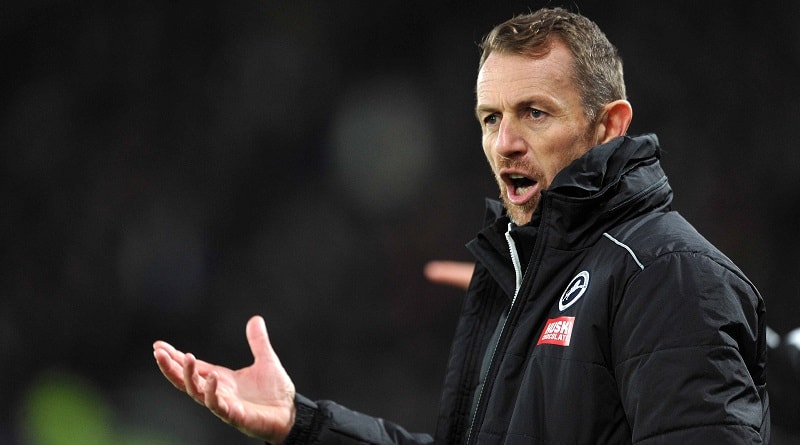 Gary Rowett felt Millwall fully deserved their 1-0 win at Preston on Saturday that moves the Lions to within four points of the play-off places.

Shaun Hutchinson headed home the only goal of the game in the 78th minute.

Tom Bradshaw had hit the crossbar earlier and after the goal Connor Mahoney had a chance to add a second but Declan Rudd saved.

“The first 10 or 15 minutes Preston showed why they’ve got the best home record in the division,” Rowett said. “They’ve been really well-coached and set up by Alex [Neil] for a few years.

“They’ve a lot of ability in midfield, a lot of movement. We didn’t help ourselves early on with some wasteful passes, they made it difficult for us and got into some good positions.

“But then we really got to grips with the game, not necessarily controlled it, that’s a bit conceited to say that, but I thought we played really, really well.

“We worked the ball very well wide to the wing-backs, the centre-backs stepped in at the right time. We saw that when Jake Cooper went through one-on-one with the goalie and couldn’t sort his feet out, we might have to do some work on the centre-backs’ finishing if they’re going to get that high in that system.

“We created some very good opportunities, we limited them to few chances. Our back three defended very resolutely. It would have been a shame if we hadn’t got the goal because we had the best chances by far late in the game. We probably should have made it a couple.

“We might have only won three away from home [before Saturday] but we’ve only lost at Leeds since the defeat in the first away game at Reading.

“We’re on the back of a really tough run. We’d five games, this the last, where I felt if we could get through those five still in touch with the top six we’d at least give ourselves a chance and something to be excited about.

“At the end of the day, we’re Millwall, we’re not expected to be up there. But at the same time we’ve got high standards and we’ve managed to maintain them pretty much in this period we’ve been in.

“It was a big result for us, a result we deserved against a tough side. It was really pleasing.

“Our performances have warranted us being up there challenging. I’m not suggesting that’s our aim. Our aim is to win as many games as possible and stay in the mix because we’ve worked hard to get there. We’ve worked incredibly hard at places like this.

“We’ve played a couple of teams where I felt the level was a bit too much for us, but a lot of games it’s been even.

“I just like the way we’re developing as a team, to come to a place like this and move the ball as well as defend was really positive.

“I saw some of Alex’s notes saying teams have started to respect them and sit in and make it difficult. That wasn’t our aim, to just block it up and get a clean sheet. It was to try to control the ball when we could, cause them problems with our system and deal with what they were going to do.

“I thought we did it pretty well.”