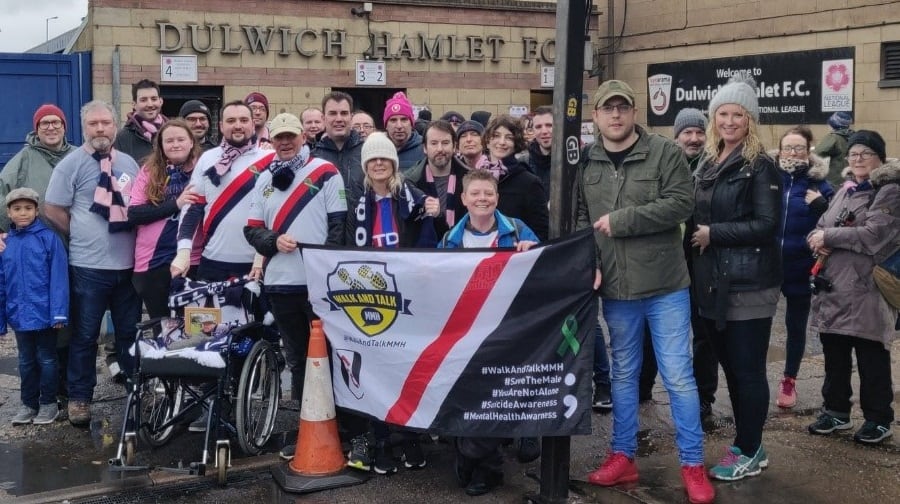 The group walked the ten miles from Welling United’s Park View Road to Dulwich, one of two walks last weekend after a mammoth 33-mile overnight trek from Livingston to Rangers for Saturday’s Scottish Premiership fixture.

The team set off 9am, stopping twice en route to the match which saw Dulwich beaten 1-0 by Welling, and included more than 20 first-time and experienced charity walkers, none more experienced than Ed Till and his late grandad, Philip Leverington.

A framed photograph of Phil, a lifelong Millwall supporter, and late in life a Hamlet follower and mental health awareness advocate, was pushed the entire way in his wheelchair by devoted grandson Ed, who had lived with him for fourteen years before Phil’s passing in January, aged 95.

Stood in Champion Hill’s wheelchair area on the exact spot his grandad used to watch from, Ed, 30, spoke about that extra-special latest walk.

“Grandad really cared about mental health and used to come on walks. He would sit in the wheelchair and I’d push him along. He never really had a mental health problem himself, but he cared.

“Walk and Talk is a mental health movement trying to target men’s mental health. Anyone’s welcome, loads of women come along, but we reach out to men because men seem to find it harder to talk. Every day we’re losing more than a football team’s worth of men to suicide.

“Even if you haven’t had a mental health problem, even if you just do an hour of the walk, come along for a walk, a bit of fitness, make some friends.”

Campaign founder Lee Adams, 36, also attended the Dulwich walk, having spent Friday night in contact with Walk and Talk’s Scotland participants, living every step of their mission in the face of Storm Dennis.

Speaking after his fourth walk of 2020, Adams could not have been prouder of his campaign compatriots in London and north of the border.

“I ain’t slept at all doing the social media for the boys and girls walking in Scotland last night, and was jumping on the bed this morning with excitement.”

Having suffered with his own mental health, Lee has established a free and simple, yet powerful movement, which has got people walking and talking between UK football grounds.

He added: “After going through my problems, I fell back into society and never wanted anybody to feel the way I felt, so in 2015 I tweeted that if I get X amount of retweets, I’ll walk from Fulham, my team, to Reading. Subsequently I got them and went.

“It’s built a community. We walked from Chesterfield to Notts County overnight the other week, we’ve walked to Birmingham, cycled to Preston, and did Reading to Fulham again New Year’s Eve. We celebrated the New Year on a roundabout in Bracknell, and it was the most amazing night.

“You’re walking to football so you’ve instantly got a bond with someone, then all of a sudden you start opening up a little bit more.” Keen, too, to applaud Lee, Ed, and Saturday’s walk organiser James Taylor-Nye were fellow walkers Rachael and Pete. Walk and Talk also encourages women to talk, which is extremely important to Rachael.

She said: “This cause hits home to me a lot because I lost my mum to suicide.”

Pete added: “Today there were supporters of Dulwich, Welling and other clubs. They’ll be barred from Selhurst for this but there were Palace supporters wearing Millwall scarves for [Ed’s] grandad. Walk and Talk, the clue is in the name.”

They also thanked Shooter’s Hill pub The Red Lion, which opened early for their first break, and each club which has helped support the campaign, including heavily involved Crystal Palace and Fulham.

“Walk and Talk is the charity partner for the match. Money has been raised and people can support it financially. But no collecting tins, no rattling cans, it’s all about awareness.”

Ed added: “Dulwich and Welling are great community clubs. At this level, your club supports the community and mental health is a key part of that. If people are suffering, not getting out and not being part of the community, then the community is losing out.

“There is a Walk and Talk GoFundMe, but we overtly shy away from walking along with money because it might put someone off.

“We tag up with charities like CALM and Samaritans, but we’re not affiliated with them. We’ll work together on a cause, but every walk is an individual project.”

Walk and Talk expects to confirm many more walks soon, which chief promoter Lee will make sure are well publicised.

“Come along, open up, talk about your problems, and you’ll meet the most amazing people.”

Grandad Phil’s funeral took place on Monday, and was attended by several Walk and Talk members.