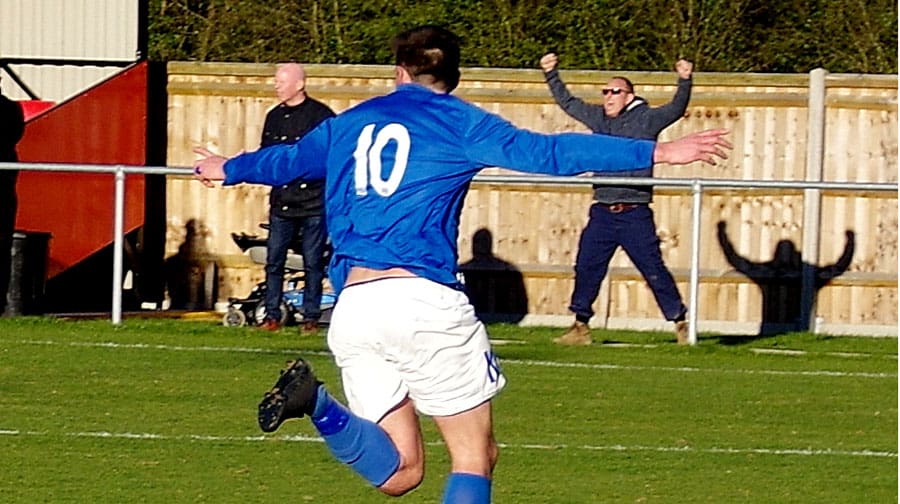 This was a feisty game played under clear a blue sky, but where the gusty wind played havoc with the playing conditions.

This was evidenced as early as the second minute when Owen Kesseck’s in-swinging corner was blown into the net at the near post to give Lydd the lead.

Despite the conditions Stansfeld gradually started to get a foothold in the game and get the ball down and play.

Billy Shinners failed to get enough power on a far-post header and then was thwarted by the Lydd keeper after taking a heavy touch when clean through on goal.

Stansfeld’s pressure was eventually rewarded when Aaron Evans netted his second goal in a week, after flicking a Harry Fox cross into the far corner of the net.

Lydd repeated their early breakthrough when they took the lead again, James Everitt converting from the penalty spot after veteran striker Steve Harris was controversially adjudged to have been fouled just inside the box A series of Stansfeld corners failed to produce any chances of note and it looked like they were going to suffer another defeat, but they got the reward their efforts deserved when from a long clearance by goalkeeper James Bradley, Billy Jolley superbly controlled a half-volley that flew into the top right-hand corner.

Stansfeld/Eltham Palace’s next game is away to Lewisham Borough on Saturday, April 8 in the Southern Counties East League Division One.

Kick-off is 3pm. The 1st Team lost 3-1 at home to Bexley at the weekend, Dominic Karmali with the Stansfeld goal. The Reserves suffered a heavy 9-3 defeat against Bexlians. Ryan Marley (two) and Billy Major got the Stansfeld goals.